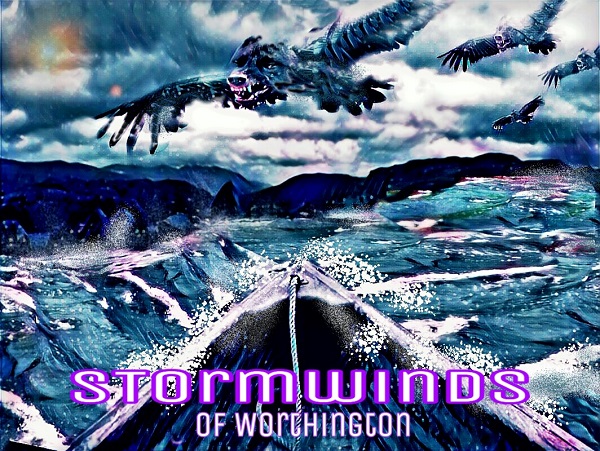 '...now critically endangered, all efforts to repopulate the species have, sadly, failed.'

Crowds jostled to get the best view into the enclosure. Pebbled 'beach', seawater lagoon and a huge rocky backdrop containing the caves. Tall Stormwood palms reached upwards, pointing to the electrified nets that separated the enclosure from the open skies.

Of the main attraction, there was no sign. The crowds shuffled, disappointed that they'd travelled all this way to look at an empty cage.

'If you look to your left, towards the green rock….' More shuffling and camera pointing as the rock pivoted inwards and a long telescopic arm glided into the enclosure, attached to the arm, a rather battered and scratched large metal box.

'We aim to feed the exhibits only once per week, this may sound cruel, but our researchers have found this keeps the animals alert, and promotes their natural hunting instinct. The lagoon is well-stocked with Crawlers and Spannerheads, but, as a special treat, we like to offer you fine folk an up-close view of their hunting capabilities!'

The box opened and, in a flurry of wings, half a dozen bat-like animals, each the size of a sheep, sought escape.

'Named, rather erroneously, by the first settlers as 'Seacats', these indigenous reptiles are closer to winged lizards than felines, presumably the black fur and pointed ears first prompted the misnomer?

'The native Stormtrees you see in our enclosure are another repopulation success, deforestation has had a dreadful impact on the planet, from the loss of habitat, up to, we now believe, even altering the weather patterns on this world. As their name suggests, storms are once more occurring across the globe, building every season, as these beautiful trees flourish!'

A shadow flitted across the enclosure. The crowd craned their necks, looking up into the Stormtrees, cameras clicking furiously.

'It seems our resident Alpha likes kitties, too!'

The keeper smiled and pressed the button, connecting the enclosures' microphones to the speakers around the viewing platform.

The howling was truly deafening, and truly frightening.

The audience glanced around nervously, checking there was nothing overhead, smiling weakly, embarrassed they had been so easily startled.

'Quite a challenging sound isn't it?' She lowered the volume and continued her script. 'Can you imagine how those first brave settlers felt when they heard that challenging howl?'

In the Stormwood, leathery wings unfolded.

'Scientist now believe the howling is, in fact, quite an intricate language, a hunting call, giving directions and tactics to the pack. Here, obviously, we only have a pair, but the interaction is thought to be the same as it would be for a large pack in the wild.'

'And just how many of these animals would be in a wild pack?' An arm waved with the question.

'Good point, sir! We know from ancient records that the first settlers encountered packs of seven or eight animals, however, much larger groups appeared with the planetary storm cycles. These mega-packs, or Storm-Swarms, numbered from hundreds to just over one thousand animals!'

Shocked gasps as her audience tried to imagine such s scene.

'Tragically, the original settlement site, Hope's Landing, (We'll visit the ruins later in the tour), was overrun by such a pack some twenty years after the planet was colonised. The survivors didn't understand the planetary cycles way back then, and equally tragically, over eighty percent of the human population was wiped out some thirty Terran years later.'

In the trees, the howling stopped. Two huge beasts launched simultaneously from left and right, wings filling the air.

'Three hundred years on. The mining companies, dredgers and colony building, took their toll on the natural ecosystems of the planet. Following the Great Storm of ‘59 and the carnage the mega-packs brought to the colonies, it was decided that a planet-wide cull would take place, hunted for sport and gain, they were almost wiped out, we believe only a few animals surviving, in the uncharted barren islands of the deep southern oceans.

'Humankind had, once again, escaped a ruined homeworld, and blindly set about turning this new Eden into the same overpopulated, polluted mess they sought to escape!'

Shrieks from the enclosure as a Seacat was plucked from the air, swallowed whole in the blink of an eye.

'Happily, those times are long past, lessons finally learned, we now have flourishing ecosystem, this world has shown a remarkable ability to thrive. Fish and animal stocks are probably at three-quarters of the numbers they were, not only pre-industrialization, but, we believe, almost at the levels they were before the Hope landed! A great accomplishment, all but the predators you see here that is.'

The two exhibits were now squabbling and howling over the last few scraps of fur and bone. The Alpha snarling as it took the remains back up into his cave. The Beta snarled at the crowd through the glass before retreating to her own lair.

'Why not just breed them here?' The same wave, obviously an amateur zoologist!

'Another great question! Even now, we just do not know enough about the breeding cycle of the animals. Indeed the Alpha has rudimentary reproductive organs, the Beta none at all!

How these creatures bred and flourished remains a mystery. They simply do not mate, at least not in captivity, and without access to a wild pack, we can only guess at how the population is, or was, maintained. We do know that , historically their numbers grew with a pattern of increasing storm activity, and that they are extremely long-lived, our Alpha is estimated to be over two centuries old!'

From the caves a deep howl.

'Ok, old timer, we're moving on!' She smiled and gestured to her audience to depart.

'Do you think they'll survive?' A sombre hand this time.

'Despite being a protected species for almost a century, there now remain just six pairs left in captivity. They have been extinct in the wild for over a quarter of a century. We live in hope that, one day, these magnificent creatures may replenish their numbers and the skies of the planet will echo once more with the howls of the Windwolves of Worthington!'

The tour moved on, eager to explore the gift shops of the lush islands before lunch.

Deep beneath the burning sands of the Ember Isles the queen stirred.

Her two guardians, aged Alphas both, caught her changing scent in the still air of the stifling cave. Her metabolism quickened, coming to consciousness from a long dormant state, the Alphas pawed at the sand, digging out their queen, yelping with excitement.

The first scent of the promised storm reached them, even down here, the air becoming charged with the promise of lightning.


Above them, the sands shifted as the winds came.

Once the queen had been freed. The Alphas sat and waited, enticing, stimulating scents came from her pelt, turning their heads upwards, teeth bared, hackles up, the Alphas howled at the coming storm, eager to service their queen after so very long.

The queen uncurled her ancient frame, fur bristling with static, hormones and endorphin levels rising with the winds, pheromones triggered by the electricity in the air.

Satisfied their huge queen was fully receptive, the Alphas approached, still nervous of her claws and teeth.

Mating season was always a matter of life and death for Alphas.

The Twins rose, painting thunderheads red and purple. Beneath the sands, in the eye of the fledgling mega-storm, the now pregnant queen devoured the last pieces of Alpha, needing her strength to birth her swarm.

She felt new life, already squirming inside her, and greeted the howling winds with her own deafening voice.

The six hundred holidaymakers at the Captain's Cove nature reserve resort were not happy.

Three days now, and all excursions had been cancelled, all domestic and interplanetary flights grounded due to the unexpected weather conditions.

The local traders, however, were ecstatic, happily running barrels of wine and boatsfull of food across Ensign's Bay for the tourists; it seemed that as the weather worsened, so their appetites grew!

As the waves rocked Shana's heavily laden vessel, she cursed the winds, cursed the icy spray and cursed the pampered tourists!

To Hell with easy cash, if she floundered this far out into the bay, she was Crawler food for sure.

Another huge wave broke against the boat, the deck temporarily vanished in the seawater swell. Crates came loose and she cursed again as two dozen bottles of oil were lost overboard.

Driving rain and howling winds obscured her view, losing sight of the harbour, Shana rowed with all her strength, expertly guiding the boat landward, despite the storm.

Lightning flashed and the winds howled with increased ferocity.

Howled like nothing she had heard in all her thirty years.

She squinted through the rain at the vast black clouds overhead, frowning as she realized the cloud was moving against the stormwinds.

The howling became deafening as three figures broke from the blackness, plummeting towards the bay, wings swept back as the Windwolves swooped upon their prey.

The swarm flew on, the pack drawn by the twinkling lights of Captain's Cove and the tantalisingly faint scent of meat.