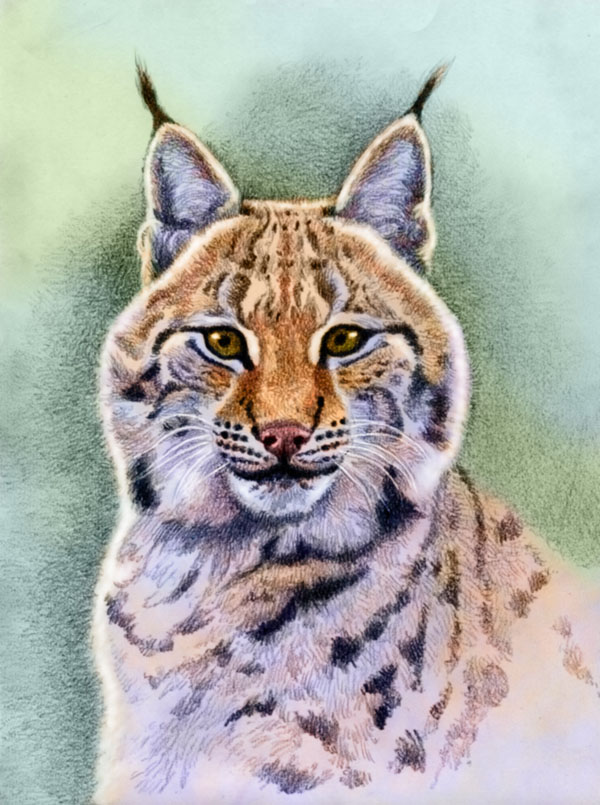 An impressive kitteh yet again! This is a Eurasian Lynx, Lynx lynx. One of four species of lynx (with the bobcat), it is typical in having tufted ears, a short bob-tail, and long cheek hair making it look like it has big sideburns. This is the largest species, adult males reaching an overall length of 130 cm/51", a shoulder height of 75 cm/30" and a mass/weight of 38 kg/84 lbs. It has enormous feet; the toes are webbed and also covered in thick fur. This gives a snow-shoe effect, so it can walk across soft powder snow; it also swims well. These lynxes, as you might guess, occur in Europe and northern Asia. The species inhabits rough countryside, usually forested, that gives it enough seclusion. It can tolerate very cold winters, alternating between a short, sleek summer coat, and a thick, dense, long winter coat. It is absent from very hot climates, occurring no further south than the Himalaya Mountains. Sadly, it has been exterminated from many regions, but conservation is helping it make a comeback.

This lynx, like others, is renowned for its strength. While it catches and eats plenty of small animals, like rodents, rabbits and hares, birds, fish and sometimes even insects, it is the species that most regularly takes large prey. Especially in winter, these lynxes go after animals like chamois, wild boar, deer and even young moose – they're recorded as killing deer of at least 150 kg in bodyweight. A large prey animal will be consumed over many days, the carcass being hidden beneath snow, branches or grass in between. Roe deer seem to be their favourite. Depending on the richness in prey animals of their habitat, their ranges can range from about 20 square km/8 square miles, to over 200 square km/80 square miles. Lynxes can track prey over long distances, stalking and creeping up when getting close, but also ambush prey by hiding in a tree or shrubs until it is within striking distance. They have a keen sense of smell and exceptional sight – ancient lore claimed that a lynx can see through a stone wall! The typical method of killing is a bite to the neck or base of skull, severing the spinal cord and causing rapid death. Sometime lynxes eat carrion or take over prey killed by other predators like foxes, owls and eagles, while in turn they can be driven from their prey by wolves, wolverines, leopards, tigers and bears. Wolves, and perhaps wolverines, sometimes kill and eat adult lynxes.

Like many other cats, lynxes make lots of noise when they make love, growling, yowling and meowing. The mating season is in the winter to spring, but over this period, the actual time of oestrus of the female lasts only four to seven days. After mating, the male doesn't involve himself any more in the raising of the kittens. One to four of these are born in a nicely furnished den, fully furred but blind, and grow rather slowly. Their eyes open in ten to twelve days; they start eating solid food at six to seven weeks; they wean at five to six months; nevertheless, their claws are fairly soft, and they retain their milk teeth, as late as the age of eight months. They typically remain with their mother until they're about ten months old. That coincides with the onset of the next breeding season, when she will be preparing to have a new litter.


For a wildcat, the Eurasian Lynx is still fairly numerous. In Europe there's estimated to be about 10 000; in Russia, perhaps over 20 000, and similar numbers in Asia. Even where they occur, they're rarely seen or encountered by humans, being very secretive and stealthy. They've been eradicated from much of Europe, being seen as a threat to livestock, and also being hunted for their fine fur. Currently they're largely protected by law. There are plans for re-introducing them to Britain; they've been re-introduced to Germany and Switzerland, and have from there been re-colonising Italy, Austria, Belgium and France. These hardy kittehs are well able to make a big comeback. A lynx left alone can live to the age of twenty years.