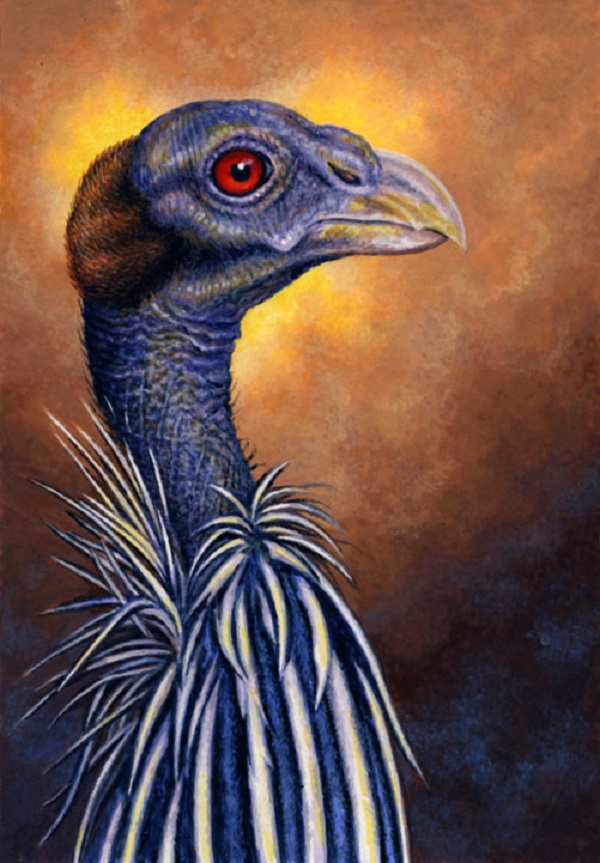 For the moment, we come to our final guineafowl species. This is the Vulturine Guineafowl, Acryllium vulturinum. It gets its name from its vulture-like naked head and neck. The nakedness is relieved by a patch of short, chestnut bristles on the back of its head. It has large, bright red eyes. It has the most beautiful body plumage of any guineafowl. It has very long feathers or hackles on its neck, white edged in black, that droop down over its bright cobalt-blue chest and upper back. The rest of the body is black spotted in white. On the wings the spots join into lilac streaks outlining the feathers. The tail is much longer than in other guineafowl, and pointed. Vulturine guineafowl are larger than the other species, reaching an overall length of 72 cm/28.5". They have comparatively long legs and walk 'tall' compared to the others.


Next to the helmeted guineafowl, this is the one most likely to be seen in captivity outside of Africa. It, too, is a denizen of open habitats. Its distribution is centred on the 'Horn of Africa', including eastern Ethiopia, much of Somalia, almost all of Kenya, and a patch in the northeast of Tanzania. This region is drier than most of sub-Saharan Africa, and covered in open, grassy savannah or scrubby woodland. Like other guineafowl, vulturines are social birds, living in flocks of up to 25 individuals. They are reluctant to fly, preferring to run from danger and to flee into cover like thorny thickets. Still, they can fly if pressed. Their way of life is indeed quite similar to that of the other two guineafowl species I've already discussed here. Their call is a kind of metallic-sounding clucking. The species is not considered to be endangered at present. 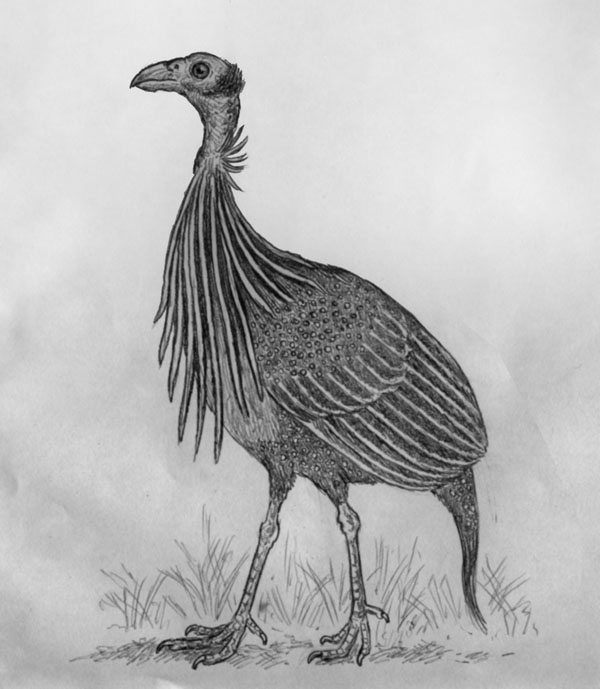 The other species of guineafowl are rare and secretive forest-dwellers. I haven't yet found photos or illustrations of them online, good enough to work from for my own depictions. Of those, the White-breasted Guineafowl, Agelastes meleagrides, is most closely related to the vulturine. It has an entirely bare, reddish-pink head, without crests, helmets or wattles. It has a large white collar stretching around its neck and onto its upper breast; the rest of its plumage is black without any spots. It is very rare, restricted to forest patches in West Africa. The similarly rare but somewhat more widely distributed Black Guineafowl, Agelastes niger, is similar, lacking the white collar, and with some black tufts on its bare, red head. It haunts jungle in Central Africa. The Plumed Guineafowl, Guttera plumifera, also a central African rainforest bird, is similar to the Crested Guineafowl, but much more poorly known, and with a crest of erect rather than curly feathers.


That wraps it up for the guineafowl family, a group of African birds small in number of species, but with great ecological significance and much interest for bird lovers.