Community Voices: No Facts Are Useless 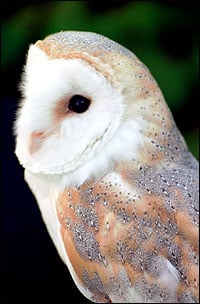 Recently, the community proved that no facts are utterly useless. At least, when they inspire stories.

Dmitri: In the recent Zimbabwe elections, it was illegal for parties to use an owl on their logos. Or a secretary bird.

I waited for them to ask me why. I waited in vain.

Florida Sailor: I have heard a story that when Walt Disney got his first BB gun he shot and killed an owl. He felt so bad about it that for the rest of his life he portrayed them as wise and kind.

In American Native culture they are considered harbingers of fate, not evil or causing anything bad, but they believe that they can warn of death, or other misfortune.

I love watching owls, and bats too! Then again I may just be a bit weird..

ITIWBS: Its quite uncanny getting swooped from behind by one of our local desert owls when out walking at night, so utterly silent one doesn't know it's there until it comes into view.

Dmitri: The owls must hide really well around here, never run into one. They are beautiful things, aren't they?

Baron Grim came back with an illusion-shattering Not when they're young.

Dmitri: Those are rare babies! I'm sure their Mom thinks they're beautiful.

Florida Sailor: A long time ago I had a good friend who was in the Army. He was home on leave and he ordered a brand new Ford F-150 pick-up truck to drive to his new assignment in Alaska. As it happened, it arrived just one day before he had to leave. He wanted to show it off and invited me to go for a ride with him. There is a large island which is a county park, but at the time it was closed to the public. They put 4 foot tall (a bit over a metre) hills of dirt over all the entrances. While they were a barrier to most people, for two kids in their early 20's, in a brand new 4x4 wheel drive pick-up truck, they were only a challenge.


It was already dark when we crossed the barrier and started to cruise the many roads behind. We passed one tree with an owl sitting on a limb at eye level. he was close enough I could have reached out and touched him (but of course I did not try).


We drove around the island for several hours and we passed that tree at least a half-dozen times. Each time the owl swiveled his head watching us (as owls do) He was still sitting there just before we left.


He decided to head north that very night and wrote a note to his sleeping mother to say goodbye. On a whim I wrote a note to my own parents telling them I would be home in a day or so and rode with him as far as Atlanta Airport where I could get a flight home. Just to date myself and this story - Jimmy Carter and his family were filming a campaign commercial at the entrance of the airport as part of his first run for the White House.

And yes, Mgt, we know that thread isn't in the form of a question. But it's of venerable age. And we get all these cool stories….