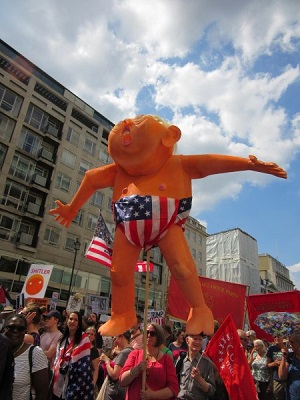 Donald Trump avoided London. He was well advised to do so, as a demonstration had been organised to protest against his presence in Britain. We went to join the Green Party group. It was a hot day in July, so we wore light clothes and carried a bottle of water, as well as a camera and the flag of the European Union (blue with yellow stars). As soon as we left the train at St Pancras, we started seeing people with banners, while others asked us where we were going and offered to take part. It took a long time to join the main march in Portland Place and start moving south.

The crowd represented many groups, from Friends of the Earth and the Greens, through the GMB Union and Unison, to feminist and LGBT groups and people protesting about Palestine. There were banners everywhere. Some of the slogans were predictable, like 'Dump Trump' and 'Trump off' but others were more imaginative. I liked 'Make the Earth great (and green) again' and 'Respect existence or expect resistance.' Many were rude, but others intellectual, like 'For evil to triumph, it is only necessary for good women to keep silent.'

As we walked, a drumming group struck up a rhythm. It was led by a black man with a whistle and included an Asian girl in a hijab. This crowd was multi-racial and included people of all ages. One woman had two little girls with her, the smaller of whom seemed determined to keep walking. People clapped and roared approval of things going on further forward. A brass band provided tunes to which the marchers responded with waves of song.

We moved into Regent Street, where lines of bright art works were strung high above the road, providing additional colour. Someone was carrying a big model of Trump as a baby, complete with nappy and bright orange hair. Elsewhere, there were two people, with realistic paper masks, posing as Teresa May and Donald Trump. As the actors moved forward, the marchers around them yelled 'Teresa May heresy. Donald Trump stay away.'

There were policemen and women standing on the pavement all along the route and, in one side street, I saw a line of riot-proof vans. They didn't seem to be needed. However, as we approached Trafalgar Square, two roads were cordoned off, with policemen on horseback behind the tape. The square was overflowing. A couple of people were dishing out spoonfuls of yellow dal from a trailer. Speeches boomed out from sound systems and a balloon depicting Trump as a baby hovered over the crowd. That was the end of the march.

London copes well with demonstrations. Events like this fizz with noise, colour and political passion but the city remains mainly orderly and peaceful. London has survived invasion, plague, fire and bombing. It is certain to outlast Donald Trump.