Writing Right with Dmitri: You Can't Please Everybody

Sometimes we feel too much responsibility when we write. We think it's our job to solve all the world's problems at one fell swoop, as it were. Between the forces of political correctness, the opinion police, and the overwrought readers with OCD and too much time on their hands, we may feel burdened to dot every i and cross every t. Sometimes, we just need to relax and lean into our narrative.

Edward Ball1, author of Slaves in the Family (amazing book), gave a talk to the San Diego Historical Society. He read aloud some letters from readers that will have you in stitches. One person was exercised about Ball's erroneous treatment of the viola da gamba in his work on the history of slavery in the US. We are familiar with this form of 'reading' from our years on h2g2, are we not? People tend to read to reinforce their own opinions, and to enjoy discussions of familiar topics.

I've been discussing the 1972-1975 television series Kung Fu with my friend Prof Animal Chaos. The Prof said he really enjoyed the series, but took issue with zen philosophy in general:

What is better to have, Grasshopper ? A handful of yen or a handful of rice ?

Why! Master, forsaking all worthy goods, a handful of rice.

Stupid Grasshopper! with handful of yen, you can buy a whole bloody rice field!

It's hard to argue with the Prof's logic, so I don't try.

Trying to cross all our t's, etc, and make all our critics happy can be burdensome. It reminds me of what people have been saying about the current state of public discourse, particularly when it comes to social media as an agenda-setter. If we spend all our time allowing the loudmouths to set the agenda by thinking that we have to answer them, we don't have time to talk about what we want to talk about. Think about it: while we're worrying about who exactly set fire to the White House in 1814, whether it was polite of the US president to bring it up in a trade discussion with the Canadian prime minister, and so forth, there are wars and rumours of wars around the planet, the climate keeps worsening, species become extinct, and children are abused, neglected, and starving everywhere. How can we let these people do all the talking? If they don't want to talk about what we want to talk about, we should stop listening to them as much as we can. We also need to talk about something else.

Oddly, that brings me back to Kung Fu, which I continue to binge-watch in my spare time. At the end of season 2 there is a two-part episode that puzzled me totally – at first. The plots – one in the Old West, one in imperial China – were beyond ridiculous. On the one hand, our hero, Kwai Chang Caine, was inveigled by a mad mountain man into helping drive a stolen armoured stagecoach carrying gold and a mysterious, but very heavy box. In the course of the proceedings, a band of Sioux warriors acquired a Gatling gun, and the cavalry was in serious trouble. The Sioux leader was named Lame Dog. In the China flashback, Caine was madly in love with a courtesan played by Nancy Kwan, who inveigled him into a ludicrous battle with the most incompetent bandit of all time. Had the scriptwriters lost their minds? Was what I thought. Had they spent two years painstakingly building a credible storyline with which to share their views of Life, the Universe, and Everything, only to betray it with a parody that would have disgraced the nuttier episodes of The X-Files2?

As it turned out, the ending of this Kung Fu romp proved that the writers, directors, and actors had remained true to their brief. They were making a zen point, and zen is often humorous and deeply profound at the same time.

before heaven and earth.

silence and the void,

Ever present and in motion.

Perhaps it is the mother of ten thousand things.

I do not know its name.

I call it Tao.

For lack of a better word, I call it great.'

For lack of a better name, we call her Anna.3

That two-part episode had us rolling on the floor: at the end, it had me gasping in delight at the insight. Now, you can't get there if you try to please everybody else. You've got to be looking for your own truth, whatever it is. You may succeed in finding that truth, or you may fail. But you're not going to get there by using somebody else's map. Or by taking them, or yourself, too seriously. You've got to let go and cast your arrows at a venture sometimes.

I'll leave you with this story. It's by Aesop. In other words, this is not a new issue. See what you think. 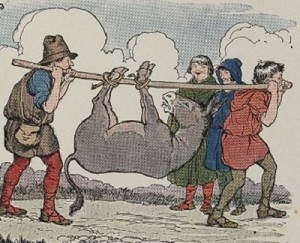 One day, a long time ago, an old Miller and his Son were on their way to market with an Ass which they hoped to sell. They drove him very slowly, for they thought they would have a better chance to sell him if they kept him in good condition. As they walked along the highway some travelers laughed loudly at them.


"What foolishness," cried one, "to walk when they might as well ride. The most stupid of the three is not the one you would expect it to be."


The Miller did not like to be laughed at, so he told his son to climb up and ride.


They had gone a little farther along the road, when three merchants passed by.


"Oho, what have we here?" they cried. "Respect old age, young man! Get down, and let the old man ride."


Though the Miller was not tired, he made the boy get down and climbed up himself to ride, just to please the Merchants.


At the next turnstile they overtook some women carrying market baskets loaded with vegetables and other things to sell.


"Look at the old fool," exclaimed one of them. "Perched on the Ass, while that poor boy has to walk."


The Miller felt a bit vexed, but to be agreeable he told the Boy to climb up behind him.


They had no sooner started out again than a loud shout went up from another company of people on the road.


"What a crime," cried one, "to load up a poor dumb beast like that! They look more able to carry the poor creature, than he to carry them."


"They must be on their way to sell the poor thing's hide," said another.


The Miller and his Son quickly scrambled down, and a short time later, the market place was thrown into an uproar as the two came along carrying the Donkey slung from a pole. A great crowd of people ran out to get a closer look at the strange sight.

The Ass did not dislike being carried, but so many people came up to point at him and laugh and shout, that he began to kick and bray, and then, just as they were crossing a bridge, the ropes that held him gave way, and down he tumbled into the river.

The poor Miller now set out sadly for home. By trying to please everybody, he had pleased nobody, and lost his Ass besides.
If you try to please all, you please none.

1This is not the Ed Ball of the UK Parliament. He did not set off a furor by trying to 'google' himself on Twitter. The Editor has no information as to whether the two are related.2The one with the metal insects from outer space springs to mind. Anything written by Darin Morgan. He'd breeze in periodically and throw the whole show into a tizzy.3For lack of a better word, Hitchcock called it 'Macguffin'.