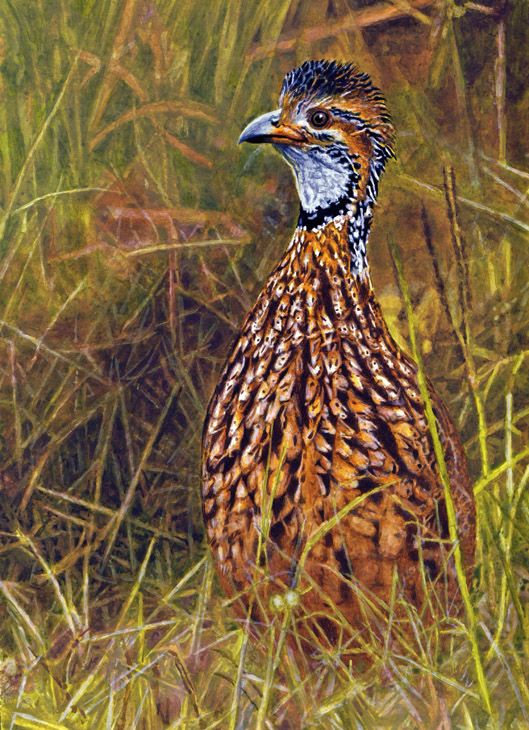 This species, the Orange River Partridge, Scleroptilus levaillantoides, only occurs in dry, open, grassy regions in Southern Africa. It is characteristic of the Kalahari Desert, which is actually a vast, dry savannah, but is absent from the Namib, a true desert, and from the semi-desert Karoo. Like other African partridges, it is sometimes called a Francolin. It is also related to another group of partridge-like birds, the Spurfowl – which are also sometimes called francolins, and all having been put into the genus Francolinus. Recent studies have separated these birds into a few different genera. They can be very difficult to separate from each other just by visual inspection – although a few species stand out.


But the Orange River partridge is not one of the stand-outs. It looks very much like the Shelley's, Grey-winged and Red-winged partridges. Given a very good view, you can indeed separate it on the strength of certain subtle features of the patterning around the face and breast. But your best clues are distribution, habitat, and voice. The other, similar partridges occur more to the south and east than the Orange River partridge, and in lusher grassland and savannah. But most of all you can ID them by their voice. Every partridge has a unique call, and they are very noisy – if they're there, you'll hear them. It's not really possible to put these calls into words, but these days, there are apps you can use on your cellphone to play bird calls to you while in the field, to confirm their identity.


Chickens of the Kalahari

Orange River Partridges are about the size of bantam chickens, reaching an overall length of 34 cm/13.4". Males differ from females in having spurs. Living in such dry areas, they are able to go without drinking water for long periods. They get pretty much all the water they need from bulbs, tubers and corms they dig out of the sandy soil. They particularly depend on the corms of Cyperus sedges and Moraea, a genus of beautiful wild irises. They also eat lots of termites, ants, beetles and larvae of butterflies and moths. They'll peck up seeds of grasses and weeds from the ground. They forage very much like chickens, pecking and scraping methodically as they move. Aside from the wild country, they have to a degree adapted to man-made habitats, entering farm fields where they will do some good by eating pest insects, but also will eat a bit of the crops themselves.


Like most other African partridges, they have a complex social structure. The basic unit is a covey, which can be an extended family group or 'clan', or a bachelors' covey of cocks who haven't yet found mates. The covey holds a large territory, with a communal roost where they spend the night and from which they set out on their daily foraging trips.


Within the covey, males pair up with females and likely remain mated for life. The breeding season coincides with the summer rainfall, with two peaks, first in early spring, next in mid-summer at the time of heaviest rains. Unfortunately we don't know much about their courtship behaviour, but it likely involves calling and posturing, including spreading of the wings and crest. The nest hollow is scraped out below a grass tuft, and lined with fine grass leaves. The hen lays a clutch of five to eight eggs. She will sit tight on her nest, trusting the camouflage of her feathers to conceal her. The chicks are born open-eyed and able to walk, with a stripey pattern on their soft, downy bodies. They follow the parents and rapidly learn what to eat, where and how to find it. Sadly, the chicks suffer a high mortality rate, thanks to numerous predators and their lack of defenses and hiding places in the open grassland. Francolin chicks very rapidly learn to fly, some mastering it at the age of only ten days. Often while exploring the grasslands and savannahs you'll surprise a family, which will noisily and startlingly fly out and away, and you'll see the parents followed by the little chicks. They'll only fly as a last resort, preferring to lie flat and trust in their concealment. Sometimes they'll scatter into different directions, the chicks using their soft calls to find each other and their mother again afterwards.

At present, these partridges are not endangered, occurring over a very large range even if at fairly low densities. They could be at risk if climate change causes their dry haunts to become even drier.