Freewayriding writes: 'My boy passed the first part of his driving test this week, thought I'd blow the cobwebs off this tale…' 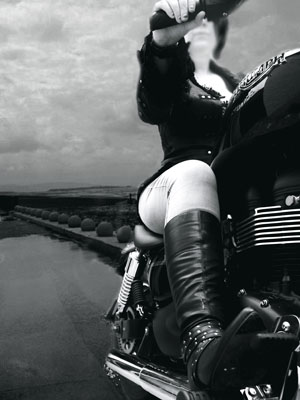 Hidden between the once great industrial towns and cities of northern England is some truly beautiful countryside. Through that countryside flow various A and B roads, really nice roads that bikers love to have a bimble on every now and again. Most are National Speed Limit restricted (60mph on a single lane, 70 mph on a dual carriageway) and are a joy to ride. Many of these roads, being close to towns, now form part of the motorcycle test routes.

One such road boasts a rather sharp left-hand bend; on the approach to the bend there is nothing but flat farmers' fields, broken by the odd hedgerow and a few cows.

Oh, and two very large dead trees that sometime in the past have succumbed to gravity and old age and have fallen across each other, holding together for fear of falling like two drunks leaving the village pub on a Friday night.

A monolithic X marking the spot: perhaps some Pagan monument to Simon Cowell? What's this got to do with motorbikes I hear (ok I imagine you may be asking yourself if by some strange quirk of fate you've ended up reading this journal and are not on a couch somewhere, stuffed with turkey and pumpkin pie watching a 'football' game. Yes I believe today is Thanksgiving across the pond) you say?

Well, bikes are dim-witted creatures, they will go exactly where you tell them to go, no thoughts of 'oh, that'll hurt if I crash headlong into that phone box,' no survival instinct will kick in if it's racing towards a cliff, you get the idea, motorbikes will go exactly where the rider is looking, a simple turn of the head and the bike follows like an obedient but rather stupid puppy.

Now back to the bend and the X factor trees.

A trip out in the van and the said Honda 500 is rescued from the cabbage field. Rob explains he set up for the bend then noticed the trees had made a pretty striking X shape...a short plunge through the hedge and he and the bike ended up eating cabbage. Lesson learnt: test failed. Don't look at the trees!

Second test day approaches and we really hammer the country roads, me on the radio mike chanting in his ear, 'Don't look at the trees, Rob, look through the bend'. No problem.

Test day take two, 'Oh look a big X!. Crash, test three; 'Don't look at the trees, don't look at the trees, Oh a big X again!' Crash! And number four goes the same way, poor Rob has well and truly become fixated with the bloody things. The bill for smashed bits of Honda was growing steadily too, 'Luckily' he was never hurt whilst diving for cabbages.

Fifth time lucky, Rob asks the examiner can I accompany him on the test route for moral support. No problem, so I tag along at the rear, heart in my mouth as we approach X bend.... miracle of miracles, sometime in the last couple of days the landowners have obviously declared the trees unsafe for cows or something and have finally chopped them down, great news for Rob!

Well, it would've been if the prat hadn't got to the bend and looked across the field...

1Editor's Note: No, never. We pig out on pumpkin pie, though, and those big orange things are a much worse distraction in a field.