A gem from the Journal archives.

D is for the Dieppe-Newhaven Ferry 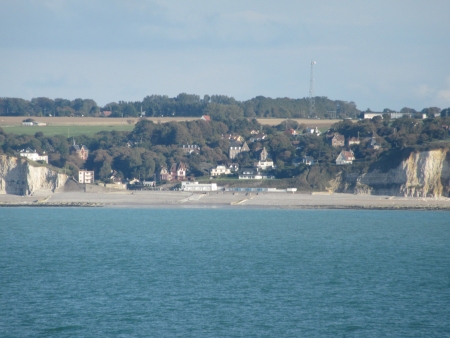 At the end of our trips to France, we return through Dieppe and catch the ferry to Newhaven. We usually have time to spare as we approach Dieppe, so we stop at one of a number of places. There is Longueville-sur-Scie, where a ruined castle, dating back to William the Conqueror's time, stands on a hill.Sometimes we stop in Braquemont, just to the east of Dieppe and walk a path on the cliffs, and other times, we go to Varangeville, where we can walk along the beach, looking in rock pools. The cliffs here are mainly chalk, as on the other side of the Channel, though they are stained here and there with brown.

The Dieppe-Newhaven ferry looks like a big wasp sitting in Dieppe harbour, because it is bright yellow with black lettering. It struggles to make money, because it competes with the Tunnel, and the ferries through Dover. Maybe because of this, it looks suspiciously rusty in places. They load it with lorries, caravans and campervans, cars, motorbikes and a few brave cyclists. We stand on deck and watch as the harbour workers cast off and the ship moves out to sea. Dieppe looks like a pleasant town, with a wide beach and green lawns . Once, we saw a kite festival, which filled the sky with kites of every size, shape and colour. For a while, we watch the line of cliffs dwindle into mist.

We look out for gannets flying past, with their heavy bills and black tipped wings. Sometimes we see them dive, arrow-like into the water. There have been times when the sea has been so calm the ship leaves a wake that looks like lace on blue-grey silk. There have been other times when the wind has been so strong that, if we venture out on deck, we can hardly stand up, and the Captain decides that the passengers should stay indoors.

The ferry has a cafeteria and we usually wander along, once the ship is under way. We don't eat meat, so we regard the pans of congealing sausages with distatse, and buy fish and chips. It tends to be greasy but fish and chips on the Dieppe-Newhaven ferry has become one of our traditions.

It's usually dark when we reach Newhaven, but we sometimes venture out on deck, to spot the long, cloudlike shape of the Severn Sisters cliffs. As the ship docks in Newhaven harbour, it passes a huge pile of rusty scrap metal on the quay, with a couple of cranes moving grabfuls around. It's hardly an advertisement for beautiful Sussex. It often takes a long time to unload and we watch as the big lorries manoeuvre, and the ramps to the car decks are lowered with a clang. We know, once we leave the ship we're nearly home.