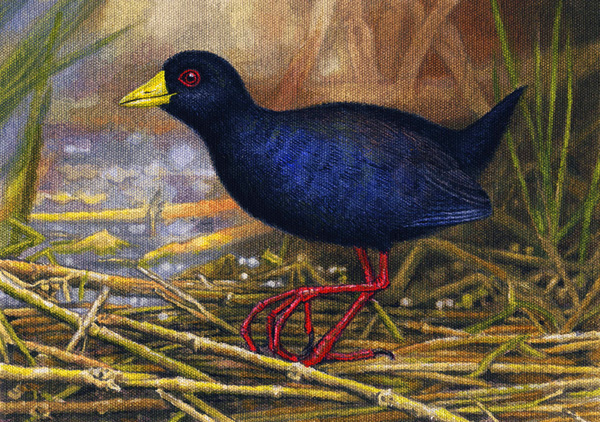 Allow me to introduce you to this Black Crake, Amaurornis flavirostris. This little bird is one of the commonest members of the Rail Family, the Rallidae, in South Africa. It is definitely one of the boldest. Other rails and crakes are extremely secretive, skulking about dense reeds and other vegetation and showing nary a glimpse of themselves. It is as if they have a super sense telling them that humans are near, in which case they high-tail it for the nearest hidey hole. Indeed, for crake or rail encounters, most birdwatchers are satisfied enough if they can hear them calling.


Not so the black crake! True enough, its call is often the first sign of them being in a certain area. This call is very distinctive, and also very unusual for any bird. It consists of harsh, low, grunting, wheezing or croaking sounds, mixed in with rapid, high-pitched chattering. In spite of its unmusicality, this is actually a duet of sorts between a mated male and female. If you hear these sounds around a reed bed, find yourself a vantage point where you can look at gaps between patches of reeds, and wait. Black crakes are very active and running and clambering about the reeds, rushes and other plants of the marshes, swamps and lakesides. Unlike the other rails and crakes, they don't worry so much about coming out into the open. They sometimes feed in quite exposed positions at or near the water's edge. And if one does show itself, it is quite a pretty little thing. The velvety black of its body is relieved by bright red legs and eyes, and a greenish-yellow bill. Its extraordinarily long legs and toes help it to climb over reed stems or tangled roots, or to support itself on floating water plants. Like other members of the family, they're constantly flicking their tails up and down as they move, which makes them look alert to predators, and also functions as a visual signal to other crakes. They often occur in small groups, so if you glimpse one, you're likely to see others.


Their success has much to do with their versatility. Black crakes are omnivorous. They eat animals such as small aquatic invertebrates, fish or tadpoles. They are sometimes naughty and eat the eggs of other wetland birds. They also avail themselves of plant food, such as the tender new sprouts of aquatic plants, as well as flowers, fruits, and the seeds of rushes, sedges and waterside grasses. They've even been noted as eating ticks and insects off the skins of hippos and warthogs! They're good at catching these (the insects, that is, not the warthogs or the hippos), being alert, sharp-sighted and very fast, darting forward with their strong legs and quickly grabbing with their stout bills.


Because of the mild climate over most of South Africa, so long as there's water in a wetland, there will be growing plants and insects and other critters feeding on them. Thus the black crake, which feeds on all of them, can breed any time of the year. A couple make their nest in a tangle of reeds, rushes or sedges, high enough so it keeps dry. The nest is made of strips of reed or grasses, in the shape of a neat bowl. In this the female lays two to six eggs. The newly-hatched crake chick is covered with black down, and leaves the nest to join its parents soon after hatching. It has a striking pink bill, with a ring around the middle. As it grows, its bill turns all-black, and then dark green, finally lightening to yellow-green as the chick reaches sexual maturity. In good years, black crakes can raise more than one brood a year. Older chicks even hang around and help their parents raise new ones!


Black crakes are extremely widespread, occurring in all of sub-Saharan Africa except waterless deserts. They're common wherever they occur. They make use of even small ponds, so long as there's some marginal vegetation, and have certainly benefited from all the man-made dams and impoundments all over South Africa (not to mention other African countries). If any particular pond, stream or marsh dries up, they'll fly off in search of new feeding and breeding grounds. Though being Africa's most distinctive and abundant crake species, they're part of a mainly Asian group of crakes constituting the genus Amaurornis, and a very similar relative of theirs occurs on the island of Madagascar.