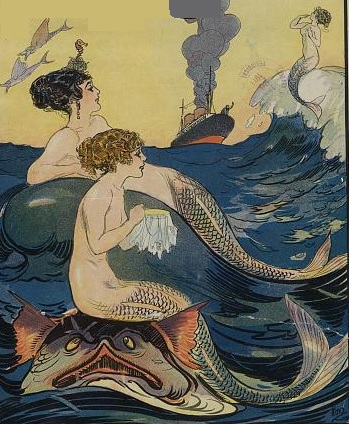 Owen walked along the beach in the direction of the rocks. He liked this beach, with its curve of golden sand and the dark rocks at the end. They looked as if they could have been tossed by some water god, as they lay tumbled in a careless heap. He meant to scramble up them and look in the rock pools, as he kept a log of the sea anemones, crabs and other forms of marine life he saw. As he walked along the sand, he found plastic bottles, tin cans and rope, mixed with other refuse and seaweed. He shook his head at the carelessness of people, and collected the rubbish in a bin bag. He would dispose of it later.

As he approached the rocks this morning, he heard a beautiful sound. It resembled a woman singing, but her voice interwove with the music of waves on the beach and wind over the surf. At once he knew he had to find that music. He clambered up the rocks and thought he saw a woman, out where the waves crashed. As he climbed closer, he realised he was looking at a mermaid.

Owen stopped and stared. He’d never seen anything as beautiful. Her hair was the colour of sand in sunlight, her skin as creamy as the surf and her tail flashed as silver as herrings in water. He was drawn to her with a force he could not resist. He was about to jump to the rock where she sat when she held up her hand.

"Owen, do not come any closer or you will fall. I do not want to hurt you. I want you to listen to my song, then return to your people and tell them."

She started singing again, a mournful song. It told of plastic being discarded by humans and sinking into the ocean to be swallowed by turtles and fish. Coral reefs were dying as the temperature of the sea rose, and sea creatures’ shells were growing thinner as water became more acid. As the ice receded, fish which needed cold water swam ever closer to the poles. Sea birds returned to their chicks with little food and communities which depended on fishing were dying.
By the time the mermaid finished singing, Owen was in tears. "What can I do?"

"Go, tell everyone you can what is happening to the sea, from the children in school to the most powerful people in the world."

"If you do as I say for seven years and seven days, then return here, I will be yours." With a quick flip of her tail and a splash of water, she had gone.

Owen turned away, his mind full of what he’d seen and heard. He walked back along the beach and, by the time he’d reached the road, he’d made a plan. Over the next few weeks, he started to carry it out. He gave up his job with an insurance company and got one working for a wildlife charity. He wrote articles and gave lectures, he travelled widely and talked to everyone he met. After a while, he became well known. Universities and companies sought his advice; he met presidents and queens, but he still went to schools and talked to pupils. He was tireless and determined.

After seven years and seven days, Owen returned to the beach. He walked along the sand but, this time, he didn’t carry a bin bag, as he knew the time for that was over. All he wanted was to see the mermaid, tell her he had done what she asked, and to be with her. He didn’t know if that meant he would drown, or she would leave the sea, but he didn’t care. The mermaid and her message had so taken over his life, nothing else mattered.

As he approached the rocks, he heard the song again. It rose and soared around him, singing of the sea and all its creatures, bringing him joy and sadness intertwined. He climbed the rocks, aware he wasn’t as nimble as he had been. He had aged in seven years. At last he saw her, perched on the same rock as before, and she was beautiful as ever. He stood spellbound.
She smiled and held out her hand. "Come, Owen. This time, you will not fall."

Owen leapt from the rock and felt her arms closing around him. She held him close and together they sank beneath the waves.