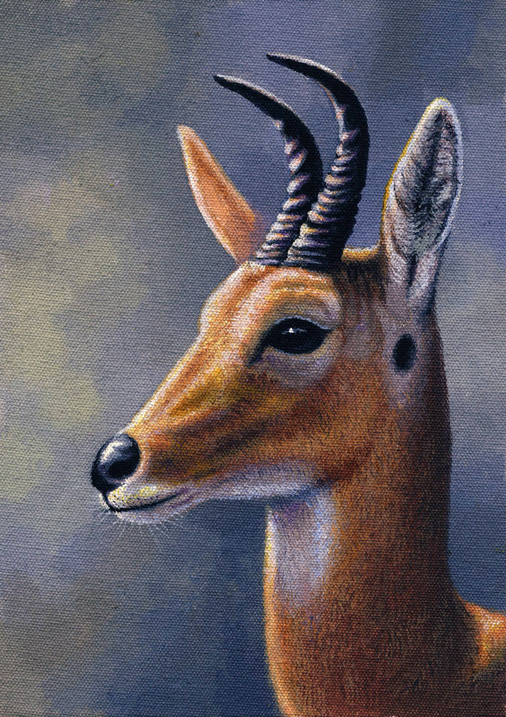 Last week we looked at the Reedbuck; this week we look at the closely related Mountain Reedbuck, Redunca fulvorufula. As you can see, they are both in the same genus. In practice, they're fairly easy to distinguish. Visually, they're smaller and more compact than reedbucks, with a fleecy, more greyish-red coat. Males have horns that are much shorter and more sharply forward-curved than those of the reedbuck ram. They also always have a prominent, black, glandular patch below the base of their ears. Rams reach 80 cm/32" in shoulder height and 38 kg/85 lbs in weight; ewes are slightly smaller. Despite their name, mountain reedbucks don't associate with reeds at all. They do live around mountainous and hilly regions, usually with rocks, scrub and grass. They occur in three widely separated regions: Southern Africa, north-east Africa, and the highlands of the Cameroon. They prefer fairly dry and open uplands, not rain-soaked mountain forest or moorland, and they don't go all the way up to the highest peaks, avoiding very steep slopes. It is highly likely that their current range is a small remnant of a much larger range when much more of Africa was covered in cool, dry, grassland with scattered shrubs and trees. During such a period their range would have been continuous, but when the climate changed, it contracted and broke up into the present configuration.


The Antelope that Aids Pronunciation


The High and Dry Life

Mountain reedbucks occupy the driest habitats of the reedbuck-waterbuck group of antelopes. They get more of their water from the moisture content of the grass they eat, but their health deteriorates if they don't drink at least occasionally. But they don't like getting wet; they'll tolerate light rain but when there are heavy showers, they turn themselves so that their butts face the direction of the rain, lowering their heads and looking rather miserable. If possible, they will seek the shelter of trees, bushes or overhanging rocks. Though they sometimes come together in flocks of up to 30 animals, they usually live in smaller groups, of up to 8. Ewes and their lambs and older offspring usually occur together, and inhabit larger ranges than those of the rams, which usually occur singly. So, a group of females typically range over the territories of more than one ram, who rarely interfere with their movements. Ranges typically include various kinds of environment, from the tops of hills and mountains down to the bordering valleys. Mountain reedbucks are more day-active than the other reedbucks, feeding in the morning and evening, and resting huddled together concealed by low bushes during the hottest part of the day. They also do a bit of night-time snacking.


Mountain reedbucks share much of their range and habitat with the Grey Rhebuck which despite its name (especially similar in Afrikaans, 'vaalribbok') is not a close relative. There are sometimes fights between the two species, and often the smaller but more aggressive grey rhebuck ends up killing the mountain reedbuck. Mountain reedbuck rams also fight among themselves. Because of their small territories, they sometimes suffer from insufficient food. When a patch of grassland inhabited by a mountain reedbuck ram burns down, it would be forced to invade neighbouring territories to survive; much fighting might also result. But sometimes numerous rams join together into non-territorial bachelor herds. Overall, male mountain reedbucks suffer high mortality, so that there are more adult ewes than rams.


Like the reedbuck, the mountain reedbuck communicates through a loud whistle, typically as an alarm call. This will cause the entire herd to run off, with the same rocking-horse kind of gait and occasional stiff-legged leaps as in the reedbuck. They raise their tails to make the fluffy white underside prominently visible. This posturing is to make their alertness evident to any prospective predator. They will flee obliquely down the mountain slope to gain the advantage of speed. If you ever startle a herd of mountain reedbucks, try giving a loud whistle – this might stop them in their tracks to look at you with puzzlement! They also communicate through scent, marking their territories with secretions from the glands under their ears.


Reproductively they're similar to reedbucks. A single lamb can be born anytime of the year, but more often in spring or summer. The lamb initially hides itself; its mother comes to suckle and clean it one or two times a day; afterwards the lamb moves off to a different hiding place. The mother will consume its faeces and urine to minimize scents that a predator might detect. If the lamb senses danger it will call loudly and its mother will run to its defense. The lambs join the herds at the age of one or two months; they retain the bond with their mother until she delivers her next lamb. If she loses the lamb, the older offspring will bond with her again. Young rams are chased out of the group at between nine and fifteen months of age, at which point they'll try to join a bachelor herd.


At present, mountain reedbucks are fairly common in rough countryside lacking many human inhabitants, and are overall not endangered, but this doesn't mean we should be complacent about them. They do need some protection and proper environmental management to thrive. Their sedentary nature makes it difficult for them to re-colonize areas they've disappeared from, but this only means they can benefit greatly by human-aided re-introduction programs.