We couldn't stand it. You just have to read this ninja review of an 1880 Broadway play penned by the energetic and opinionated Carla Wenckebach. Ms Wenckebach was a German-born scholar who later became a professor at Wellesley College. This review (in translation) comes from the 1908 biography by Margarethe Müller entitled Carla Wenckebach, Pioneer.

If you get the time, read this book. It's an amazing story of travel and strangeness that will tell you more than you ever imagined about life in Europe, the UK, and the US in the second half of the 19th Century. It will also make you laugh a lot. Carla is a sort of noisy Mr Bean. She would have made a wonderful h2g2er. 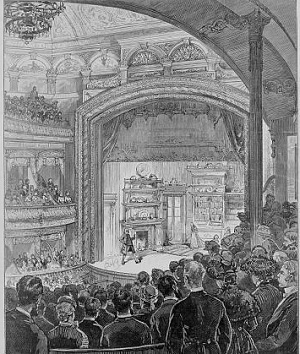 Practically the only unmitigated criticism in which Carla indulges during these first years of her contact with American life is that directed against the apparent lack of appreciation of high art as she witnesses it in the theaters, and that condemning the methods of instruction used in American schools. In elaboration of her views of the American theaters I quote one of her letters:

"Just at present an extraordinarily sensational play is being given in one of the large theaters here. Thousands of people crowd there every night to have their nerves shaken. Of course I have been to see it! Oh, my goodness gracious sakes alive1! I hope never in my life to see anything to equal it! Even the famous spectacular shows of St. Petersburg sink into insignificance before this performance. Let me try to give you an idea of it. The scene of action in one act is a big ocean steamer, a cross-section of which is represented on the stage with wonderful realism. It is night, and the moon shines. A few passengers are still walking on deck, but most of them lie asleep in their cabins. All of a sudden an infernal machine explodes in the hold with such a terrific thunderclap that even I jumped with fright off my cushioned seat in the parquet. Pillars of fire burst out of the steamer, the decks cave in, sheets of flames and clouds of smoke shoot from the cabins. The passengers, starting from their beds, scream wildly for help; little children run to and fro in agonized fear; in frantic confusion people rush upstairs, downstairs, into the flames, overboard. The captain roars out commands, and shoots down several sailors; and all the time the grewsome wails of human voices are half drowned by the clang-bang of a tremendous orchestra. The sounds and confusion reach a last-judgment-day pitch when with a thundering crash the whole upper part of the ship gives way. When the curtain falls on this wild chaos of flames and misery, and the whole theater is filled with powder smoke, the audience bursts into a deafening roar of applause. Everybody is keyed up to the last notch; whoever doesn't feel his nerves then, doesn't have any, and never will have any. . . .

The third act is a wonderful sea picture in which the remnant of the shipwrecked, clinging to a burned spar, are floating about in the dusk on the miraculously natural ocean waves. The three starved creatures divide the last drops of water; one of them dies, the others are about to kill each other, when, lo! the sun rises, revealing a sail on the horizon. It comes nearer, nearer; the unfortunate wretches manage to cry out, to signal – and at last are saved. The end is that one of the rascals who put the explosive in the boat is hanged; the other one falls four stories in an elevator and so gets his deserts. Truly, one can't ask more for one's money!

"The whole performance is doubtless a great triumph of machinery, but isn't it madness to present such a frightful catastrophe on the stage! Probably the overwrought public that has interest only for the never-before-seen [das Niedagewesene] needs such claptrap in order to get the excitement it craves. If you tried to present Goethe's Iphigenie you would have to pay the people to get them even inside the theater2. . . . Time is money. If the American is to be willing to spend any of this precious commodity outside his business, he must be offered something that 'pays,' – not a monotonous classical drama, but a performance which in a way combines theater, concert, and circus."

Editor's Note: Alas, I cannot find the name of this play, which appears to have employed James Cameron on a time-travel trip. If anyone has a clue, let us know. Apparently, modern-day cinema treats come with a long pedigree.

1My guess at a backtranslation is Ach, du meine liebe Güte!2Editor's Note: You would have to pay me to sit through Iphigenie, and I've studied the plays of Goethe.