I picked up this marvelous old book in the antique shop the other day. It's called A Parody Outline of History, by Donald Ogden Stewart (1921). Mr Stewart's idea was to top HG Wells in the history-writing department, and to add some details about US history that Wells, being British, had left out.

The really genius aspect of the whole exercise is that Stewart has written these well-known historical events up in the style of various popular writers of the 1920s. I particularly enjoyed this titbit about the Puritans of old New England, and thought you might like a sampling. One wonders: if the Pilgrims had been anything like the flappers and jelly beans of 1920, would the US have existed at all?

The Courtship of Miles Standish

In the Style of F Scott Fitzgerald 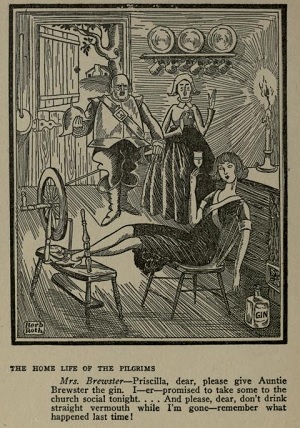 This story occurs under the blue skies and bluer laws of Puritan New England, in the days when religion was still taken seriously by a great many people, and in the town of Plymouth where the "Mayflower", having ploughed its platitudinous way from Holland, had landed its precious cargo of pious Right Thinkers, moral Gentlemen of God, and Priscilla.

Priscilla was ,well, Priscilla had yellow hair. In a later generation, in a 1921 June, if she had toddled by at a country club dance you would have noticed first of all that glorious mass of bobbed corn-colored locks. You would, then, perhaps, have glanced idly at her face, and suddenly said "Oh my gosh!" The next moment you would have clutched the nearest stag and hissed, "Quick yellow hair silver dress oh Judas!" You would then have been introduced, and after dancing nine feet you would have been cut in on by another panting stag. In those nine delirious feet you would have become completely dazed by one of the smoothest lines since the building of the Southern Pacific. You would then have borrowed somebody's flask, gone into the locker room and gotten an edge not a bachelor-dinner edge but just enough to give you the proper amount of confidence. You would have returned to the ballroom, cut in on this twentieth century Priscilla, and taken her and your edge out to a convenient limousine, or the first tee.

It was of some such yellow-haired Priscilla that Homer dreamed when he smote his lyre and chanted, "I sing of arms and the man1"; it was at the sight of such as she that rare Ben Johnson's Dr. Faustus cried, "Was this the face that launched a thousand ships?" In all ages has such beauty enchanted the minds of men, calling forth in one century the Fiesolian terza rima of "Paradise Lost", in another the passionate arias of a dozen Beethoven symphonies. In 1620 the pagan daughter of Helen of Troy and Cleopatra of the Nile happened, by a characteristic jest of the great Ironist, to embark with her aunt on the "Mayflower".

Like all girls of eighteen Priscilla had learned to kiss and be kissed on every possible occasion; in the exotic and not at all uncommon pleasure of "petting" she had acquired infinite wisdom and complete disillusionment. But in all her "petting parties" on the "Mayflower" and in Plymouth she had found no Puritan who held her interest beyond the first kiss, and she had lately reverted in sheer boredom to her boarding school habit of drinking gin in large quantities a habit which was not entirely approved of by her old-fashioned aunt, although Mrs. Brewster was glad to have her niece stay at home in the evenings "instead", as she told Mrs. Bradford, "of running around with those boys, and really, my dear, Priscilla says some of the funniest things when she gets a little er 'boiled', as she calls it, you must come over some evening, and bring the governor."

Mrs. Brewster, Priscilla's aunt, is the ancestor of all New England aunts. She may be seen today walking down Tremont Street, Boston, in her Educator shoes on her way to S. S. Pierce's which she pronounces to rhyme with hearse. The twentieth century Mrs. Brewster wears a highnecked black silk waist with a chatelaine watch pinned over her left breast and a spot of Gordon's codfish (no bones) over her right. When a little girl she was taken to see Longfellow, Lowell, and Ralph Waldo Emerson2; she speaks familiarly of the James boys, but this has no reference to the well-known Missouri outlaws3. She was brought up on blueberry cake, Postum4,
and "The Atlantic Monthly"; she loves the Boston "Transcript", God, and her relatives in Newton Centre. Her idea of a daring joke is the remark Susan Hale made to Edward Everett Hale5 about sending underwear to the heathen. She once asked Donald Ogden Stewart6 to dinner with her niece; she didn't think his story about the lady mind reader who read the man's mind and then slapped his face, was very funny; she never asked him again.

1Yeah, we know. Read on and count the reference jokes.2Famous poets of the 19th Century.3Instead of Frank and Jesse, she's talking about Henry and William.4Brits, it was a horrible drink, somewhat like Bovril.5Another writer.6The author has the nerve to put himself in his own story. We never do that around here, do we?