Tales from the Campfire 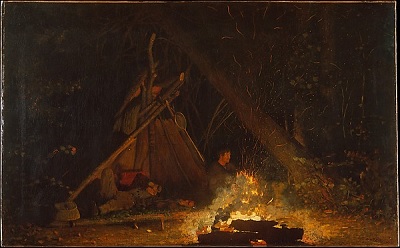 Back in the early 1900s, folklorist Mabel Powers got in a lot of trouble when she was caught telling Iroquois folktales out of season. She didn't know any better. You see, spring, summer, and early fall are for hunting, fishing, planting, gathering, and other useful activities. Telling stories would take away from work time. Besides, they told the kids, if you told fireside tales during working season, the Little People (like leprechauns, only they're Iroquois) would get mad. They might turn you into a rabbit.

An Iroquois elder explained to Mabel Powers that she had to wait to tell the stories until the frost, when the Little People were hibernating and wouldn't hear her. He was kind of relieved that Mabel hadn't been turned into a rabbit yet. She promised to change her story-telling schedule.

The Iroquois and related nations were the first humans who lived in this area. This probably explains why, when the days grow shorter and the air crisps up a bit, we get the urge to tell stories. I'm also suspecting that those Iroquois elders were not above telling the kids a few hair-raising tales, any more than the local Heffelfingers or Hoggetts are today.

No folklorists were present at the following fictitious fireside, but this folklorist can attest to the fact that the stories are real. I didn't say that they were true: I said they were real. There's a difference, please try to keep up.

Overheard Around the Campfire

It was good dark. The leaves were crunchy underfoot, the air was chilly, the stars were bright overhead, and the fire roared and sent up sparks. Time for some storytelling. At least, that's what Justin thought. Justin was 18. He was honing his skills as a teacher, he thought – practicing on his siblings and cousin.

'Hey, guys, gather round the fire. Andy, douse the flames on that marshmallow before you put it in your mouth. Let's tell stories.'

'What?' said Joloy. 'She had an arm made of gold? That doesn't make sense.'

'It's called a prosthetic,' was Andy's helpful comment. Andy was only 11, but he knew lots of science stuff.

'A boy at school has a leg made of plastic,' said cousin Ethan, who was the same age as Andy. 'He said it itched sometimes.'

Andy screwed up his face. 'How did it itch?' Ethan shrugged.

'This is still a dumb story,' decided 14-year-old Joloy. 'I'll bet it was way old when you heard it, even.'

Justin was stung. After all, he'd read the story in a book by Mark Twain in Advanced Placement English. It came with instructions for telling it. 'All right,' he retorted. 'I suppose you guys can tell a better ghost story than that?'

'Of course we can,' said Joloy. 'We'll each tell one. And,' she winked at the others, 'They'll all be real ones from around here!'

'I'll go first,' offered Andy. 'You know the woods over behind the Amish farms? Way back there, there's an old cemetery. It's real little, just a few graves. Well, one of them has a statue on it. It's an angel.'

'Like on Doctor Who?' asked his sister. 'A Weeping Angel?'

Andy nodded. 'Like that. Only the angel isn't weeping. It's pointing. One arm is by the angel's side. The other one is pointing.'

Ethan shook his head. 'If it's pointing to Heaven, it should point up.'

Justin was intrigued in spite of himself. 'Okay, so the angel has its arm raised. What's spooky about that?'

Andy's voice was solemn. 'Because once a year, on the day it says on the tombstone, the angel switches arms. One goes down, the other goes up. Lots of people have seen it.'

'Who?' Justin wanted to know.

Andy shrugged. 'I dunno. Lots of people. Practically everybody in Knox.'

'Well, I think that's spooky enough,' determined Joloy. 'One Weeping Angel with mobility beats your old Golden Arm any night. Okay, it's my turn next.' While the boys skewered more marshmallows, she began.

'This one's about a cemetery, too. You know the one: it's just about two miles down that road over there. . . ' she pointed. 'The cemetery's real old. Some of the tombstones go back to the early 1800s.

'Now, a long time ago, maybe a hundred years ago or more, there was a mean man who lived way back in the woods with his family. He had some serious issues (ignoring Justin's eyeroll), and he didn't like to be around anybody. And one day, he just went crazy.'

Ethan held his breath, and even Justin looked interested. Andy, who'd heard this one before, waited patiently as Joloy continued.

'Like I said, the man went crazy. He killed his whole family with an axe. He even killed his two little babies. When people found him, he was sitting in the cemetery, all covered with blood, and he was just staring, like he didn't know what he'd done. His dead family was all around him. Except for the babies.' Joloy's eyes grew wide. 'The babies were hanging in the trees!'

Ethan jumped, and even Justin shivered a bit.

Joloy continued relentlessly, 'And ever since then, when people walk by that cemetery late at night? They sometimes hear crying. . . the crying of babies. . . '

The group honoured this story with a long silence as they stared into the fire. It only stopped when Joloy jumped up to rescue Andy's marshmallow, which had caught fire again. Justin cleared his throat and asked Ethan, 'Do you have a ghost story to tell?'

'Do y'uns know Mr and Mrs McLane? They're an old couple, they live on a farm on the other side of Sligo. Their house is real old, a couple of hundred years.'

'Like ours,' put in Andy. Ethan nodded. 'Well, they moved in there a long time ago, when they were young. And every Sunday evening, when it got quiet in the house, they'd hear organ music in the living room.'

'What's odd about that?' Joloy asked.

Ethan looked at her seriously. 'They didn't have an organ.'

Everybody thought about that for a while. It was a pretty spooky thought.

'What did they do about it?' Andy wanted to know.

Ethan shrugged. 'Well. . . nothing,' he said. 'They said the music was really pretty, and they liked it.'

Justin rolled his eyes. 'That's about the dumbest ghost story I ever heard.'

Ethan looked hurt, until Joloy jumped to his defence. 'Well, I think it's a cool ghost story. Not everything has to be a horror movie around here.' And she passed around more marshmallows.

The kids got to talking about other things – the band concerts they were practicing for, and what they wanted for Christmas, and other important topics. But as Andy sat by the fire, thoughtfully munching on his last marshmallow, he thought he heard something rustling in the vegetation behind him.

He turned quickly. Were the Little People awake? he wondered. But it was only a rabbit, peeking shyly out from under a bush.