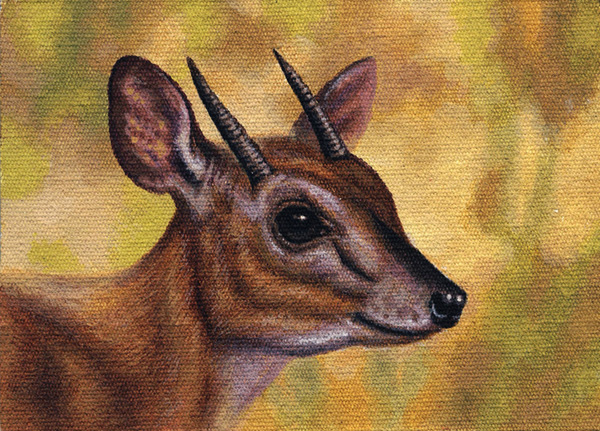 Again I have for you an exquisite little antelope which, for some reason, almost nobody (including in South Africa) knows about! This is a Suni, Neotragus moschatus. The scientific name means 'musky New-Goat', referring to this tiny thing's surprisingly pungent odour. It's not a goat of course, but a proper antelope. Other names for it are Musky Antelope and Livingstone's Antelope. It is one of the Dwarf Antelopes, which include the Steenbok and the Klipspringer. It's the smallest South African member of the group – and indeed competes with the Blue Duiker as South Africa's smallest species of antelope. At a bodyweight of 4-6 kg/9-13 lbs, it's about the size of a large cat. It is found from the northeastern parts of South Africa into Eastern Africa. It is called 'Suni' by the Wachagga people of Kenya, and 'Kasuni' by the Kikuyu, hence its common name.


The Tiniest of All

The Suni shares its genus Neotragus with two other African species, the Bates' Pygmy Antelope, Neotragus batesi, and the Royal Antelope, Neotragus pygmaeus. Both these species live in tropical rainforests and are rather smaller, the Royal Antelope being the smallest of all the world's antelopes, with a bodyweight from 1.5 kg to 3 kg, the size of a small to very small cat. Apart from size, they're very similar to the suni, with very slender lower legs but muscular and powerful haunches, which they use to rapidly run or bound through the forest when fleeing from potential predators, and very fine faces with pointy muzzles they use for delicately picking foliage from the shrubs or for picking up fruits and flowers from the forest floor. Both also have the very prominent facial glands, opening with a slit running from the corner of the eye as you can see in my painting. Unusually, these antelopes don't seem to use these facial glands as much for marking their territory as other prominently-face-glanded antelopes do. Instead the glands exude an odour which apparently plays a strong role in bonding between the males and females. These two tiny rainforest antelopes are poorly known, despite being hunted for meat.


Sunis are not only larger than these two rainforest antelopes, but also more widespread and somewhat more adaptable. They don't generally occur in very moist forest, instead inhabiting dry forests, or dense woodlands, thickets or riverine vegetation. They're likely so rarely seen as a result of being very wary and furtive. Their small bodies, with short, grizzled, rufous-brown hair, blend in with the relatively open ground of the forest understory. Only the side-to-side swishing of their tails, which have dazzling white undersides, gives them away (as might the white scrotum of the male, seen from behind). Sunis will freeze first when sensing danger, and then dash off uttering a bird-like 'chee-chee' call, diving into a known hiding place, such as a dense tangle of shrubs or vines.


Like its two close relatives, sunis are picky eaters, using their finely pointed muzzles and long tongues to pull leaves into their mouths. They will browse from living shrubs but also will pick up fallen leaves from the ground. They also will eat fallen or low-growing fruit, and sometimes mushrooms. They'll listen for monkeys, and seek out feeding troops that might drop leaves and uneaten bits of fruit. Unlike the larger antelopes, sunis cannot digest cellulose, the main, tough structural component of plant tissues, very well. Consequently they are more dependent on sugars such as are found in lush, soft leaves. This succulent food includes so much moisture that they don't need to drink. They forage for short periods, then rest, ruminate and digest for an hour or two, then forage again. They forage either in the morning or in the afternoon, including some hours of dark during the late evening or early morning. They're also active just after rains or when it's misty. They rest up when it's very hot. The leafy food travels rather quickly through their innards, and is then deposited in dung middens, which importantly advertise their presence in their own territories. They may mark trees and shrubs with the scent glands on their faces as well, and the glands on their hooves deposit their scent all along their trackways. The musky body odour that they have in addition to these, probably is most important when sunis meet each other up close, to ensure attraction between the male and female.


But male sunis, when meeting, don't appear to find each other attractive! For its size the suni is perhaps one of the most furious of fighters, and enough males manage to kill each other that there's a significant excess of adult females compared to adult males. Only the males carry the short, widely-set horns, which are mostly shorter than the rounded ears, the world record horn length being a mere five inches/13 cm or so. But these horns are very sharp and, wielded by the suni's short but strong neck, very dangerous. An adult suni male has his own territory, which includes or overlaps the territories of one or more females. The couples don't travel together, the male and female often going their way alone. Briefly they may partner up and may also be accompanied by the female's most recent lamb.


Not much is known about suni reproduction. They appear to mate in the summer, which is the rainy season over most of their range. The female gives birth to a single lamb, only very rarely twins. The little lamb will be hidden in the dense foliage, calling to its mom with a sound like rattling marbles when she approaches to suckle it. They very rapidly wean and start eating leaves. A female is sexually mature at the age of six months, a male at just over a year. Sunis can live for about six years.


These remarkable little antelopes still occur fairly abundantly over their range, despite suffering much from being hunted by humans. They're shot, caught in nets and snares, or hunted with dogs. Apart from people, they're also preyed upon by eagles, forest cats and pythons. They're also much affected by ongoing forest clearing, being unable to adapt to open or heavily man-modified habitats. It is therefore testimony to their resilience and ability to hide and escape from their human predators, that they still manage to survive in fair numbers.