Fiction Reading: The Streaming Video of 1919

The two items we've got for you this week come from the 20 December 1919 issue of All-Story Weekly. The Editor was drawn to this issue by the intriguing title of the lead story: 'A Goth in Boston'. Visions of young people with piercings and black nail polish just didn't compute with the date: investigation became imperative.

This first item here is an advert by the owners of the mag, the Frank A. Munsey Company. They're pretty up-front about their purpose in publishing fiction. They aim to sell advertising. They offer advertisers a 'two-fer' package that includes All-Story Weekly and Argosy. (You may have heard of Argosy. Thomas Harris wrote for Argosy before inventing Hannibal Lecter.)

The advert is interesting because it points out how popular fiction was in magazines of this type. Before anybody gets all nostalgic and uppity, pointing out how intellectual our ancestors were with all that fiction reading, let us obtain some perspective: This was 1919. There was no internet. There was no television. There was not even any radio. There were movies, but they were silent. Now: somebody offers you a magazine full of entertainment, for 10 cents a week, $4 a year? A bargain. It's either that, or go downstairs and listen to Aunt Molly play the latest hits on the piano, including 'All The Quakers Are Shoulder Shakers Down In Quaker Town'. Which is not as exciting as the title sounds. 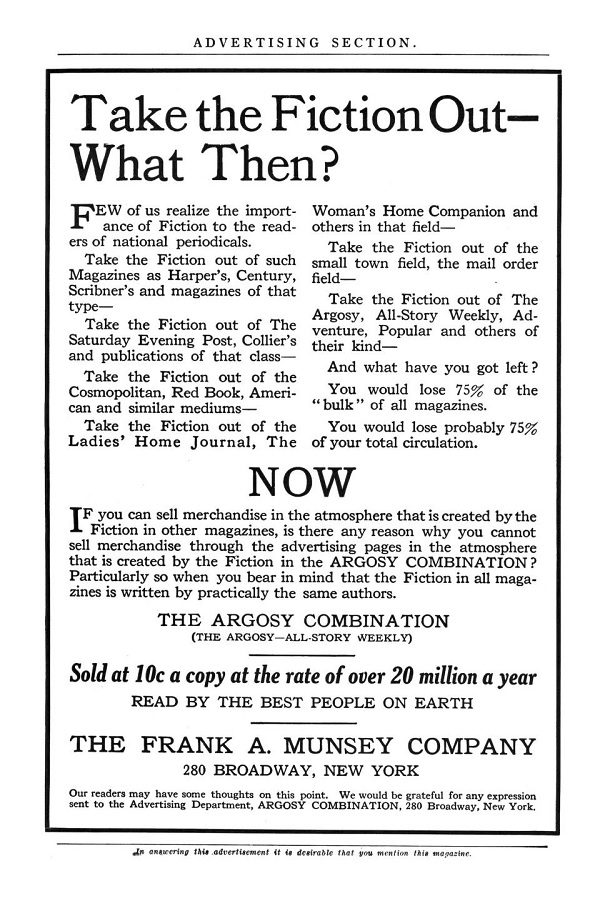 Sounds like a sure-fire money-maker. Alas, All-Story Weekly was enjoying its last fling. A mere seven months later, it ended its 11-year run by being absorbed by its sister publication, Argosy. Which as we said was still around in the 1960s when Thomas Harris was writing stories for it about Bonnie and Clyde.

Why, you may ask? What changed? Radio, for one thing. The first commercial broadcast was in 1920. Soon, people could have their fiction read to them, with sound effects. The new technology was pretty exciting. The music got better, too. More people owned cars. There was more to do. In 1927, the movies even had sound. The 20th Century was turning into a technology wonderland.

But pause, just for a moment, to savour 20 December 1919. It was a good year – the war was over, and so was the pandemic, finally, and Christmas was coming. It was a good time to curl up with a good, long 'short' story. Why not this one by Julian Hawthorne? 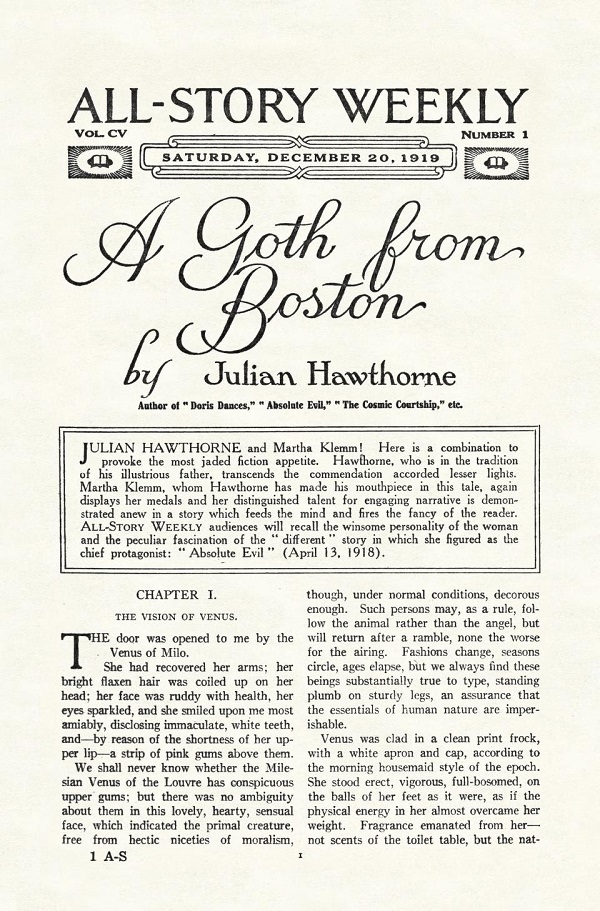 In case you're wondering: Julian Hawthorne was, astonishingly, the son of Nathaniel Hawthorne, the author of The Scarlet Letter. Like his dad, Julian was born in Salem, Massachusetts, of witchcraft fame. Julian lived from 1846 to 1934. Also like his father, Julian Hawthorne was a brilliant writer. Unlike Nathaniel, Julian did time in prison for mail fraud. Nathaniel's worst crime – apart from writing the awful Scarlet Letter   – was being friends with Franklin Pierce, one of the US's less stellar presidents.

The Editor thinks Hawthorne Junior is a better writer than his pop – even if nobody in 1919 agreed. Apparently, he had trouble placing his stories in his later years. Modern science fiction critics are scathing about his stories of domestic life on Saturn. Please, don't anybody tell JJ Abrams about them.

I started to say, 'If you want to know more about the Boston Goth, read on at the link provided above, courtesy of archive.org.' But don't, unless you want to be frustrated. That story is only Part I of the tale – and it left the characters on board a sailing ship in the middle of the Pacific in a terrific storm! If anybody can find the 27 December 1919 issue of All-Story Weekly, please let me know. I'm dying to find out what happened to them all.

Otherwise, go watch your streaming video. You can probably find that movie of The Scarlet Letter: you know, the one with Demi Moore in.