Tai Chi at the Summer Fair 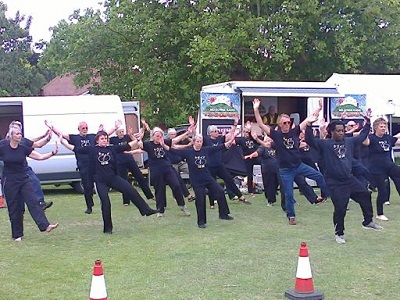 Rashly, I agreed to take part in a Tai Chi display. It was rash because I'm a member of a beginner's class and wasn't very familiar with one of the sequences. The display was due to take part in the town park, as part of the fun day which ended the Summer Festival. It was scheduled for three thirty but we were asked to turn up half an hour earlier. My husband and I left our bikes in the nearest rack and walked to the park.

It was full of activity. A little steam train chugged along a short track, giving rides for children. Vintage cars were lined up under the trees. Children tried their skills at spinning hula hoops, or queued for a chance to ride a bucking bronco – a wooden model of a cow, which tipped up and down. A young man walked round with a big, sand-coloured lizard sitting unperturbed on his shoulder. There were stalls representing local groups, including the Scouts and the Monday Group, which builds stiles and gates for footpaths.

I walked round the park twice before I found my group assembling. We were all wearing the black T-shirts of our Jade Mountain Tai Chi. Since these classes were organised by the local branches of the University of the Third Age and Age UK, the participants were all of retirement age. Grey haired women and a few men. Our tutor, a young black man with dreadlocks, stood out in this company. He works with several groups and I met people who had been practising Tai Chi for years.

We waited by an outdoor arena with public address system, while the previous group gave their performance. This was a song and dance group, represented by their students and some members of staff. The music boomed out, distorted by the wind and some of the girls' voices screeched. My husband wandered off. Meanwhile, I practised our sequences with another member of our group. Although the weather had been good all day, a few spots of rain now began to fall.

Our session began with a warm-up but then followed with the sequence of moves which makes up level three. This starts with a preparation posture that involves turning slowly to left and right on one leg. As most of the students can't do this, we are allowed to steady ourselves with a toe on the ground. Some of the movements have exotic names: white crane spreads wings, embrace tiger and repulse monkey. We followed on with level four, the fan dance. This ought to look lovely, as we open and close our fans and turn in different directions. However, I had only practised the last few moves a couple of times, and I was unsure of the sequence. I think I missed opening my fan at least once. It was a relief to end with level one, which everybody knew. By the time we finished, many of the groups were taking down their stalls and the afternoon crowds were wandering away.

Although I wasn't sure of my own performance, when I saw a video of the group as a whole, it looked good.