Awix is the expert. For ridiculous opinions on cinema, you get me.

Everybody loves a good ghost story, right? What's particularly nice about ghost stories is that they provide atmosphere in a low-budget setting. I mean, basically, you need to find an old house and fill it with actors in costumes. Make up a romantic story of love, loss, and longing. Add a curious ghost whisperer, something like that. You don't even need much in the way of gore, violence, or explosions. Most of the time, audiences will put up with a fairly slow pace, as long as the ghost tension is a-building.

It is probably not a good idea to spend most of the movie frying eggs, though.

I am frequently heard to comment in the middle of an indie movie, 'Ah, another $15.95 flick.' This is more of an appreciation than a criticism, as I don't care for big-budget pictures. I Am a Ghost was filmed using $10,000 raised mostly on Kickstarter. I read that $7500 was actually spent on production. Most of the money seems to have gone for old portraits from antique shops and other mood-setting decorations. The house looks like a B&B, only with fewer silk flower arrangements. Another major expense was poultry-related. I lost count of how many eggs Emily the ghost fried in that suspiciously clean-looking cast iron skillet, always two at a time. (She was handy with that spatula.) Unfortunately, every expense was spared in the costuming. Hint to costume makers: Don't ever run up a quarter-inch machine hem on the period dress the actress is going to wear on camera for over an hour. Just don't. The less said about the wig, the better.

Plot? You want a plot? Indie films are above that sort of thing. Oh, okay. Basically, I Am a Ghost is a story told from the POV of the ghost. I'll bet you guessed that from the title. You probably also guessed that Emily doesn't know she's a ghost. Not at first. The disembodied voice of Sylvia clues her in. Sylvia is a medium, although not a very good one. Although the movie is definitely not played for laughs, I predict chortling on your part, should you undertake to watch this. Which you might do. I Am a Ghost isn't terrible. You might find yourself remarking, 'Hey, all this routine and repetitive ghost behaviour makes sense. Maybe that's why I hear that thump from the attic every night around 3 am.' They're probably moving furniture.

The next ghost strikes me as being kind of conceited. Not only does Polly describe herself as 'the pretty thing you are looking at', but she tends to overidentify with any good-looking young female who enters 'her' house. This film is 87 minutes (seems longer), and has a slightly larger cast than I Am a Ghost: at least, you get to see a few more people, mainly Paula Prentiss, as the aged ghost-story novelist Iris Blum, Ruth Wilson as Lily the hospice nurse, and Bob Balaban as the pinch-penny Mr Waxcap, who's really just waiting for everybody to die so his foundation can have the house. Unfortunately, a larger cast does not translate into a more interesting film, because hardly any of the characters talk to each other at any time. Instead, they wander about aimlessly, muttering, discovering lost manuscripts, reading, writing, typing. . .

I began to wonder if this story wouldn't have been better told as a novella in Twitter form.

My quibbles about I Am the Pretty Thing That Lives in the House: 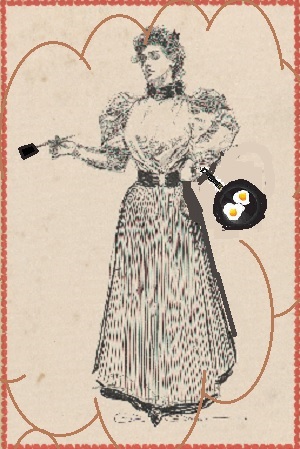 The Bottom Line: Films from the POV of ghosts are not new, but they can be fun. These are not two examples of the 'fun' variety. I would recommend avoiding I Am the Pretty Thing completely: if you paid for it, you would demand your money back. I Am a Ghost could be an enjoyable film to watch with friends, depending on friends, time of night, and general state of sobriety.

Alternative Suggestion: Go watch the 1935 classic The Ghost Goes West by director René Clair. A US businessman buys his ancestral Scots castle and takes it home with him. The ghost who comes along for the ride is much more popular with the ladies than he is. . . there are jokes, you'll like it, and nobody fries any eggs.

P.S.: The illustration is by me, with apologies to Charles Dana Gibson. It's put here as a helpful hint to the filmmaker of I Am a Ghost as to what an 1890s costume should look like. Thank me later.