This week, we thought we'd do some musical fact-checking. Unfortunately, a lot of the interesting songs aren't public domain yet. So we'll bring you this horror. Believe it or not, it was once a big hit.

You think you haven't heard this song. You have, and we can prove it. At some point in your life, you must have seen Gone With the Wind, that great epic film about hoop skirts and the girl who wore them. Scarlett O'Hara sings this song after a night of hot passion with Rhett. We don't know why. 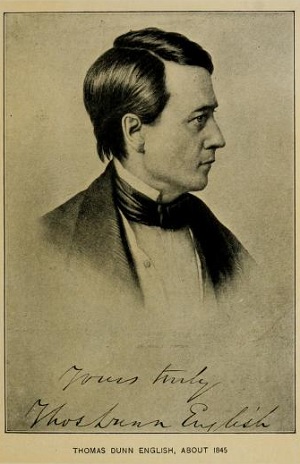 We're going to let this ancient author tell you all about the song Ben Bolt. We'll do some fact-checking, don't worry. Even the title page of the sheet music is a lie, as you will see. But for now, just bask in the delight of this never-to-be-repeated musical experience. (If you repeat it, you are a masochist. Edison cylinders are not for the faint-hearted, and make me want to turn off my hearing aids.)

You are fortified now. Turn off Youtube, and read. It's safer.

THE name of DR. THOMAS DUNN ENGLISH is familiar to the readers of the past forty years; but I think it has not generally been associated with this widely popular song. The music appeared with only the composer's name attached, and that has always been given incorrectly.

Dr. English was born in Philadelphia, June 29, 1819. He received the degree of M. D. from the University of Pennsylvania1 in 1839, was called to the bar in 1842, and has been a practising physician at Fort Lee, New Jersey2, since 1859. He was for years devoted to literary pursuits, as author, editor, and contributor to various periodicals. His vigorous poem3 'The Gallows-Goers' made a great sensation about 1845, when capital punishment was an exciting subject of popular debate4. A selection from his historical poems has recently (1880) been published in New York, under the title of 'American Ballads.'

'Ben Bolt' was written in 1842. Its author was visiting in New York, and N. P. Willis,
who with George P. Morris was editing the New Mirror, asked him for a gratuitous contribution5, and suggested that it be a sea-song6. Dr. English promised one, and on returning to his home, attempted to make good his word. Only one line that smacked of the sea came at his bidding7; but at a white heat he composed8 the five stanzas of 'Ben Bolt,' as it now reads, betraying the original intention in the last line of the last stanza9. Within a year the poem had been reprinted in England, and its author then thought it might be a still greater favorite if set to appropriate music10. Dominick M. H. Hay wrote an air11 for it, which was never printed; and Dr. English wrote one himself, which, although printed, had no sale12. It was written entirely for the black keys. In 1848, a play was brought out in Pittsburgh, Penn.13, called 'The Battle of Buena Vista,'14 in which the song of 'Ben Bolt'
was introduced. A. M. Hunt, an Englishman, connected with western journalism, had read the words in an English newspaper, and gave them from memory to NELSON KNEASS, filling in from his imagination where his memory failed. Kneass adapted a German melody to the lines, and they were sung in the play. The drama died, but the song survived. A music publisher of Cincinnati obtained the copyright, and it was the business success of his career. In theatres, concert-rooms, minstrel-shows, and private parlors nothing was heard but 'Ben Bolt.'15 It was ground on hand-organs, and whistled in the streets, and 'Sweet Alice' became the pet of the public. A steamboat in the West, and a ship in the East, were named after her16. The steamer was blown up, and the ship was wrecked; but Alice floated safely in the fragile bark of song. The poem went abroad, and obtained great popularity in England. The streets of London were flooded with parodies, answers, and imitations, printed on broadsides, and sung and sold by curbstone minstrels. A play was written there, based upon it, and as late as 1877 a serial novel ran through a London weekly paper of note, in which the memories evoked by the singing of 'Ben Bolt' played a prominent part in evolving the catastrophe17.

NELSON KNEASS (not Nicholas, as the name has been generally printed), came of a good family, but preferred a semi- vagrant life18. He was a teacher of music in New York, and a singer in the Park Theatre, and afterward became a negro minstrel19. He married a Mrs. Sharpe, who lost her life by falling overboard from a Mississippi steamboat20. He was a jolly, companionable fellow, 'nobody's enemy but his own21,' and ended a precarious existence in poverty. He always complained that he received but a trifle for the music22. The author of the words23, in true authorly fashion, never received anything, not even a copy of the published song, and when he complained of mutilation in the words, he was told that they were decidedly improved24 ! I give the original stanzas complete.

And Now, the Song

Try this out on a home instrument.

For the rest of the lyrics, and more fascinating stories behind even more beautiful songs, please consult Our Familiar Songs and Those Who Made Them. Three Hundred Standard Songs of the English Speaking Race, by Helen Kendrick Johnson, 1889.

That's what they had before Casey Kasem, folks.

1A fine institution with a lovely campus.2New Jersey is less lovely. 3We like vigorous poems.4Apparently, the debate was somewhat effective. Michigan abolished the death penalty in 1846. Later, Rhode Island and Wisconsin followed.5h2g2 gets a lot of these. (Look it up, lazy.)6Asking for a free poem and then suggesting the topic takes a lot of chutzpah, says the Post Editor.7Isn't that always the way it goes? You've got dozens of sea shanties in your head, but then somebody asks for one, and you're fresh out.8Stand back when poets get this hot. And keep the fire extinguisher handy.9In other words, the good Doctor approached the assignment much like Bluebottle, who is determined to work the Isle of Wight in there somewhere.10Define 'appropriate'. Unusually for us, we suggest heavy metal.11And some musical notes to go on the air.12Was it gratuitous?13That's 'Pennsylvania' in the days before zip codes.14The Battle of Buena Vista was fought during the Mexican American War (1846-1848). How they got that lot on stage is anybody's guess. We can't find a script.15It was an earworm.16Incorrect. The steamer and ship were named Ben Bolt, not Alice. I just found a passenger list for the Atlantic ship, and in 1855, JF Boyd was captain of the steamboat Ben Bolt.17So many evolving catastrophes could have been prevented by improving public taste.18This is all true. Kneass's brother, the unfortunately-named Horn B Kneass, was US District Attorney for Eastern Pennsylvania. His family disowned Nelson for going on the stage. Here's his burial information. Kneass is buried in Chillicothe, Missouri, where he'd settled after his travelling troupe became stranded there. The memorial page says, 'He performed with his daughter, Anne Rentfrow, playing Little Eva in Uncle Tom's Cabin.' We hope that it was Anne and not Nelson who played Little Eva. Otherwise, that was an even stranger performance than usual.19To clear things up: Mr Kneass did not actually undergo a genome change. He just did something unbelievably tacky in public.20We have no details on this calamity.21Oh, oh! Untrue, and we can prove it! Morrison Foster once called him a 'baffled rogue'. See the story of how he tried to steal 'Oh! Susanna'.22He probably did complain, loudly and often.23i.e., Dr England.24Opinions on the 'improvements' varied, even back in the 19th Century. We give you this, from Gustav Kobbé's Famous American Songs, 1906:

Afterwards the music and the garbled version were published, and to
this day the song is printed with the incorrect words. Two of the lines which Hunt had remembered correctly,

And the shaded nook by the running brook,

Where the children used to swim,

were changed at the insistence of the publisher, who objected that to sing about children in swimming would offend the sense of delicacy of some of his customers. In consequence the natatory diversions of the young hopefuls were eliminated from the printed version, and the youngsters have not been permitted to go in swimming since – at least not in the song!