From the Archives: An FDR Conspiracy Tale

'All through my life I've had this strange unaccountable feeling that something was going on in the world, something big, even sinister, and no one would tell me what it was.'

'No,' said the old man, 'That's just perfectly normal paranoia. Everyone in the Universe has that.'

Douglas Adams, The Hitchhiker's Guide to the Galaxy 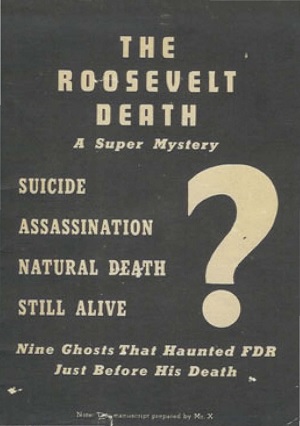 If you happen to find yourself over at the Internet Archive, do not, under any circumstances, launch a search using only the word 'Illuminati'. That way madness lies – srsly, about 2200+ textsful. Reading that stuff is bad for your brain. Just about every figure in history is now connected to that non-existent organisation. I wanted to find you a good, meaty conspiracy theory for our discussion of fake news, and this Illuminati tripe is so last-millennium. So let's talk about FDR.

Franklin Delano Roosevelt (1882-1945), otherwise known as FDR, was the 32nd president of the United States. He was elected to a record four terms1, but died suddenly in his fourth term. Many people believe that Roosevelt was a very good president: he shepherded the country through the Great Depression and World War II. His leadership was arguably one of the reasons that The Man in the High Castle is entertaining science fiction rather than depressing fact. Roosevelt is responsible for Social Security and all those WPA posters I love to steal.

The fact that FDR managed all of this while faking the public out about his health is a reason for many people to admire him these days. Back then, the public wouldn't have been reassured by the sight of a paraplegic in the White House. There was a certain amount of collusion involved in presenting the image of a healthy, standing-up president, who drove his own (modified) car. Amazingly, the press helped. They didn't print pictures of him in a wheelchair. Can you imagine this happening today?

In April, 1945, just as victory was being achieved in Europe, Roosevelt died of a stroke2 at his retreat in Warm Springs, Arkansas. It was a shock to the nation that didn't know how ill he was. It was also bad news for poor Harry Truman. The vice president was quickly sworn in, taken aside, and informed in a whisper that 'there's something you need to know about, it's called an A-bomb, and you have to decide…' That has to have been a record-setting surprise.

Anyway, so much for background. Let's get to the conspiracy theory.

With all the good things we've listed about FDR, it may surprise you to find out that many people complained about him, loudly. Maybe it wouldn't, if you've been studying US politics for more than five minutes. Among those who detested Roosevelt were the kind of people who joined the John Birch Society, a 'conservative advocacy group supporting anti-communism and limited government' (their words) or a 'conspiracist group exiled by the right' (the Southern Poverty Law Center), take your pick. We don't know that 'Mr X', who wrote the amazing pamphlet The Roosevelt Death: A Super Mystery was a John Bircher. But if they didn't try to recruit him, they missed a golden opportunity. Even a cursory reading of this remarkable 30-page prose screed reveals an author who is both strongly anti-communist and deeply anti-Semitic. And he really, really doesn't like Roosevelt. He suspects him of being in league with Stalin.

Mr X wants us to know what 'Roosevelt and his henchmen' were up to: no good, obviously. He accuses FDR of wanting to rule the world, like every dictator before and since. Mr X suspects that Roosevelt was poisoned by the communists, because he had served his purpose in handing over world domination to the Soviets. Or maybe, he was poisoned by the Jews, because they found out he wouldn't back their Zionist plans3. Or, wait! Maybe the 'super demagogue' couldn't stand it any longer. Perhaps he was haunted by the 'ghosts' of those he had wronged, kind of like Richard III. Maybe. . . he killed himself. Whatever happened, why was there a closed-casket funeral? What were they hiding? Was it true the late president's body had turned black four hours after death? That was surely a sign of something4. Or was the death itself a fake? Was Roosevelt alive and in hiding somewhere?

Herewith a brief excerpt from The Roosevelt Death: A Super Mystery. If you enjoy this sort of thing, read the rest at archive.org.

A final note. The terms of the document's public domain status include the following provision:

In some jurisdictions moral rights of the author may persist beyond the term of copyright. These rights may include the right to be identified as the author and the right to object to derogatory treatments.

For that reason, we urge you to reread the foregoing. You will notice that we have said nothing derogatory or demonstrably untrue about Mr X. And although we suspect he may not be reachable for comment5, he is welcome to step forward and be identified, should he find himself among the living.

No statement from the White House, no report from the palace guard7, no public expression from the Roosevelt family has ever been made concerning the denial of Stalin's request8. If the Roosevelt family and their political coordinates were of a modest and retiring nature, this might be understood as being merely a natural display of modesty. But the Roosevelt family talks about everything9. Nothing seems to be sacred as far as domestic problems are concerned. Divorce scandals, profiteering scandals, money-making enterprises indulged in by Eleanor Roosevelt and the children10, seem to cause them no
anxiety or chagrin. Eleanor Roosevelt in her column has discussed everything from the mating dates of the household dogs11 on up to how much an American girl should drink. She has advocated the intimate and social intermixture of black and white12. She has entertained Communists in the White House. She has addressed, encouraged, and inspired practically every left wing, pro-Stalin, pro-Communist organisation in the United States13. The Roosevelt sons have indulged in all the more crude forms of conduct necessary to establish themselves as brazen extroverts. Franklin, Jr., while in Paris, squirted champagne in a diplomat's face14 . Elliott obtained air passage priority, in time of war, for a dog belonging to his second wife (an actress15) in a time when it was necessary to leave military personnel stranded in order to care for this dog belonging to the wife of a 'prince.'16 In the midst of a blare of trumpets17 the Roosevelt daughter, Anna, divorced the father of her children and remarried. The antics of the elder son are too numerous to mention. As a manipulator of high finance, he has been more successful than his brother Elliott, although neither ever missed an opportunity to use their father's power to turn a good deal for themselves18.

Along with everything else. Franklin, Jr., who would like to step into his father's boots, married a DuPont19. John, the youngest son, has been the most retiring member of the family.

John Roosevelt's secret is little known. While the President and his wife Eleanor were shouting for war, their youngest son was a conscientious objector20. He believed that the war was unnecessary, that it could have been avoided, and that it was precipitated by the lovers of war. He refused at first to enlist or to serve in any military capacity whatsoever. Finally, under pressure from his mother, he accepted a military post in the South Seas with the understanding that at no time would it be necessary for him to take a life or engage in combat. This conduct on the part of the youngest Roosevelt was pretty well covered up, and to this very day not one person out of ten thousand knows the story. There is much more to tell, but space here does not permit21.

Thus, even a superficial survey of the conduct of the Roosevelt family should convince any person with ordinary intelligence22 that the Roosevelts are not modest, retiring or timid. The casket was left closed because somebody had something to hide. What it was we may never know exactly but some of us have some well-founded23 suspicions.

1That wasn't unconstitutional back then. It is now. They changed the law. Now, you can only have to put up with a president you don't like for eight years. After that, you probably get another president you don't like, only for different reasons.2He definitely died from a stroke. People were cagey with medical records back then, and FDR's have disappeared. There has been a lot of discussion as to whether the president had various types of cancer, melanoma, brain tumour, etc, that hastened his end. We may never know, even with all those doctors peering at old photos.3Roosevelt was on record as opposing the establishment of Israel.4Poisoning? Or an unusual medical condition?5Without a Ouija board.6This is the actual subtitle from the pamphlet, not made up by us.7We assume the White House staff is meant here.8Stalin sent his envoy, Andrei Gromyko, to view the body. Gromyko was denied access.9In other words, they were into 'transparency' at a time when 'transparency' was not fashionable.10We're pretty sure the Roosevelt offspring weren't selling eau de parfum.11Optical Character Recognition originally rendered 'dogs' as 'clogs'. I had a very funny footnote about the mating habits of Dutch shoes, which was shot down by more sober reference to the original text. Why shouldn't people be interested in the dogs? FDR's pet, Fala the Scots terrier, was so famous there are statues of him.12Eleanor Roosevelt was an outspoken advocate of civil rights.13Eleanor Roosevelt also opposed the work of the House Un-American Activities Committee. The FBI kept a file on her until her death in 1960.14Wrong. It was John. It was at Cannes, it was the mayor, and he didn't squirt it (in spite of the newspaper headline), he threw it. From a glass. Apparently, John didn't know he was the mayor, and 'misinterpreted' (so the Chicago Tribune) the gesture of offering him a bouquet. The mayor of Cannes was forgiving. He said, 'In my studious youth in Paris I have been with medical and beaux arts students who let themselves go under similar circumstances, resulting in similar regrettable manifestations.' Good sport, that mayor.15Obviously a suspect person, though not a DuPont, see below.16Nope. The part about bumping the servicemen off, at least, was not true. But the dog flight (there was a puppy, too) was against regulations. Read all about it.17We find no evidence for this musical claim.18These generalised statements are too vague to verify. We won't award any Pinocchios.19True. The first of Franklin Roosevelt, Jr's five wives was a DuPont. We're not sure what to make of 'along with everything else.' Meaning 'marrying a DuPont puts the icing on the cake'?20Well, he considered it. John Roosevelt had pacifist leanings, but his mother told him he couldn't afford them because of his father's job. Before the war, John Roosevelt worked as an assistant manager in Filene's Department Store in Boston. Apparently, he was quite popular with the bargain hunters.21What a shame. We miss out on researching more ancient gossip.22And common snobbery.23???