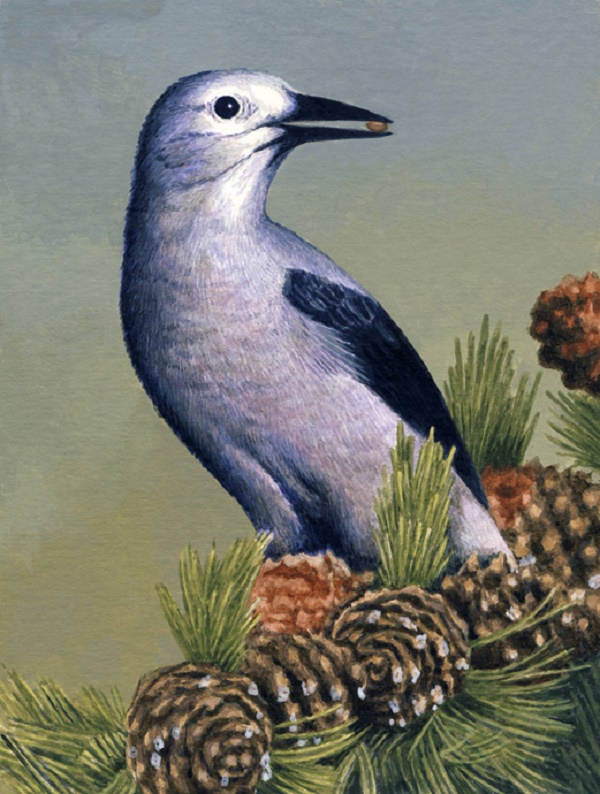 This time I bring you a little birdie I'm actually not familiar with at all! This is Clark's Nutcracker, Nucifaga columbiana. The scientific name means 'Nutcracker from Columbia' and the popular name commemorates William Clark, of the Lewis and Clark expedition which explored America from St. Louis to the Pacific Ocean in the early Nineteenth Century. They were the first Europeans to see many places and many things; this bird was only one of the many kinds of wildlife Clark and Meriwether Lewis were the first to record. Dmitri mentioning the Lewis and Clark expedition gave me the idea to choose this worthy subject for a proper article. Not having seen it myself, I'm indebted to my bird books (mainly, 'Crows and Jays' by Steve Madge and Hilary Burn) for the info in this article.

Nutcrackers are indeed members of the crow family, the Corvidae. This family also includes choughs, magpies and jays. It is quite a diverse family, especially in tropical Asia and South America, but North America also has its share of species. Outside of America, two more species of nutcracker occur, also in the genus Nucifraga: the Spotted Nutcracker and the Larger-Spotted Nutcracker. The latter species is not always recognized; sometimes it is included as a sub-species or race of the Spotted Nutcracker, to which it is very similar. The spotted nutcracker occurs in Europe and northern Asia, the larger-spotted is restricted to the western Himalayas. Both of those are dark brown to blackish, with white spots on their backs and underparts. Clark's nutcracker looks quite different, with a neat, bluish-grey body and shiny black wings and tail. Not visible in the picture, are the white outer-tail feathers and the white panel in the secondary feathers of the wing, which are mainly displayed when it is in flight. The white, black and grey contrast neatly with each other so that, while not colourful, this bird is still dashingly plumaged. The black bill and eye also contrast with a white patch on the forehead and face. Clark's nutcracker is small for a crow, indeed being more like a large starling in size, reaching 31 cm/just over 12" in overall length, and a weight of about 160 g/5.5 ounces. Males are slightly larger than females, but otherwise similar.


This species is found in the western USA, north-western Mexico and southwestern Canada, being associated with coniferous forests of the Rocky Mountains and associated ranges. They usually occur higher up the mountains, above 1800 m/6 000' and right up to the treeline. They can be found either as couples or in small flocks. Outside of the breeding season, they can form larger associations. In normal seasons, pairs mate and together defend small territories. They are vocal, with harsh, crow-like calls as well as some sweeter calls. They utter a variety of screeching, cracking and whistling calls as well. They make cup-nests from twigs and bark fibres; clutches consist of two to six eggs, and males and females both incubate the eggs (nutcrackers are unique in the crow family for sharing this duty) and later feed the chicks.


So where does the nut-cracking come in? Actually, Clark's nutcrackers feed mainly on pine nuts, as you can see in my painting. They're especially partial to Pinyon Pines and Whitebark Pines. They use their strong, stout bills to hammer or crack open the pine cones and then extract the yummy nuts, easily crushing them with their bills. They feed on some other nuts and seeds as well, hammering with their bills to crack the shells. They'll sometimes wedge a nut in a crevice in the bark of a tree to do this, or otherwise hold it firmly with their feet. Aside from the nuts, they feed on small amounts of invertebrates, such as beetle grubs found in bark or on the ground. They do indeed feed on the ground quite a bit, travelling with sprightly hops, picking up nuts and seeds and small critters. They even sometimes catch small vertebrates like mice, and will eat the eggs of other bird species.


In years when there are failures in pine nut crops – as happens on occasion – the nutcrackers are in trouble. They then engage in a mass exodus from their typical habitat, seeking different sources of nourishment. In such crisis years they sometimes even turn up in the desert! Most nutcrackers perish in such seasons but they make up their numbers again as soon as the new crop of pine cones arrives.


Like some other members of the crow family, they are bold and inquisitive and often become very tame around humans. They'll scavenge titbits around human campsites and even enter cabins and tents in search of food. Like the mangabey monkeys I've featured here recently, they have special pouches in which they can store food temporarily. In their case, the pouch lies just below their tongues. This enables them to collect large amounts of food at a sitting, to eat it in peace and safety later, or to put it in a food store to last for a long period.


Planters of the Forests

It is in this last respect that nutcrackers turn out to be enormously valuable to the forests. A nutcracker will, in years of abundant pine nuts, collect far more nuts than it can actually eat. What they typically do, is to store these nuts in convenient places, digging a hole in the ground, putting the nuts in, and covering it up again. They come back to these caches later, to eat some of this food, or to take some of it to their chicks, but often they store more than they need. And what happens to the nuts they don't come back to and eat, either having forgotten them, or not having needed them? These nuts stay safely buried underground through the winter, and come spring, with warmth and rain, they germinate! The birds are literally planting these trees, often in areas which would be tough for their seeds to germinate in without assistance, such as in hard ground, and also a good distance away from the parent trees, where the seeds won't easily be able to arrive without help. The birds likely don't even realize they're doing this, but they are, and in doing it, they're doing a service both to the forest and to themselves. (Other animals that hoard seeds in the ground and thus help 'plant' many tree and shrub species include squirrels, mice and rats, and here in South Africa, even ants!) With whitebark pines currently in decline in America, the nutcrackers are doing vital work.


Clark's nutcrackers are long-lived for birds, having been recorded as exceeding the age of 17 years in the wild. Overall this species is abundant, fairly widespread, and not endangered.