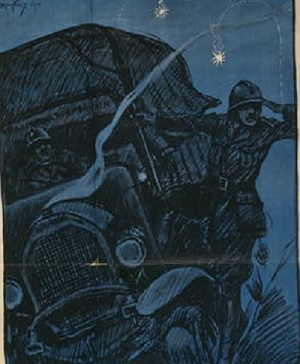 One gloomy winter night, in a seaside bar, two young fellows were discussing the coming events that would have repercussions worldwide for years to come. One was a fisherman, who followed in his fathers and grandfathers trade, of sea fishing, whose catch helped the local community. The other chap was just a local work-hand, who could put his hand to anything and would take work wherever it was going.

But on this night above all others, where they were usually in a cheerful disposition, as two lads enjoying a night out in the town, were more silent in their own contemplations. As one was still going to carry on fishing, as food rationing was on the cards, the other, he was going to sign up for the King's Shilling and do his duty for the country.

The time came for them to leave the bar and go their own way, both having one final manly hug and vowing that after the Great War (WW1) they'd meet up again at the bar and share events over the usual pint of draught bitter.

Well, time flowed forever forward and after World War 1 and peace returned, but unfortunately THAT peace was interrupted by the onset of World War II. Again, that came to pass therefore, entering the history books and peace to a degree returned to the world.

Now 60-plus years on, and going back to that pub in the seaside town, wintertime is back and again a gloomy night, sat at a table is a elderly chap, with a half pint glass of draught bitter, sat with his own thoughts, when another elderly gent comes and sits beside him. As he sits down, they look each other in the eyes, signifying acknowledgement of each other.

But! Before either can speak! The bartender makes an announcement – can all patrons please be upstanding and take a toast, tonight on the 63rd anniversary of the untimely deaths of two young chaps, who left this bar 63 year ago, to go do their duties, one in the field of providing food for the country and the other in military service, who unfortunately died when a runaway lorry ran into them seconds after leaving the establishment.

Not a story within a story, or is it ?