Do you see pictures of ghosts on your interwebs? Here's how that started.

An Expert View of Spirit Photography

Arthur Conan Doyle believed. So did many others. Some mocked, and today, we whisper 'photoshop'. But 'spirit photography' was once all the rage. Read all about it in J Traill Taylor, The veil lifted: modern developments of spirit photography, 1894. Here's an excerpt and a sample. Try not to laugh, we dare you. 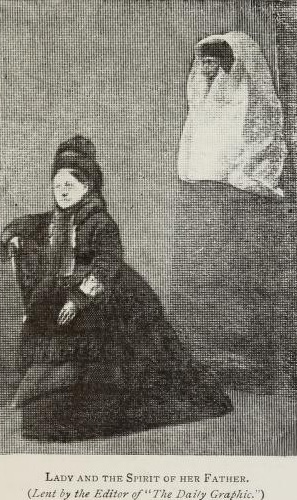 The most authentic ghost photos are the hardest to get hold of. They are in the hands of private amateur photographers, who are shy of lending or showing them1 because they are
shy of being accused of fraud or folly2; besides, to them these photos are often sacred, or they seem to portray the features of the beloved dead. I believe Mr. Crookes, F.R.S., one of the greatest scientists living – the renowned inventor of the radiometer3 – has obtained spirit photos of a materialised form that appeared apart from the medium, and moved about the room freely while a continuous current of electricity was being passed through the entranced medium, so that she could not move without betraying the motion. But, like the wise man he is4, Mr. Crookes, after having tasted the quality of scientific bigotry, and already suffered somewhat for his ardour in the pursuit of unpopular and novel truth – Mr. Crookes, I say, keeps certain experiences, together with his abnormal photos, to himself, and will not now even show them. It is of no importance to him what those who do not and cannot know the facts think about them5. They belong to his laboratory work. Why should he bother himself with a crowd of outsiders Of course, no spirit photo, of itself, can bear conviction, nor is it possible to produce about it in a journal any evidence that will. The two spirit photos I have been prevailed upon to allow the Editor of the Daily Graphic6 to use with this open letter are, nevertheless, of considerable interest, (i) The lady seated went with her daughter. She did not tell the photographer who was in her thoughts. She thought of and longed for her father to appear. She did not even tell her daughter or any one else the mental test7. She thought that her father should appear wearing a peculiar black cap which he commonly used during the last days of his illness8. That test was never revealed before the plate was developed; but it was answered, as may be seen in the photo (see opposite); the features also are too marked to allow of any doubt9.

Ed Note: We don't know about you, but we are convinced. It only remains to explain why ghosts insist on walking around draped in sheets from the White Sale. Maybe they have fashion statements over in the Summerland, too.

1They simply treasure them in private, like the anoraks they are.2Now, who would do that? Shame.3'A device for measuring the radiant flux (power) of electromagnetic radiation.' (W*k*p*d**) Hold it, is Crookes responsible for all those ghostbusters on the off-brand TV stations carrying EMF meters around haunted buildings? Wow.4No comment.5Alas, he lived before the advent of the UFO conference held at local motels.6A great name. We are jealous.7Amazing. And yet this guy appeared.8Unfortunately, not a baseball cap. He was obviously British.9Yep. Looks just like Mr Jones.