It's time to really tempt fate here, and quote the Scottish Play.

We're not going to say the name of this play by William Shakespeare. Not out loud. And thereby hangs a tale, as the Bard would say. A couple of decades ago, Your Editor was participating in a minor way in a production of the Scottish Play at a Benedictine college. The director, an Irish American Catholic, at first refused to acknowledge the play's many superstitions: that it was cursed, that you couldn't say the name, quote it unless in rehearsal or performance, whistle in the theatre, etc, etc. Allegedly, all this superstition was because King James VI and I had seriously annoyed some witches by writing that book, Daemonologie. Anecdotal evidence had piled up over the centuries that the play was bad news: deaths onstage, falling props, etc.

Our devout director decided this was all heathen claptrap, and would stop now. He went around saying the name of the play, quoting it, and generally flouting all the theatre traditions. Until the last week, that is. When the prop manager, who also happened to be playing the lead, was plagued with the repeated explosion of his facsimile severed head, this was merely an annoyance. When Lady MacDuff ended up in A & E with a bandsaw injury (she was helping the Thane of Cawdor with the set building), Flanagan got nervous. When the two Macs practiced their duel, using blunt but metal swords, and one of those swords flew out into the second row of the fortunately empty audience, and this was two hours before the dress rehearsal, we had all had enough. We needed expert advice.

We called the director of the Shakespeare Company in the nearest city. He set us straight as to how to deal with the Scottish Play. Which is why we forced people to go out the back door, swear, and knock for readmittance whenever they broke the rules. Which is also why we all went on the next night with cedar chips in our underwear. Apparently, wearing cedar next to the skin is the only surefire way to beat those witches.

And now, children, let's test your knowledge of the Scottish Play. Answer the questions about the quotes.

Okay, made you work. Click on the picture for answers. 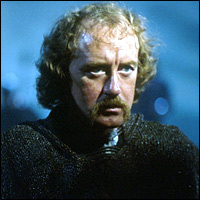