This week's Literary Corner is affectionately dedicated to our Bluebottle and all the other trainspotters out there.

This excerpt comes from a 'boy's book' called The Rocket, by HC Knight, 1897. Guess what the Editor was actually looking for. The story of George Stephenson is both edifying and surprisingly interesting. (Warning: The preface contains a sermon.) This author also wrote a book with the surprisingly modern title, No Gains Without Pains. We think you'll get a charge out of this one, especially if you enjoy steam engines. 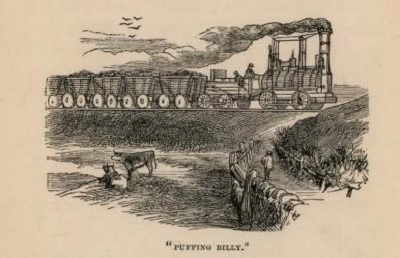 FAMILIAR as it has become to us, who does not stop to look with interest at the puffing, snorting, screaming steam-horse1? And who does not rejoice in the iron-rail, which binds together, with its slender threads, the north and the south2, and makes neighbours of the east and the west?

"Who began railroads?" ask the boys again and again3.

The first idea of the modern railroad had its birth at a colliery nearly two hundred years ago. In order to lighten the labour of the horses4, the colliers laid straight pieces of wood into the road leading from
the pit to the river, where the coal was discharged; and the waggons were found to run so much easier, that one horse could draw four or five chaldrons. As wood quickly wore out, and moreover was liable to rot, the next step was nailing plates of iron on the wooden rails; which gave them for a time the name of "plate-way roads." A Mr. Outram making still further improvements, they were called "Outram roads," or, for shortness' sake, "tram-roads"; and
tram-roads came into general use at the English collieries.

"There's mischief in those tram-roads," said a large canal owner, foreseeing they would one day drive canal stock quite out of the market5.

Improvements thus far had centred on the roads. To convey heavy loads easier and faster was the point aimed at. Nobody had yet thought of self-going trains. Watt, the father of steam-engines6, said steam-carriages might be built. He, however, never tried one, but rather left the idea to sprout in the brain of an old pupil of his, William Murdock, who did construct a very small one, running on thin wheels, and heated by a lamp. It was a curious success in its way, and set other minds thinking7.

One of these was a tin-miner of Cornwall, Captain Trovethick, a friend of Murdock, who joined a cousin of his in getting a patent for building a steam-carriage. It was built, and an odd piece of machinery it was. It ran on four wheels over a common road, looked like a stage-coach, and delighted both the inventor and his friends8.

They determined to exhibit it at London. While on its journey, driving it one day at the top of its speed, they saw a toll-gate in the distance. Not being able to check it in time, bump it went against the gate, which flew open in a trice, leaving the affrighted toll-man, in answer to their inquiry, "How much to pay?" only able to gasp out, " No – nothing to pay ! Drive off as fast as you can! Nothing to pay9!"

It reached London in safety, and was some time on exhibition. Multitudes flocked to see it, and some called it a fiery dragon10.

"Ah," said Sir Humphrey Davy, very much interested in the invention, "I hope to see the captain's dragons on all the roads of England yet11."

But the captain exhibited it only as a curiosity, the unevenness of the roads rendering it for all practical purposes a failure; and he had neither pluck nor genius enough12 to lay or clear a track for it himself. This was in 1803.

The idea, however, was in England, lodging itself here and there in busy brains13; until, at last, a colliery owner in Newcastle, seeing the great advantage of having a locomotive on his tram-roads, determined to try what he could do. Accordingly, he had one built after the Cornish captain's model. It burst up14 at starting. Noways baffled15, he tried again. The engine proved a clumsy affair, moved at a snail's pace, often got off the rails, and at length, voted by the workmen a "perfect plague16," it was taken off. The
unsuccessful inventor was called a fool by his neighbours, and his efforts an apt illustration that "the fool and his money are soon parted." In spite of failure, Mr. Blackett had faith that the thing could be done. He built a third, and ran it on the tram-road that passed by old Bob Stephenson's cottage door. And George at his colliery, seven miles off, as you may suppose, listened to every account of it with profound interest. Over he went, as often as he could, to see "Black Billy," as the locomotive was called – a rough specimen of machinery at best, doing very little service beyond what a good horse could do17.

George carried "Black Billy" back in his mind to Killingworth, studying its defects, and laying plans to improve it. I do not know how long he was in coming to it, but he at length gave it as his opinion that he could make a better "travelling engine" than that.

And so he could, friends. Read on for more exciting adventures in inventing.

1Who, indeed?2Who does not rejoice? Yorkshiremen do not rejoice. Ask the Prof.3The girls just google it. Girls are clever like that.4Colliers were thoughtful. PETA would approve.5We think this was an ancestor of Donald Trump's.6He was a great dad, too. They came to visit on Father's Day, and boy, was it loud.7Mostly, 'How can we cash in on this trend?'8They were easily amused in Cornwall.9Anecdotes like this are why we read these things.10Monty Python made a sketch about it, which was banned by British Rail.11Sir Humphrey Davy was a great wit.12Qualities of successful businessmen, obviously.13Busy brains are needed today. Come back and stand for Parliament.14We think that means there was an explosion.15They're calmer in Newcastle than at Cornwall toll booths.16For three months running.17Note: At this point, we have horses in smug mode.