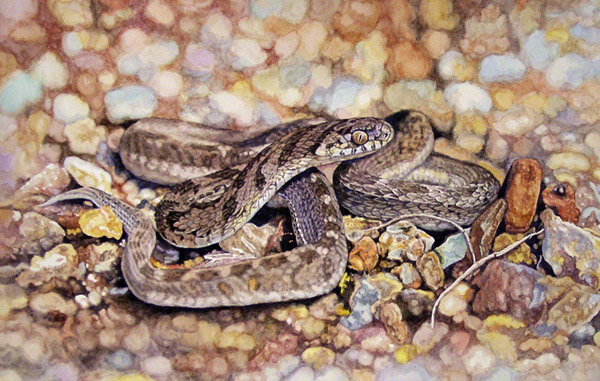 Back to reptiles! I've recently made acquaintance with a young man, Ruan Stander, who's really into lizards and snakes, and he's given me permission to use some of his photos for reference, so credit goes to him for his photo of this Rhombic Egg Eater, Dasypeltis scabra. Big name, for a small snake! Egg eaters rarely grow longer than about a metre/yard in length, but more typically measure about 60 cm/24". There are three species in Southern Africa, this being the commonest and most widespread.

Egg eaters are not venomous. Indeed they don't even have fangs! They don't need teeth at all. They eat eggs, as you might have concluded. They have a remarkable talent for finding birds' nests with eggs in them. They're nocturnally active, so they must have some means of egg-detection in the dark. Thanks to an extremely elastic jaw and skin, they can eat eggs up to four times as wide as their own heads! They swallow these eggs whole. They don't actually dislocate their jaws when they do this – the jaws remain attached to their skulls – but the lower jaws stretch out sideways; the two halves of the lower jaw are connected at the front with a very elastic ligament, which stretches out to accommodate the jaws going out to the sides. The snake slides its lips and jaws forward over the surface of the egg until it's completely inside the mouth, and then swallows it. Instead of teeth, it has sharp prongs projecting from the vertebrae in its throat region. They poke into the back of the throat cavity and when the egg moves past them, they puncture its shell! The tasty juicy stuff then flows out and the snake swallows them. The egg shell itself collapses, and after it has swallowed all the contents, the snake spits out the shell again.

When not hunting eggs, these snakes shelter in hollows in old termites' nests or under rocks. These fangless little snakes are actually quite vulnerable to predators. All they have going for them, is bluff. In pattern and rough appearance they do look somewhat similar to some of the venomous species of adder occurring in Southern Africa. To augment this, they will also open their mouths, which are dark-coloured inside, as if they're preparing to strike – hoping that their attacker doesn't notice that they don't have fangs! They can't even hiss properly, but mimics the hiss by rubbing their rough scales over each other while coiling their bodies threateningly.


Unfortunately this bluffing sometimes works against them. While predators might leave them alone, humans often kill them when mistaking them for venomous species! But fortunately these little snakes are not rare, occurring very widely and in abundance in the savannahs of southern Africa.