The Contents are all touching, picturesque, delightful, and
instructive. – Literary Gazette1. 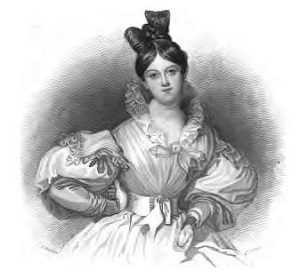 Ed. Note: Upon opening Ethel Churchill, or the Two Brides2 by Letitia Elizabeth Landon (London, 1837), I was moved to exclaim…

Who talks like this? Apparently, the author thought people did. Maybe they should all have gone to visit Charlotte M. Yonge in Eastleigh. They could have had a nice chin-wag over tea.

That's a picture of Letty Landon, as her friends called her. Very lively woman, and admirable in many ways. She took up writing to support her brother, and the creep wasn't even grateful. (His first name was Whittington, which may have soured him to start with.) People spread a lot of vicious rumours about Letty, which ruined her first engagement. Then she married a Scotsman, of all people, moved with him to South Africa, and died mysteriously three months later. (There was a bottle labelled 'prussic acid' by her side, but forensics were terrible back in 1838.) We feel bad. Letty would have made a good h2g2er, even if she gave the Subeditors migraines.

Here's the opening of the novel, minus the poetry (we spare you):

"And yet, you chose to marry him!"

"I did, and should marry him again; but bear with me for this night, dearest uncle, as you
have often borne."

The old man's answer was to pass his hand caressingly over the beautiful head that rested on
the arm of his chair; and his niece continued.

"My spirits are overcast with a sadness which I have not hitherto known, and inexplicable
too. Did I believe in omens, I should say that my depression was ominous."

"It is the idea of departure – but you always wished to visit London."

"And wish it still; but I knew not, up to the hour of parting, how much it would cost me to
sever myself from my kind, my only friend."

"You have your husband, Henrietta;" but the expression which accompanied the sentence
was half sarcastic, half distrustful3.

A still deeper shade of doubt passed across the high and finely cast features of the youthful
Female4.

"You have, from my cradle5, impressed upon me the folly of love; and so far as my knowledge goes, it goes with you. All the affairs of the heart that I have witnessed, have excited but my wonder or contempt; nor could I ever understand what people see so charming in each other. I could no more pass hours away, like dear Ethel, in imagining perfection in a nameless boy, than I could yield up all my faculties to the arrangement of colours in an endless Penelope-pleasing piece of embroidery; perhaps I am too quick-sighted for the delusions of love."

"Be your eyes never dimmed then," said the listener bitterly.

"Yet, if I put love out of the question, I could wish for something like affection; for, much as it accords with Hamlet, and with usage, to be ' little more than kin, and less than kind,' still, Lord Marchmont's coldness6 oftentimes comes over me with the effect of suddenly rounding a headland in one of our valleys, and finding the north wind full in my face. He takes not the
slightest interest in aught I say, and I have continually thoughts and feelings which I am restless
to communicate. Here I do feel not this" – and she turned towards him her glistening eyes – "for my own dear uncle will always hearken to me, explain, encourage, and shew me how to comprehend others and myself. But, far away from him, surrounded by new scenes, filled with fresh impressions, longing to clothe in utterance all the bursting thoughts they will excite7, must I be lastingly condemned to a silent life, and a closed heart."

Ed. Note: We bet romance is just around the corner. Maybe after tea and a walk around the begonias. However, we suspect the reader will be lastingly condemned to more prose like this, and extremely stiff sentiments encased in quotation marks.

With discussions like this going on, we wonder how in the world the population got so out of control.

Read the rest of this at your risk. The management takes no responsibility for brain damage caused by Letitia's writing. Warning: That link is just to Volume I. There is a Volume II.

1They said it. We didn't.2Don't ask why I did this. I don't know, some self-destructive impulse, or my blood sugar was too low.3I would be distrustful, too, if her husband's name was Henrietta. At least, in 1837…4Am I the only one who now thinks this author is a Ferengi? 'A hyuu-mon fee-male'…5We now picture Uncle Whatsit in the nursery, leaning over a cradle, and delivering a lecture to Baby Henrietta on the folly of love. Stop this. 6Why are these guys always named 'Marchmont' or 'Marchbanks', or something with 'March'? Victorian authors really needed an online name generator.7Just like the author, who obviously longs to 'clothe in utterance' the most bizarre of thoughts. We wonder what excited them.