Freewayriding's sense of freedom took him on the road. 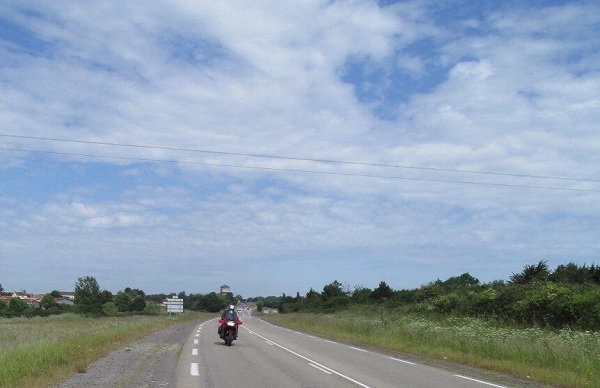 The rain and mist put a literal damper on our run up through the Highlands, ever northward to the End of the World. I remember standing in a rather muddy Orcadian field, shivering in my bike boots, raising a glass to a dear departed brother on Badgers Bimble in 2013.

Whiskey fuelled ideas on the next club run began in earnest as the heavens opened once again.

That evening we discussed France, Spain, Portugal, then, becoming more lubricated, The States, riding through India or Africa....before realistically returning to Europe.

Changes were made, budgets compared and time off work calculated around school holidays and family commitments.

The final plan back then was to tour Germany, Hungary and a bit of Poland, most of the lads have toured before, have a little German and we all like a bit of scenery and history.....then the unthinkable happened. Brother Fiddly became unwell, very, very unwell, losing a very brief battle with the same cowardly enemy that had claimed Badger a few years earlier. The next run was now to be Fiddly's Farewell, a memorial to a wonderfully talented biker and musician – also sadly another victim of cancer our club has to mourn.

Changes were remade, routes planned and then another brother gets rushed into hospital for a life saving operation....no bikes for several months...more changes...but thankfully a much prayed for recovery.

Now some two years later we finally embark on Fiddly's run, three of our original members unable to ride due to unavoidable work and family pressures, but new fledgling members were brave enough to sign up.

Lost in France 2016 is upon us. A strange coincidence the memorial run begins on what would've been Fiddly's 40th wedding anniversary. His spirit will ride with us I'm sure.

The morning of the run dawns, cold, wet and miserable. Wetter than Badgers Bimble even, the forecast for our jaunt south dreadful weather wise, but Ho hum, we are bikers, riding all year round in all weathers, so a little rain won't put us off.

An early morning phone call, Rocky's Harley has died, can we delay meeting for an hour or so? No probs – the weather may turn before we launch down the M6, converging from five different parts of the country to blast towards the Portsmouth ferry this evening for an overnight sailing.

The rain gods however never got the memo.....I load the Triumph up, check I've remembered my passport for the umpteenth time, and suit up – encased in plastic, leather and gortex I kissed the wife and kids goodbye and set off into the rain on the first of a planned three thousand miles.

The weather picked up for an hour or so down the M3, then the gods turned nasty, really nasty. As we lost daylight the heavens opened again. Flooded motorway all the way down to Portsmouth. Stopping to refuel before the ferry to avoid the usual morning carnage in Caen petrol stations as the ferry dumped those with empty tanks would give us a two hundred mile head start.

Rain continued to batter us as we booked in and showed our dripping passports. Dozens of soggy riders waiting to embark, draping gloves, scarves and bags over the bikes, using their hot engines in a futile attempt to get dry. Steam scented with wet leather filled the air as we thankfully boarded early, there seemed to be less vehicles coming to England than leaving, we carefully rolled onto the slippy decks. Bikes strapped in, we set off for the bar to raise a glass in honour of Fiddly.

Surprisingly the atmosphere onboard was rather jolly after the complete soaking. We enjoyed one drink, sitting at a dimly lit table before trying to get some sleep on the overnight crossing – personally I already knew it was a futile gesture, a combination of excitement, nervousness and slight hodophobic grumblings would keep me awake 'til dawn said bonjour!

The same bar for morning coffee and croissant, I notice that directly behind our chairs of the previous dimly lit evening there is a glass display case. One item on view. We raised another caffeine salute before turning our backs on the gleaming fiddle we had totally failed to notice last night. The omens were good for the run! 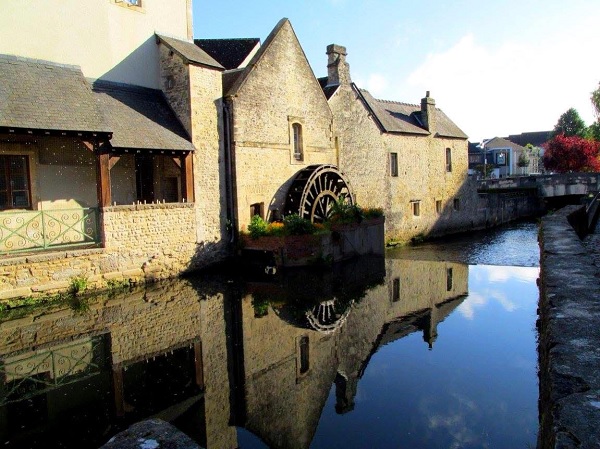 Bleary eyed and yawning we set wheels on French soil, a quick repacking and balancing of the bikes and then a short jaunt through misty morning scenery to Bayeux. French gods are much nicer than ours and within twenty minutes the sun was up, mist burnt off and a beautiful day welcomed us into a beautiful town. Hardly any traffic was another bonus, but it was still very early and the roads would probably be a lot busier after breakfast. I was not looking forward to sitting in traffic – filtering (riding between rows of stationary traffic in a jam) is apparently illegal on motorcycles, so fingers crossed we could avoid rush hour, staying in this gorgeous town before running up to see the D-Day beaches , memorials and museums of Normandy.

I was relieved my camera was still dry as I retrieved it from thankfully multilayered plastic wrapping and began snapping away. We found an open cafe and hungrily devoured pastries and coffee. We ignored the television in the corner (politicians ranting over something or other as the backdrop footage of French unions marched on, banners proclaiming their latest grievance with the government) and settled down to study the map and plan any last minute route changes now we had sunshine and could dawdle, a Bimble through some little villages before hitting the main sights.

We sadly never got to see the Bayeux Tapestry, by the time we'd feasted, wandered through the town...and again what a beautiful spot it was...the hordes of tourists were awake and coach upon coach of school kids, American seniors and Japanese sightseers had arrived, the queue was too vast to think of joining if we wanted to do all we had planned and then detour back a few hundred miles to our first overnight spot in Pontorson.

As we hit the quiet roads we relaxed into that groove that riders who travel huge distances hit. I never feel more alive than when I ride. The sense of freedom I just don't get on four wheels.

Alert, aware, enjoying the effortless, constantly shifting presence of my club – confident of their machines and my brother riders' capabilities and positions in the convoy. Enjoying the scenery but slightly saddened at the seemingly endless amounts of small garages that were closed down by the roadsides, scrawled messages on cardboard signs presumably lamenting failed businesses on such quiet roads. VIDE was written everywhere – some kind of French transport department maybe? Bankruptcy sale? Who knew?

Thoughts of refuelling a hundred miles later didn't worry me as we would be on the main roads by then. I sat back and enjoyed the ride, the Triumph rumbling contentedly as mile after mile of gorgeously empty roads were gratefully consumed.

Obviously a very short time later we were hopelessly lost. The Run had been so named because we knew with certainty that despite meticulous military planning of our own Normandy landings (the rider of the German machine and owner of many many maps, marker pens and gps devices has since been rechristened Rommel!) we would venture way off route to poke our headlights into some out of the way village and end up miles away from where we should've been.

Hence the Normandy beaches were never seen on that first day. Low fuel forced us to find big roads, big roads showed more of the handwritten signage, more closed petrol stations....worry began to set in as cars abandoned by roadsides became a popular obstacle....eventually an open gas station, admittedly the queue was huge but we filled up gratefully (most companies had a twenty litre or twenty euro limit and no jerrycans rule that didn't please car drivers but was more than enough to fill the Triumphs grumblingly empty tank), our very limited French failed to uncover just how bad the fuel crisis had hit the country, maybe it was just a local delivery problem causing the shortages?

We were to ride obliviously into a country that was on the verge of total standstill that day, route changed to enable us a quicker (based on agonisingly slow rural French speed limits) Bimble to our first overnighter.

I still could not help but enjoy the marvellous and marvellously empty roads that first day.
I called home and was assured there was nothing at all on tv about a European fuel shortage, no terrorist attacks on refineries, no military coups by Gallic loonies....not even a zombie apocalypse! Must be local, behind us in a few hundred K.

We unpacked the bikes, showered changed and feeling refreshed we walked into the small town for a drink and some food...after all this was the culinary capital of the world.....erm, maybe if any of the restaurants and bars were actually erm....open.....?

We walked down the deserted Main Street, a few small scooters and bicycles the only traffic in evidence. Stopping at the one supermarket that we found open, we stocked up on bread, wine, ham , cheese and water. A picnic supper before bed. Delicious it was too. A fortunate discovery of an out of the way small bar full of locals finally drew us in and we began to get the idea.

No petrol. Anywhere. No cars. No busses. Trains and ferries affected. Businesses unable to open. Talk of the national supplies running out totally over the next few days. Riot police and army on standby. TV full of images of riots, pickets and demonstrations. Blockades burned as the camera panned to tear gas and rubber bullets. We found out through a mixture of Frenglish, red wine and mime what those scribbled signs meant too.

I added one word to my schoolboy vocabulary. A word that we would come to dread as our iron horses became thirstier.... 'VIDE' means empty.

And two and a half thousand miles to go.