Bluebottle goes off to see this week's largest cruise ship in the world, sees a sweet sinking of the Titanic and remembers the Battle of Jutland. 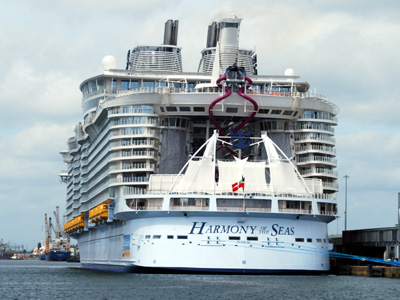 Live Together in Perfect Harmony

I work in Southampton, a city that's been Europe's premiere cruise port ever since Titanic set sail on her maiden voyage from here. Every few months a new cruise ship is officially named here and sent off on her maiden voyage, normally accompanied by a free firework display. Among the shipping companies that use the port are Carnival (Cunard and P&O) and Royal Caribbean.

So one lunchtime I decided to walk down to Southampton's Mayflower Park, named after a boat that left here to go to America in 1620. From Mayflower Park you always get a good view of the large cruise ship's sterns, which is normally a bit dull but unfortunately the docks are restricted. The alternative is a view behind the railings from Leisure World, but the view's normally quite restricted. Still, from the stern I got a good view of the twin snaking Ultimate Abyss waterslides.

Facilities include numerous pools as well as a waterpark, a separate pool with 'flowrider' wave machines for surfing, and at the back is a 100-foot twin-slide called 'The Ultimate Abyss', which drops riders down ten decks. Yes, even the waterslides are longer than the Mayflower. That's 400 years progress. But if the Pilgrim Fathers and Mothers were travelling on-board today, they could show off their bikini bodies in an 'AquaTheatre', whirlpools and the solarium, while enjoying the sports courts for football, volleyball and basketball, nine-hole golf course, park with 40 trees 20-feet tall and 12,000 other plants in the area called 'Central Park', a zip-wire, climbing walls, an ice-rink, a huge 1,380-seat theatre with its own show as well as numerous restaurants, cafes and Bars (including one with a robot bartender).

It left Southampton on 21st May for a quick press trip to the Netherlands with a few test passengers1 before returning to Southampton in time to embark on its official Maiden Voyage to the Mediterranean on the 29th May.

Still, the Harmony of the Seas leads us onto a ship that would look like a microscopic minnow in comparison, the RMS Titanic. After seeing the Harmony of the Seas I attended my five-year-old daughter's school play on the sinking of the RMS Titanic. It was very cute, although I'm not sure how sweet the sinking of the Titanic is meant to be. Do you know that very famous song, The big ship sailed down the mumble-something-mumble2? The song that's set on either the first day of September, or is it the last day of December?3 It's set around the end of the year somewhen anyway. Well, my daughter's school play involved singing that very song, but fortunately the words were changed to ones that it is actually possible to remember. Verses included,

The Titanic hitting the iceberg was recreated with a cardboard Titanic prop being carried across the stage, accompanied by the sound of a shaking tambourine, which was loudly banged when the prop collided with the cardboard iceberg. This, I thought, worked very well, even though the Quilley School in Eastleigh had chosen to go one better by constructing an eighth-scale replica Titanic, using riveting and hot bending techniques.

My daughter played the part of the newspaper, which as is obvious is the pivotal, starring role of the entire production. After all, 1912 was long before the creation of the internet, even before the BBC and so people outside Southampton only learnt about the sinking of the Titanic through reading about it in newspapers.

After a recreation of the sinking of the Titanic, that took place in April 1912, I cannot help but consider events of exactly a century ago, the Battle of Jutland. This, which took place on 31 May – 1 June 1916, was the largest naval battle of the Great War between 151 ships of the Royal Navy's Grand Fleet and 99 ships of Imperial German Navy's High Seas Fleet, resulted in a Pyrrhic victory for the Royal Navy. My great-grandfather was there, as chief stoker on board armoured cruiser HMS Cochrane which was part of the 2nd Cruiser Squadron. Fortunately the 2nd Cruiser Squadron stayed at the back, which is very good because of the 14 British ships sunk in the battle, two were Cochrane's sisterships: HMS Black Prince which sank with all hands killed, and HMS Warrior, with the majority surviving4. I cannot help but feel the chances of survival for a stoker, chief or otherwise, on a sinking ship were not high.

In conclusion, then, nothing I can say would compare to the words of the old navy hymn that I ask you to consider;

Eternal Father, strong to save

Whose arm has bound the restless wave

Who bids the mighty ocean deep

Its own appointed limits keep

O hear us when we cry to Thee

For those in Peril on the sea.

Peril on the Sea presumably going to be Harmony of the Seas' next sistership.

1This was a bit of a disaster when it was reported that the ship was an unsafe building site, with the top deck children's play area not even having a safety barrier installed yet.2Usually 'Alley Alley Oh', even though a big ship, such as the Harmony of the Seas, wouldn't fit down a motorway, let alone a dark, narrow, twisty alley. 'Oh' indeed. Although some say 'Alley' is a nickname for 'Atlantic'.3It definitely isn't I saw three ships come sailing in on Christmas Day in the morning, which for some reason is a Christmas carol even though Bethlehem isn't actually a port.4There were six ships in the class: HMS Duke of Edinburgh and HMS Black Prince, after which the design was modified and the following four ships, HMS Warrior, HMS Cochrane, HMS Achilles and HMS Natal are sometimes considered to be in a different class to the first two.