Tina and the Glass Horses 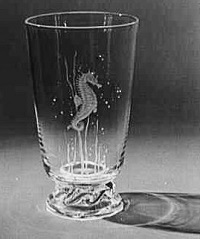 I adored my grandmother, my mother's mother. She was very charismatic and completely outrageous. This of course was a delight for me and my two brothers. We learned everything a kid could want to know, from how to tell a convincing white lie to getting tipsy at lunchtime because her sherry trifle had half the bottle in it.

Ah yes, we were fortunate to be able to spend a good deal of our childhood with her, as she only lived up the road.

My gran had many friends, people from all walks of life were drawn to her like bees to a honeypot.


There was Bunty who lived in an old house with turrets in a nearby village, who regularly saw spaceships hovering over the neighbourhood.

My gran would visit Bunty for tea, and be quite undaunted by the possibility of extraterrestrial visitors joining the party. She'd have greeted them cordially, had they walked into the room, and asked them questions about their lives – had they had any success on the horses, perhaps, (because she did enjoy a flutter herself), or did they have enough to eat in outer space?

And then there was Aunty Tina, who lived in a cottage beside a stream. We called her Aunty, I don't know why. Aunty Tina collected tiny glass animals, especially horses. It seemed to me that she had hundreds of them, which she kept in a glass fronted cabinet, but I was allowed to take them out. I don't remember the other animals, but I do remember the horses, these beautiful miniature creatures in clear and coloured glass, and I would hold them up to the light and gaze in wonder.

I didn't know much about Tina. In retrospect, I think she might have been a medium, because I once heard her say to my gran that Mrs. Wilkinson had been in touch. I remember this very distinctly, my gran half closing her eyes in that funny way that she did, and talking in a significant whisper that was completely unconvincing, but deeply heartfelt.

All this was years ago, of course, way back in the 1960s. My gran, and Bunty and Aunty Tina are long gone, they've joined Mrs. Wilkinson on the Other Side, if there is an Other Side. I think my gran might be skeptical about this, but her warmth of spirit is never far away.

Perhaps she's asking Mrs Wilkinson if she's had any luck on the horses, and Tina is remembering the light shining through the window of her cottage, illuminating her tiny glass creatures which are now galloping through the galaxies of dream, while Bunty smiles knowingly.