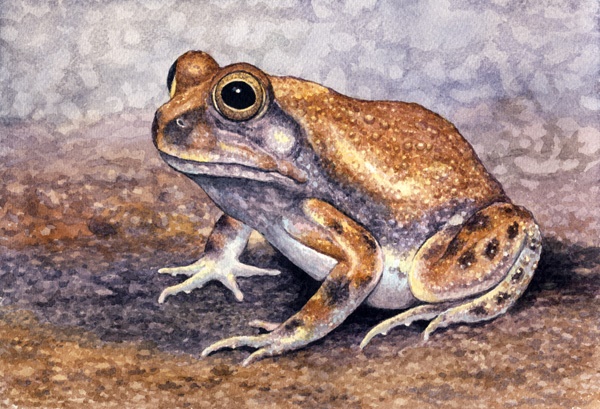 A short article this time, about a short critter! This is a Russet-backed Sand Frog, Tomopterna marmorata. Sand frogs are short-bodied, squat little frogs, somewhat toad-like. Indeed, the russet-backed sand frog might be mistaken for an African Red Toad. It is much smaller, though, with a somewhat different shape and proportionally larger eyes. Sand frogs are close relatives of Giant Bullfrogs.


The sand frogs form a small but distinctive genus of African frogs, containing about fifteen known species. They're all much alike, the russet-backed being the most distinctive with its reddish-brown back and less prominent round, glandular 'warts' on its body than the others have. In shape and size it is typical, reaching 5 cm/2" in body length, with comparatively short and weak hind legs. It moves by a series of short hops.


But sand frogs are not much seen. They spend most of the time hidden underground. They prefer areas with sandy soil, in which they can easily dig. They have a special ridge on each hind foot, like a built-in spade, which they use for digging. They make themselves little chambers underground, where they spend most of the year in a state of torpor. They emerge during the wet season, often while it is raining, to feed, find mates and to breed.


The russet-backed sand frog breeds mostly on large savannah rivers. These rivers aren't favourite breeding sites for frogs, since they often come down in a powerful flood during the rainy season, washing frog eggs and tadpoles away, perhaps even into the sea! But russet-backed sand frogs take them on. They seek out sand banks and regions with exposed rocks in the riverbeds. From the banks they give their rapid, piping calls. Females seek out males and go into amplexus, the male clasping her underneath her armpits. The couple seek out a calm stretch of river, a pool or a section of backwater off the main course of the river, where flooding is less likely. She lays her eggs and the male fertilizes them. Development is rapid and the tadpoles soon turn to little frogs that leap away to feed during the brief season remaining, and eventually to bury themselves in the sandy banks as well, awaiting the next rainy season and their own chance to breed.