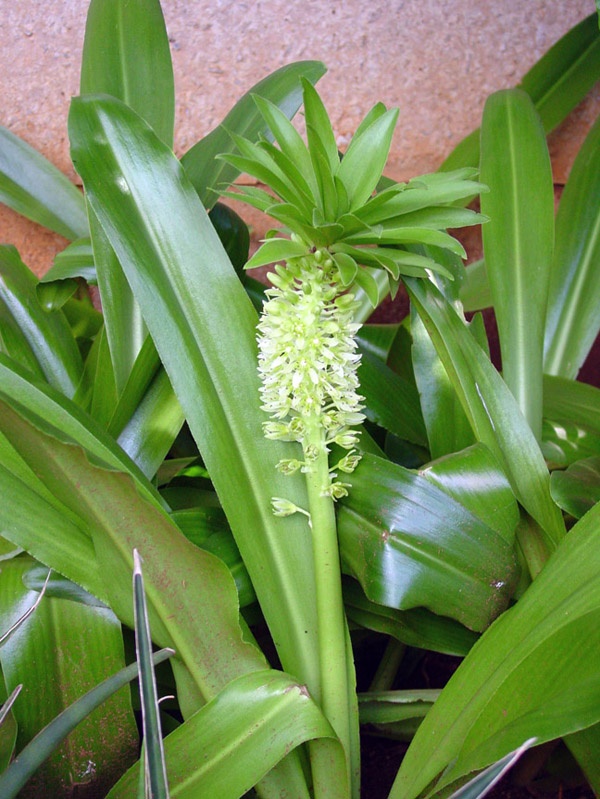 This week I bring you an unassuming but very interesting plant. This is the Pineapple Lily, Eucomis autumnalis. These are no relatives of real pineapples (members of the Bromeliad family, occurring mainly in South America), actually belonging to the Hyacinth family (a wonderfully diverse family here in South Africa). They have lily-like rosettes of soft, shiny leaves that can grow quite broad, with straight to undulating margins. These rosettes in themselves can be quite luxuriant and attractive. The main attraction of the pineapple lily is its inflorescence. It emerges in spring or summer and can persist for quite a while on the plant. This inflorescence is extremely reminiscent of a pineapple! It has a tuft of leaves, like a second rosette, at the top. Below this rosette is the thick peduncle or stalk of the inflorescence. Around this, the buds and flowers are arranged, pressed densely together, looking like the body of the pineapple. You can see the pineapple-like appearance especially in the photo of my father's hand pressing the leaves aside to reveal the flowers opening at the bottom of the inflorescence.


That photo, and other one showing the plant 'in the wild', was taken in the Suikerbosrand Nature Reserve which is close to Heidelberg (one of many towns of that name in the world, this one being in the Gauteng province in South Africa). There the plants grow in the open amidst grassland; they are short and stout. The other photo is taken in my garden, where the plants grow in light shade and receive ample water throughout the growing season. There, the leaves and the inflorescences grow much larger and longer. The plants easily stand half a metre/yard tall. The pineapple-like shape is still there, but much elongated. 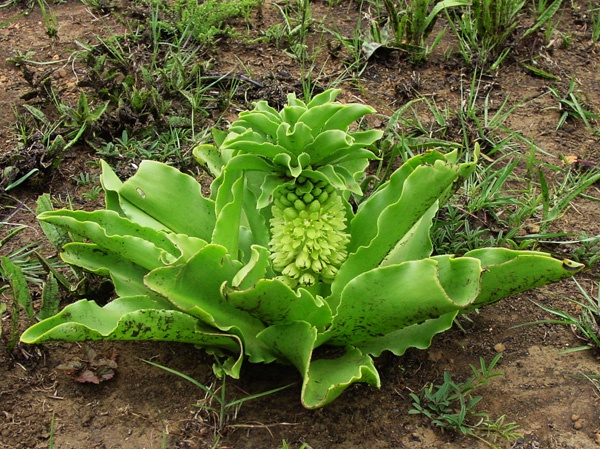 The scientific genus name, Eucomis, is Greek for 'beautiful/good hair'. This alludes to the tuft of leaves at the top of the inflorescence, as if it was a head of luxuriant green hair! The species name, autumnalis, means 'of the autumn', referring to the inflorescences which remain fresh and green-looking late into the summer and occasionally the autumn.


This pineapple lily is widespread in South Africa, growing from the Eastern Cape province northward, and extending to our neighbour countries of Botswana and Zimbabwe, and as far as Malawi. Pineapple lilies are usually found in open grassland or lightly wooded savannah. They also occur in mountainous places and on the margins of forests. Since they bear their distinctive inflorescences for much of the growing season, they are rather easy to identify. In the winter, the plants die back, leaving the subterranean bulbs to produce new rosettes come the next spring.


There are about eleven recognized species of pineapple lily or Eucomis; this is the most widespread one. The others are all very pretty and some grow quite huge, reaching over a metre/yard tall when in flower. They are found all over South Africa except for the very driest places, and as I've said in a few countries further to the north as well, but they are most diverse right here. The different species differ in details of their leaf rosettes, some having beautiful colours and markings, and on the size and structure of their flowerheads.

A few traditional medicinal uses of pineapple lilies have been recorded. The bulbs themselves are poisonous, but decoctions of them are used to treat such unsavory conditions as hangovers, syphilis, urinary problems and flatulence! They're also used for speeding up healing of wounds and fractures, to soothe aches, fevers and colic, and facilitating childbirth. Scientifically, they've been found to contain chemicals that combat inflammation and muscle spasms. 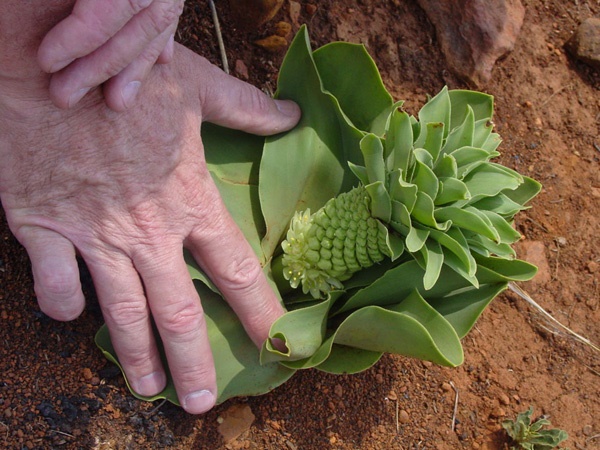 These bulbous plants are easy to grow. They germinate reliably from the round, black seeds. Sow these in well-draining soil at the start of spring, and keep them moist. Use deep containers (at least 10 cm/4") so that the plants can quickly form their deep bulbs. These bulbs can also be used for propagation. This is slower than growing plants from seed, but the bulbs do slowly produce offset bulbs, which can be removed (best done during the dormant period in Winter) and then planted out in Spring. Keep them cool and dry until planting them.


It is best to plant pineapple lilies in groups. They can be planted in light shade or full sun, but give better displays in open conditions. They enjoy ample water and regular application of compost. In well-draining soil the bulbs will survive even if receiving water in winter, but if kept too wet, might rot. They can at any rate comfortably survive a total winter drought, to sprout again in spring as soon as there's water available. They can also survive quite cold winters, with temperatures as low as -7°Celsius/20°Fahrenheit, in bulb form. Survival improves if there is a layer of mulch over the bulbs, and if they are dry during the coldest part of winter. All in all, pineapples are easy and forgiving garden plants needing little care, and deserving much wider appreciation and propagation.