Hoovooloo has completed a rather awesome challenge. He's
written a book about it and Sol has the review 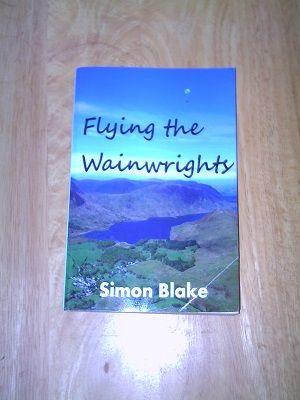 I don't know about the rest of you, but when I first heard about Hoovooloo’s book, Flying the Wainwrights, I thought rather mildly to myself, oh yeah, jumping off all the Wainwrights. In a paraglider thingy. In a year. Cool. Good job!

And then I actually read the book. In a matter of pages I was mentally apologising to Hoo for wildly underestimating what an AWESOME feat he had managed to accomplish, and this feeling had not diminished in any way by the time I had finished reading. I am still, in fact, in AWE.

It’s not that Hoo spends time marvelling at the sheer AWESOMENESS of what he did, mark you. It was more the actually fairly casual reference to the complexity of the spreadsheet he devised to help him decide which mountains to tackle in which order (not actually included in the book, don’t worry) and his estimate of just how much time he was going to have to devote to the project.

It helps that the entire book is very readable. Obviously someone who is an enthusiast, or at least somewhat more into their extreme sports than I am, is going to get more out of it, but being a paraglider certainly isn’t a necessary condition for enjoying the book. Hoo does not overburden us with jargon and the one lengthy technical discussion he does engage in he warns us to skip if we feel like it in advance of plunging into it. I did wonder if a couple of diagrams or pictures of the different paraglidiers used and a few words about each one might be a good idea somewhere at the beginning, but to be honest, personally I much preferred just picking it up as I went along.

Most of the book is taken up by describing exactly how Hoovooloo ticked off each mountain. Luckily, it's not just a dry list of flights undertaken in this or that weather conditions. Some of them have their genuinely hair raising moments or are just outright impressive. However,
I also found it interesting how you can clearly chart Hoo’s progress as a paraglider and so the flights get more and more challenging as the book goes on, which obviously helps to hold the reader’s interest. But Hoo does a good job of finding something interesting or entertaining, no matter how small, to write about each one as well and he also includes just enough personal colour, and has just enough of a supporting cast, to humanise the project, make you feel invested in his triumphs and disasters, and get you to sympathise with his changing emotions towards the whole idea.

He also gets into a fight via email with someone about half way through. I am sure all of h2g2 will share with me the snort of laughter at the sheer inevitability of this I indulged in when we reached that part, although I also found that it did take away a teensy bit of the joy in the AWESOMENESS of what was going on.

Not that much though. It's still AWESOME.