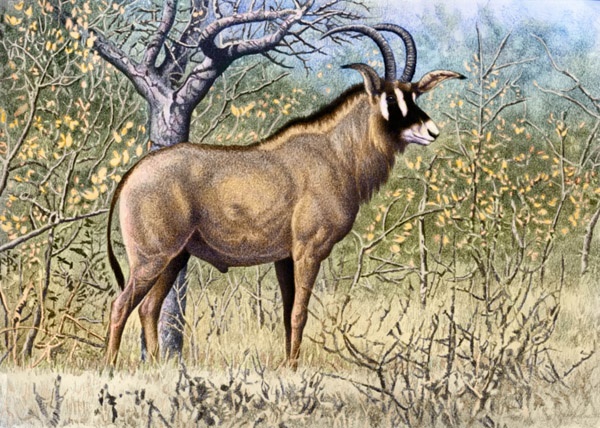 The Roan Antelope, Hippotragus equinus, is one of Africa's largest antelopes. It can stand up to 145 cm/4'10" at the shoulder, and reach a bodyweight of 300 kg/660 lbs. It is one of the horse-antelopes, comprising the tribe Hippotragini, and its scientific name means 'Horse-like Horse Goat'. All the horse-antelopes have rather horse-like faces and proportions. They even have a horse-like mane of hair on their necks and shoulders. They are real antelopes, however, closely related to other African antelopes and gazelles.


Today the roan's closest relative is the Sable Antelope, Hippotragus niger. This spectacular antelope differs from the roan in having longer, more curved horns. Roan antelope horns reach at most 1 m/39" in length, but sable horns can be half again as long, on an antelope that is somewhat smaller in body. The sable bull is bold black and white, but the cows are a duller reddish brown and can be confused with roans except for their longer horns. Young sable antelopes with not fully grown horns are much smaller than roans and usually accompanied by adult sable antelopes. Adult roans not only have manes on the back of their necks, but also shaggy, beard-like hair underneath their throats. The roan's coat is overall very coarse, while the sable's coat always appears short and sleek. Lastly, the roan has another distinctive feature. It has exceptionally long ears, with black tassels at their tips.

Roans are among the most widespread of antelopes in Africa, being found in woodland and savannah regions south of the Sahara. They are nowhere common, though, and are rarely seen. They often occur in small groups, but never in huge herds like zebras and wildebeests do. They, too, are primarily grazers. They seem to be rather finicky in their tastes, preferring grass that's fairly tall, but not too tall (some grasses in Africa can grow to 4m/13' in height). They browse shrubs on occasion, and will eat the nutritious pods of thorn trees. They will move around to some degree depending on rains, moving from dry regions to moister ones. While they need grass for food, they also need trees for shelter, especially to provide shade. The tropical regions they inhabit can get extremely hot at mid-day, even in winter, and roans feed in the cooler hours, resting over mid-day. They still want their environment to be open, and will avoid regions with dense tree or shrub growth. They are dependent on access to drinking water.


The biggest factor in the roan's rarity is that it's not a good competitor. Roans are mostly found where, for one reason or another, there's a scarcity of other antelopes. Where zebras or wildebeests, for instance, occur at high densities, they graze the grass down too short for roans. To a lesser degree, roans also avoid areas where there are predators, although as big as they are, they can defend themselves successfully even against lions. But roans simply seem to prefer a quiet neighborhood.


Roans are moderately social antelopes. They usually occur in herds of 12 to 25 animals, but larger groups, up to 80, might congregate for short periods. Typical roan herds consist of a dominant bull, several adult cows, and their offspring. They don't aggressively defend territories, but such herds usually move around in what is called a zone of activity which can be up to 100 square kilometres/40 square miles. Within these zones other roans are tolerated, except bulls that come too close to the adult cows. The dominant bull will then chase these off. Usually he can do this merely by a threatening pose, arching his neck and sticking his long ears out straight to the sides. The intruding bulls will then lower their heads in submission and move off. Fighting is rare, but roans can spar ferociously. The bulls will face each other, dropping down on their 'knees' (actually the wrists of their forelegs) and battle with their horns and shove each other around. Injuries can happen to the face and neck, but death is rare.


Actually both bull and cow roans in the herd will attack trees, shrubs, and even grass and soil with their horns! This leaves marks of damage over their ranges. Along with urine, dung and the scent from glands between their hooves, which they leave wherever they walk, these indicate their presence to other roans.


The dominant bull not only defends the cows from other bulls, but also ensures its favourite cows access to the best feeding and resting sites in the region.

There is no specific breeding season – roans can breed and give birth at any time of the year. After mating, the cow will give birth to a single calf, which she hides carefully in a bush or thicket. She nurses it in the morning, goes out to feed and returns to it in the evening. When she approaches it, she may call to it. She will lick her calf as clean as possible, to minimize any odours from it which might attract predators.


The calf stays hidden and nurses from its mom for 2 months. Then it starts to accompany the herd. It is very playful and will caper and leap about with the other youngsters. It is weaned at about 6 months old. The baby roan is a reddish brown colour, quite different from the adults. It already has the black and white facial pattern. Its horns emerge at the age of about 40 days. At first they are straight and smooth. At one year, the ridges start to develop, and at four years, the horns start curving backward.


While young cows remain with the herd, young bulls are chased away at the age of about 2 years old. They form bachelor herds, but these are only for young bulls … bulls reaching the age of five or six are chased out of these, too, and become solitary. They may finally manage to attract cows and form herds of their own.


As I've said, roans are rare and vulnerable in many regions. They need either large ranges, or carefully managed environments, as either bush encroachment or overgrazing can rapidly make any specific region unsuitable to them. In South Africa they are found only in the far north, in the largest game reserves such as the Kruger National Park, and there are specific efforts at breeding them in a number of smaller reserves. Their range has contracted significantly; in the nineteenth century they were found over most of northern South Africa. They are in danger in many other African countries too. Being one of the most magnificent of African antelopes, roans certainly deserve major conservation efforts.