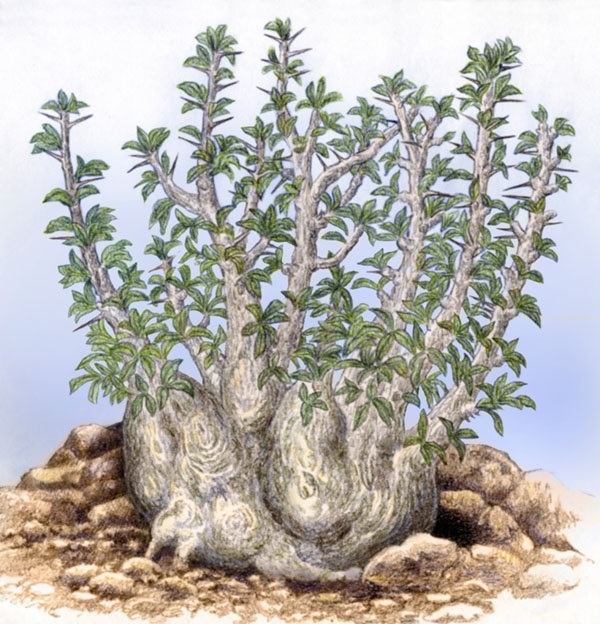 The Kudu Lily, Pachypodium saundersii, is a relative of the Halfmens and, somewhat more distantly, the Impala Lily. Like them, it is a rather succulent, thick-stemmed plant. It is lower but comparatively thicker than the halfmens, reaching 1.5m/5' in height, and 1m/39" in diameter. Its fat trunk has a greenish-grey surface, smooth except for occasional bumps and ridges. The branches are armed with thin, sharp thorns, and the leaves grow in tufts. They're thin, smooth and shiny on their upper surfaces, duller on their lower surfaces, with a hairy fringe around their margin and along the midriff of the bottom surface. The leaves drop in Autumn, leaving the plant leafless for the winter.


The flowers of the kudu lily are very striking. Here you see a photo of the flowers of one of my specimens. They are white tinted with pink, with crinkly margins. They appear in summer at the tips of the branches, covering the shrubs in their delicate beauty. The flowers are pollinated by insects, following which the fruits develop. They grow as paired follicles at the tips of the branches, resembling the horns of antelopes. (These follicles are indeed called 'bokhorings' or 'antelope/goat horns' in Afrikaans.) The follicles split open at a seam on their upper side, releasing the seeds. The seeds are flat and provided with a tuft of long, white hairs at one end. These allow the seeds to be easily blown about by the wind, so managing to be distributed away from the parent plant.


Although called lilies, these are not real lilies or anything close to them. Lilies are monocots, plants with one seed leaf, while kudu lilies are dicots, having two seed leaves – an entirely different branch of the plant kingdom. They belong to the Oleander Family, the Apocynaceae, a family that is very diverse in tropical regions, and which includes many interesting trees, shrubs, climbers and herbs in South Africa. Apart from its close relative the Halfmens, there are three more members of Pachypodium in Southern Africa. The genus is best represented on Madagascar, where there are about twenty different species, ranging from small, low succulents, to decent-sized trees. In South Africa, the kudu lily occurs in the warmer, drier parts of the summer rainfall region, which is the northeast. It grows in rocky places most of the time, often on the hot northern faces of hills and mountain slopes. It occasionally grows on open, flat ground. It is not very abundant in the wild, but quite common in cultivation. 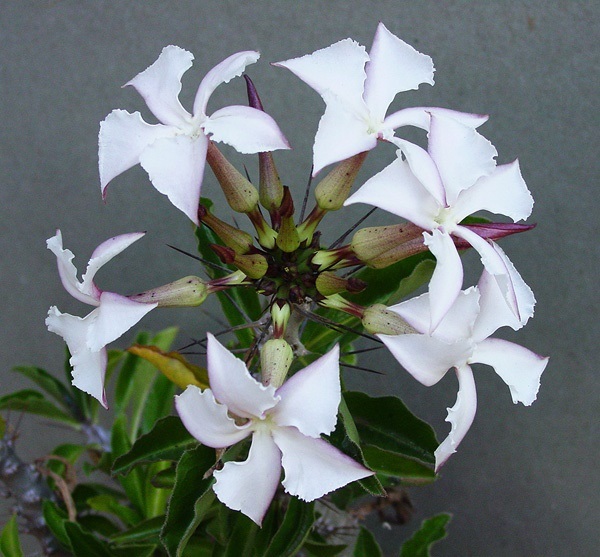 This species is easy to grow from seeds. It can be grown from cuttings too, but that's not a good option. The cuttings strike easily but only fatten slowly, whereas if you grow it from a seed, the fat trunk starts forming right away and thickens up beautifully. And it really is easy. Every adult plant will produce masses of seeds. You only need to check the follicles daily because once they open the seeds can blow away rapidly. But you can catch the follicle just starting to open, and then open it all the way and remove the seeds. Detach the white tufts from them. The flat seeds should be sown in a sandy, well-draining medium, and covered with about 5 mm/0.2" of the same sandy medium. This is best done in early spring, just after the seeds have been released from the pods in fact. Keep the seeds moist, not wet, in a warm but shady place. Fresh seeds should germinate readily in a week or two. The little plants can be kept growing together in the sowing pots, trays or bags for a year or two, and then planted out separately. They transplant very easily. Young plants are sensitive to overwatering and will rot if kept wet. But a plant starting to rot can still be saved: cut off the rotten bit at the bottom and let the plant dry out for two weeks in a shady place. If it is still alive and has formed scar tissue along the cut, plant it again – shallowly – and water it sparingly. It might recover and grow new roots in a month or two.


Once the plants are strong, two or three years old, they can be planted out in the garden. That is, if the climate is suitable. Kudu lilies need warm, sunny, fairly dry conditions. They can handle light shade, but not frost. Given some protection from surrounding plants in a bed, they can survive where frosts are very light. They need to stay completely dry over the winter. Watering can be resumed at the start of spring, when their new leaves emerge. Even during the growing season they should not receive too much water. Still, they can handle more water than some of their other relatives such as Impala lilies or Halfmens plants. In this, they're similar to the Madagascan species. Regular watering, weekly or fortnightly, over the summer will ensure healthy and well-growing plants. Outside favourable climates they can be grown in greenhouses or in sunny spots indoors. If planted in a small pot, they will fit themselves to it. But they look best when allowed to become big! They grow fairly slowly but not as slowly as some other succulents. You'll have a pretty little fat plant in five years, but will need to figure on a few decades for a truly imposing, massive specimen.