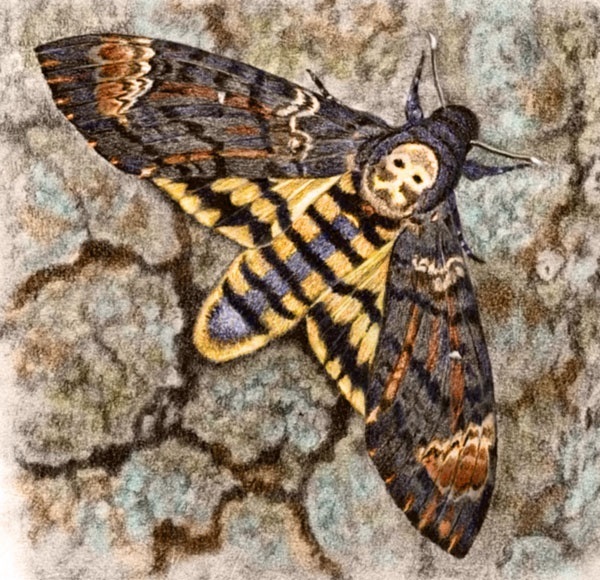 Time for another insect! This is the iconic Death's Head Hawk Moth, Acherontia atropos. The genus name 'Acherontia' refers to Acheron, one of the five rivers that run through Hades in Greek mythology. The species name 'atropos' honours Atropos, 'the Inevitable', one of the three Fates, also from Greek myth. There are two other Death's Head Hawk Moth species, Acherontia lachesis, named for Lachesis, 'the Apportioner', also one of the Fates, and Acherontia styx, named for the river Styx, which in Greek myth runs between Hades and the lands of the living. All in all, ominous names for these little moths!


Actually, this is not so little a moth. The Death's Head Hawk Moth reaches a wingspan of 13 cm/5", and is quite hefty in the body. It is a rather dull brown colour, except for brighter orange-yellow on its inner wings and the sides of its abdomen. Its most intriguing feature is on its thorax: a whitish to brownish shape which very much recalls a simplified 'skull-and-crossbones'-style human skull! There is no way in which this depiction on the moth could be called deliberate … it simply is a bold marking that happens to remind us of a skull. Although this marking has caused these moths to be regarded with dread by humans, and possibly to leave them alone, it would be very far-fetched to consider it an example of mimicry. It is doubtful whether human attitudes to it could play much of a role in its reproductive success and subsequent survival.


But this doesn't mean that the moth doesn't use mimicry at all! Indeed, it does exactly that. These big moths raid beehives, stealing honey from bees! They exude a scent which resembles that of the bees, which enables them to move around in the hives without being molested. But on entering the hives, they are sometimes attacked. Their thick 'skin' protects them and they also have some resistance to bee venom.


There is a somewhat honey bee-like aspect to this moth's appearance, in its black and yellow barred abdomen. But again this is probably a coincidence rather than mimicry. The moth is far too big to be visually mistaken for a bee.


The bright yellow colours may serve a protective function. The upper wings of this moth are dull brownish, providing camouflage as it rests on tree bark. If it is disturbed it flashes its wings outward, exposing the bright yellow underwings as well as the bright bars on the abdomen. This might startle predators. In addition to this, it produces an irritating high-pitched squeaking sound by pushing air through its sucking proboscis. 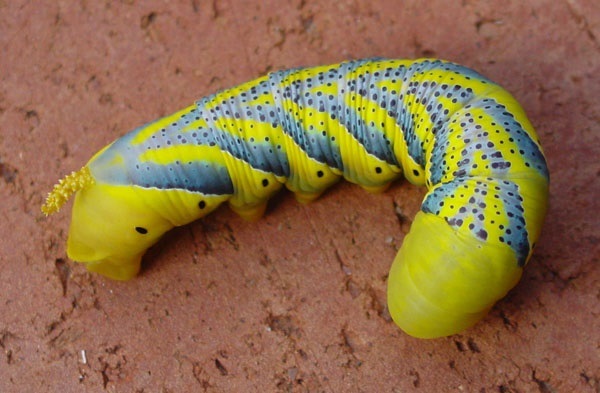 The larvae of these moths are also spectacular. Here you see photos of one that I found in my garden, a caterpillar in the final stage of development. They are very boldly marked, yellow to greenish in the body with bluish 'chevrons' over the back. They reach 13cm/5" in length, and feed on the leaves of a variety of plants, mainly members of the Tomato/Nightshade family, as well as cannabis (no, I don't have that in my garden)!


This hawk moth is very widely distributed. It occurs over the entirety of South Africa, over most of the rest of Africa, southern Europe, and western Asia. In the colder, northern regions it 'overwinters' in the pupa stage. In South Africa, it is found in just about all natural habitats and as you can see has also adapted well to suburban gardens. Here and in other warm regions these moths can produce several generations per year.

Many of you may remember the movie 'The Silence of the Lambs'. These moths featured significantly in the movie. There was also one on the movie poster. But it didn't look exactly right! The skull marking on its back differed from the real thing, looking more like a real skull. But if you look at it closely, you'll see that it isn't a real human skull either. In fact it is a reproduction of a photograph that was the brainchild of surrealist artist Salvador Dalí. It depicts seven naked women arrayed in such a way that their bodies form the shape of a human skull. This of course fits in excellently with the plot of the movie about a serial killer who preys on women for their skins. The moths themselves symbolize the murderer's obsession with transformation.

Hawkmoths are feared in many communities. It is thought that they can sting, especially that the caterpillar can sting through the spiky 'tail' it has at the end of its body. A more superstitious belief is that they bring bad luck, or even death, to houses they visit. These fears are completely unfounded. To humans, these moths and their caterpillars are completely harmless. Both the proboscis of the adult moth as well as the horn at the tip of the larva's tail are too soft to sting with and they have no venom. The caterpillars may bite when handled, but their mandibles cannot penetrate human skin. They also feed on a few agricultural crops, but they never occur in large enough numbers to cause serious damage. The adults are a minor nuisance to beekeepers.