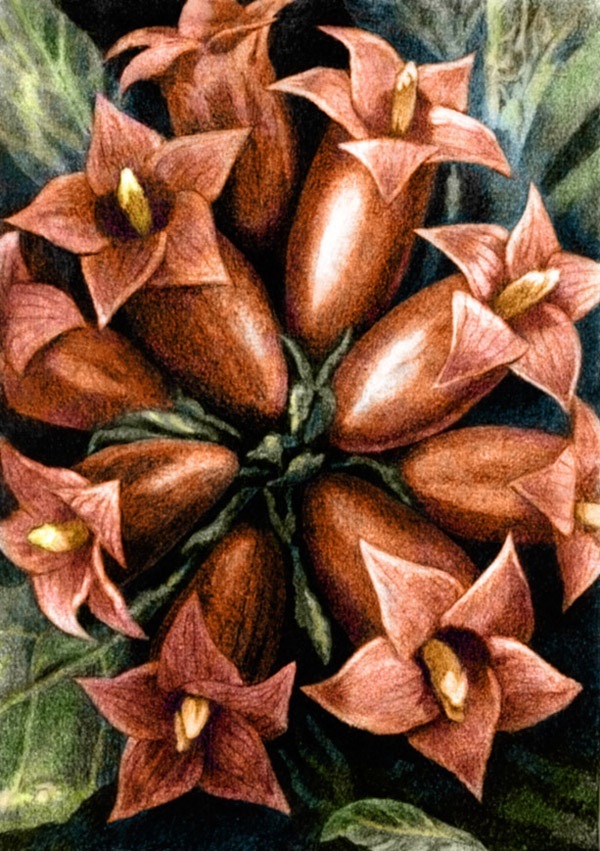 Here we have another beautifully flowering plant, the Wild Pomegranate, Burchellia bubalina. Again, like the Karoo Gold, it is called a pomegranate, but is actually something quite different. It is a member of the Coffee Family, the Rubiaceae, and therefore a relative of the Cape Rothmannia. This is a large family in South Africa, and several species are very difficult to identify. This species, when in flower, is not one of them! Its neat, orange to red, tubular flowers that grow in clusters at the tips of the twigs, are instantly recognizable. They are not very big, reaching about 2.5 cm/1" in length, but produce copious nectar, and are well-beloved by birds. This species is the only member of the genus Burchellia, meaning it is very unique.


This is not a big plant. Most of the time it is a densely leaved shrub, but occasionally grows into a small tree up to 10 m/33' in height. It grows in evergreen forest, sometimes in the understory but also along the edges. It also grows on rocky hills and outcrops in grassland, in which case it is an attractive, spreading shrub or tree. It prefers moist conditions, and is found in the far south and east of South Africa, where mountain ranges catch the rain. It is also present in Swaziland, but mostly it is restricted to South Africa. Its leaves are simple, glossy, rather leathery, and usually about 10-13 cm/4"-5" in length, but reaching 18 cm/7”. The leaves and flowers both give it a resemblance to the real pomegranate, Punica granatum, to which it is only very distantly related. It is evergreen. Its flowering period lasts for several months in spring and early summer. The flowers are pollinated by sunbirds, and grow into small fruits, not very appetizing to humans, but sought after by a variety of fruit-eating birds as well as monkeys and baboons. The lobes of the calyx remain on the fruit, forming large projections for which this tree is sometimes called a ‘Buffelshoring’ (Buffalo horn) in Afrikaans.

In spite of its small size, this tree's wood is used for making huts, furniture and farm tools. Its roots are sometimes dried and worn as an amulet supposedly giving one success in love; an infusion of the roots is used as a body wash and as an emetic. The roots are also used for splints to bind broken legs of animals.

This species is not quite as hardy as most I've been discussing here, but it is still not a difficult one to keep happy in a garden. It is compact and doesn't take up too much room. It does not enjoy extremely hot and dry summers as are found in some of the arid and winter-rainfall regions of South Africa. In such climates, it can be helped by planting it in light shade and giving it plenty of water in the summer. It grows best indeed with plenty of water year-round, and in rich soil. It can only take light frost, but can survive in fairly cold climates if given protection such as sheltering surrounding plants. It is able to grow in full shade, but flowers best if it gets some sun.


The wild pomegranate can be grown from seed or stem tip- and semi-hardwood cuttings. Seed should be removed from the fruit when it had fully dried out: shake the fruit – if it rattles, then it's ready. Plant the seeds in mid-Spring in a rich soil mixture. They take four to six weeks to germinate. These plants grow slowly, so it is best to consider them as decorative shrubs at first. They will start flowering in their second year. They appreciate lots of compost or peat in the soil, and a mulch, frequently renewed, does them well. They typically grow into a compact, neat shape and don't need pruning.