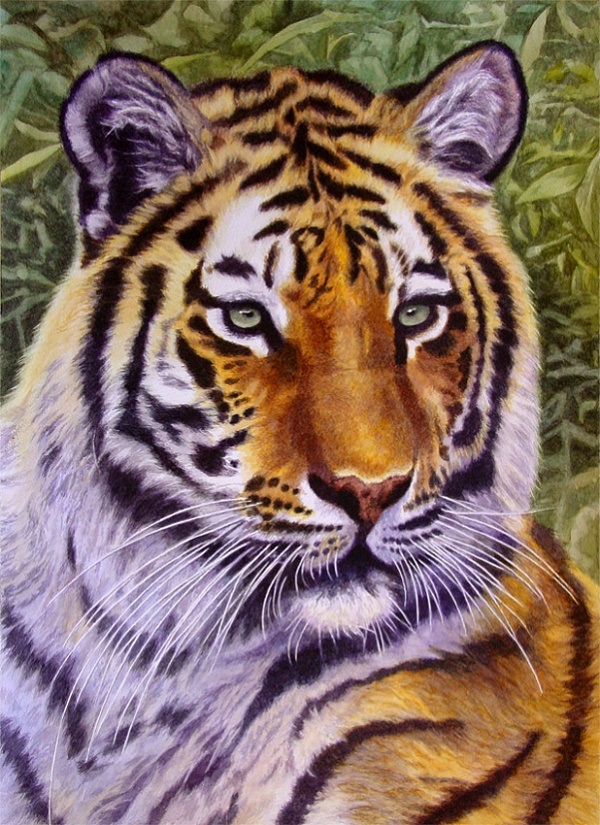 I hope all of you recognize this species! It is of course a tiger, Panthera tigris, probably the most magnificent of all living felines. It is also a specific individual tiger! This is Laila, a Siberian (also called Amur or Manchurian) tiger, Panthera tigris altaica, photographed by a friend of mine in a zoo in The Netherlands. I think this is a pretty decent likeness! But at least I hope all of you will grant that it is a tiger. Tigers share the genus Panthera with lions, leopards and jaguars. Many more species of Panthera used to exist in the past. The oldest direct ancestor of the tiger, Panthera zdanskyi, lived about two million years ago in what is China today. The earliest fossils of true tigers were found in Java and date back to 1.8 million years, making this species quite older than our own (the first truly modern humans dating back a mere 100 000 years or so).


Tigers are the largest of the living felines, some individuals in the wild exceeding 300 kg/660 lbs in weight, and 3.6 m/12' in total length. One tiger in a zoo, having been fed particularly well, made it to well over 400 kg/880 lbs! But tigers vary widely in size, the Siberian subspecies being the largest, and the Sumatran being one of the smallest, males sometimes weighing only 100 kg/220 lbs, and females 75 kg/165 lbs. While the Siberian tiger is extremely shaggy to protect it against the icy cold, the Sumatran and other equatorial subspecies have shorter fur (but the Sumatran male having an impressive 'beard' and mane). The commonest tiger today is the Bengal Tiger, which mostly lives in India. White tigers are not a subspecies, but a mutant form of tiger that occurs only in the Bengal subspecies. It is not really ethical to specifically breed them since they are plagued with debilities caused by inbreeding. Siberian tigers are naturally the lightest in colour, while equatorial tigers can be very dark. Tiger stripe patterns are also variable, some being much darker and more heavily striped than others. This can vary a lot even in tigers of the same subspecies or population. Tiger stripes are not just in the fur but on the skin as well, so if you shave a tiger it is still striped!

For the sake of conservation, tigers in zoos today are bred pure not just to the species, but also to the subspecies. But there have been and continue to be hybrids between tigers and lions, especially in private collections. These, called ligers (mother a tiger, father a lion), or tigons (mother a lion, father a tiger) have coats with sparse stripes and spots, and males sometimes with manes but never as impressively maned as adult male lions. Ligers can become huge, bigger than lions or tigers, some standing 1.3 m/4'4" or more at the shoulder, and weighing more than 450 kg/1000 lbs! This is because a male lion has a growth-producing gene, which is countered by a lioness but not by a tigress. Tigons are smaller, since they do not get the growth-promoting gene. They are mostly around 150 kg/330 lbs. or less.


A cat that loves water

While domestic cats don't generally like getting wet, the tiger is a cat that seems to love water! Especially in hot places like India, tigers will enter rivers and streams to cool off. They swim well and can hunt in the water. Some of their prey such as water buffaloes also frequent rivers and swamps. Tigers sometimes even catch fish! They can swim from island to island in floodplain regions, and their swimming ability may even have helped them colonize the Indonesian islands, from most of which they've sadly been eradicated.

In densely populated countries like India, tigers have earned a reputation as man eaters. Indeed, some tigers do kill humans, and in the Sundarbans swamp region, they do so quite regularly. But most of the time, tigers favour other prey. The danger comes mainly from old or incapacitated tigers. When a tiger loses its ability to hunt its normal prey, and becomes desperate, it might start targeting humans. Humans will retaliate and seldom does a man-eater survive for much longer. But people have devised strategies to protect them against these rogue hunters. One method has been masks worn at the back of the head! A man-eating tiger doesn't like to attack people head-on, instead sneaking up behind them. A person wearing a second face at the back of his or her head, seems to be always facing the tiger! So in confusion it will supposedly refrain from attacking. However the tigers seem to be wising up about this, and attacks continue.

The preferred prey of tigers is big wild game like the aforementioned buffaloes and wild oxen as well as deer, antelopes, tapirs and wild pigs. Tigers will prefer to catch these rather than domestic stock. The tiger uses stealth to sneak up to its intended victim, then leaping at it, grabbing it with its huge claws and biting its throat or the back of its head. It then suffocates it or breaks its neck. The canine teeth of a tiger can reach a length of 9 cm/3.6". There are reports of tigers killing elephants and rhinos, but this must be considered very rare events. They do kill other predators, like wolves, leopards, bears, pythons and even crocodiles. Tigers also occasionally take smaller prey such as monkeys or porcupines. The latter are dangerous to target, since their spines can lodge in the tigers and become infected. Indeed, tigers with spine-injured mouths or paws may just be the ones that turn to man-eating.


On average, only 2 in 100 of a tiger's hunting attempts end in a successful kill. But in such a case, a male tiger can consume as much as 35 kg/77 lbs of meat at a single sitting. This keeps it going for quite a while, a wild tiger sometimes going two weeks between feedings. When a tiger fails to catch its own prey, it might resort to stealing kills from other predators, sometimes other tigers! Tigers will also eat the carcases of animals that died from other causes.

Tigers mate, noisily, over the course of the only three to six days for which the females are receptive. This can happen any time of the year, but is most frequent over the winter of the northern hemisphere. Gestation takes an average of 105 days. The female gives birth in a well-protected shelter to two or three cubs, sometimes only one, occasionally as many as six. They are blind and helpless at birth. The male doesn't help her at all in their rearing. If she loses the cubs, the female can again become receptive and give birth to a new litter in five months. Some males exploit this by killing the cubs of a rival male and mating directly afterwards with the female. Generally the mother protects the cubs very well against most other threats. About half of the cubs die within their first two years of life. A male cub in a litter may emerge as a dominant, going on from there to gain early independence and becoming a leader. The cubs' eyes open at the age of six to fourteen days, and their mother nurses them for three to six months. They then accompany their mother while she hunts and teaches them her skills. At eleven months, they can hunt on their own, and at eighteen months are capable of independence, although they mostly remain with their mother until they are two and a half years old. Sexual maturity comes at the age of three to four for females, and four to five for males.


Huge cats of ages past

Only a few cats have ever lived that were bigger than Siberian tigers. The American lion, Panthera atrox, is one of them, the Cave Lion, Panthera spelaea, another. Both were only slightly larger than modern tigers. There were also a sabre-toothed cat species or two that stood taller at the shoulder, and/or were heavier in total weight.

Tigers used to range through almost the entirety of Asia, but have been eradicated over most of their range and today are an endangered species. Nevertheless, they are very adaptable. Tigers live in various habitats: dense equatorial rainforest, bamboo thicket, reed beds, mangrove forest, dry, open, deciduous forest, savannah and grassland, mountainous terrain, semi-desert scrub, and cold coniferous forest. It is only due to human activity that tigers have become rare. A number of kinds have already gone extinct, such as the Caspian tiger which lived in central Asia, the Bali and the Java tigers. The remaining subspecies are the Bengal, Siberian, Sumatran, Malayan, Indochinese and South China tigers. The South China tiger may be extinct in the wild, while there are only a bit over sixty animals remaining in captivity. Despite their being so heavily persecuted, tigers are incredibly popular mammals, indeed in a poll having been voted the most popular animal of all, even beating out dogs! They feature in many myths and legends, are abundantly portrayed in all media, and are the national animals of Bangladesh, India, Malaysia, Vietnam and South Korea. It will be a very ironic tragedy if this awesome animal becomes extinct. But the surviving subspecies are all being intensively protected. Tiger poaching and hunting in their native habitat cannot be completely eliminated, but there are today many populations of tigers being kept and bred in zoos all over the world. There is a project of re-wilding highly endangered South China tigers on a game ranch here in South Africa. It is not yet clear how successful this initiative will be. Tigers can live to an age of 26 years, in the wild as well as in captivity.