The Flightless Dung Beetles of the Addo Bush 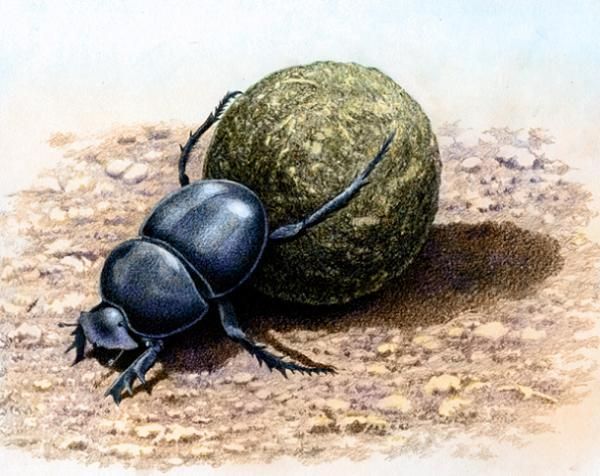 Time for another invertebrate! This little critter is very special. It is one of South Africa's most endangered insects. This is the Flightless Dung Beetle, Circellium bacchus. I've seen this species in 1988 when we were on holiday and visited the Addo Elephant National Park. The beetle occurs in the park and only a few other places.

Dung! Without the tireless efforts of these beetles, South Africa – indeed, most of Africa – would be buried in deep piles of it. This vital work of theirs was highlighted in Australia, when many cattle farms were starting to become massive dung heaps because there weren't native Australian dung beetles who could deal with it all. In the end they imported dung beetles from Africa and Europe for the job. What do dung beetles do with all of that dung? Why, they eat it, of course!


Lest you become too disgusted … the dung of large herbivores here in Africa is not as yucky as some other kinds of excrement. The flightless dung beetles favour the dung of elephants. This is mostly big piles of compacted grass and leaves, often appearing to have passed straight through the elephant without much digestion or alteration. This dung also doesn't smell very bad. It contains much nourishment … indeed, in effect the elephant has simply gathered some nice, munchy stuff for the beetle and deposited it in a big steaming dollop, like a warm, tasty pie.


The most characteristic behaviour of dung beetles is the way they roll the dung into a nice round ball and then roll it around, walking backwards and guiding the dung ball using their long hind legs. The flightless dung beetle will often feed at the site where the dung has been, erm, deposited, but if this is in an unsafe place, exposed to predators or other dangers, the beetle will roll itself a small ball of dung and roll this off to a safer place where it can eat in peace.


The largest, most spectacular dung balls are those used for breeding. While the beetles prefer elephant dung for feeding, they also use buffalo dung for breeding. The male and female beetle meet up at the dung pile, where she rolls a big ball of it. She will then roll it off while the male follows her a few centimetres/inches away. She will seek a favourable spot for burying it. She usually rolls it for a distance between 7 m/23' and 80 m/270'. When she has found the perfect spot, she'll start digging underneath the dung ball. If you look at the picture, you'll see that this dung beetle has a flat, spade-like edge at the front of its head as well as powerful front legs with prongs that project outward. These help them dig. While the female excavates the hole underneath the dung ball, the male will sit on top of it, sinking down with it into the deepening hole. Eventually the hole will go down to a depth of between 17 cm/7" and 37 cm/14.5".


Then the male and female will mate. She will lay just a single egg. The male crawls out of the hole to the surface, but the female remains with the ball of dung. This is vital: fungi will grow on the outer surface of the dungball and smother it if she doesn't keep on nibbling away at it. So she keeps the dung clean (oxymoronic as that may sound) for the young grub that hatches from the egg. The grub will feed on the dung ball until it metamorphoses into an adult dung beetle, the process from egg to adult taking from 120 to 140 days. It will take the young beetle another 50 to 65 days to reach sexual maturity.

This beetle is one of only a few flightless species. It is one of South Africa's largest beetles, reaching 45 mm/almost 2 inches in head-and-body length. It is very heavily built. Nevertheless, its size isn't the reason for its flightlessness – there are several larger and more heavily built beetles that can indeed fly. In this beetle somehow flightlessness seems to be related to its environment. The regions where these beetles live are warm and dry. Insects breathe not with lungs like humans and other vertebrates, but through branching tubes throughout their bodies, called tracheae. These open to the air as small holes called spiracles in the thorax and abdomen. Inevitably, insects lose moisture in their bodies to the air as a result of the gas exchange through their spiracles.


The flightless dung beetle, however, has a unique breathing system. Like other beetles, its upper wings have been transformed into hard, shell-like structures called elytra (singular elytrum or elytron). This is indeed one of the beetles' secrets of success, the hard elytra protecting their vulnerable wings and bodies. While flying beetles can lift the elytra and expand the lower pair of wings from underneath it to fly, in the flightless dung beetle the elytra have fused together and the wings underneath have become useless vestigial stubs. But now there is a hollow cavity underneath the elytra which the wings would have filled had they been normal-sized. Into this cavity, the beetle 'breathes out' … filling it with carbon dioxide-rich and moisture-rich exhaled air. This way the moisture is not lost to the atmosphere, but retained under the elytra, meaning the beetle loses moisture much more slowly, enabling it to survive better in the dry climate.

Unfortunately, with the loss of its flying ability, this beetle has lost the ability to disperse widely. It can still scurry over the ground at a good rate, but is limited by its ability to walk where it wants to go. Beetles are sometimes trapped in ruts in roads or beside roads, and many are crushed by vehicles.


Another factor that causes trouble for this beetle is its dependence on large mammals. Europeans came to South Africa in the middle of the Seventeenth Century, landing in the Cape of Good Hope. They rapidly spread over the southern parts of the continent. They hunted and exterminated game as far as they went. In what is today the Eastern Cape they came upon a dense bush that was almost impenetrable. This was the Addo Bush, a kind of vegetation composed of semi-succulent and thorny trees and shrubs growing in the semi-desert climate. Here the last substantial herds of elephants of the Cape found their final stronghold. A great effort was made to exterminate these elephants as well, but a few survived. They became the nucleus of the herd that later, when people saw sense, became the famed Addo Elephants conserved in the Addo Elephant National Park.


The dung beetles therefore almost didn't make it. If this park was not established, they might have vanished entirely along with the great herds that used to make their home in the Cape. As it is, the park is just a small relict of the range the beetles would have inhabited in the past. But today there are good numbers of elephants and buffaloes in the park, enough at least to keep the beetles in dung for a while. The beetles also utilize the dung of baboons, rabbits, ostriches, antelopes and even humans! Outside the park they are still present in a few other spots. At least today there is awareness of them … in the Addo park there are even road signs warning drivers to watch out for the beetles, and to give them right of way!


There are now many other game reserves and farms in the Cape. There are therefore potentially many regions that could be suitable to the beetles, but because of their flightlessness, they cannot easily get to them, they intervening regions of roads, fences and inhospitable regions like crop farms posing insurmountable barriers. Meanwhile, because each adult female only lays one egg once a year, they multiply very slowly compared to other insects. For this reason, even in ideal circumstances, these beetles will take very long to re-colonize their former range.

Dung beetles diligently rolling their balls of dung are always worthy of notice in wild regions here in South Africa. Humans have observed them doing this for ages, and in ancient Egypt, they have become iconic. The scarab beetle was seen as sacred, the disc of the sun itself being seen as a shining ball of divine dung rolled across the heavens by a cosmic scarab! They also believed the scarab renewed the sun every morning, after having carried it through the otherworld during the night. An ancient belief about dung beetles was that there were no females, and that the male reproduced itself by inserting its semen into the dung ball.

1apologies to the Monty Python gang