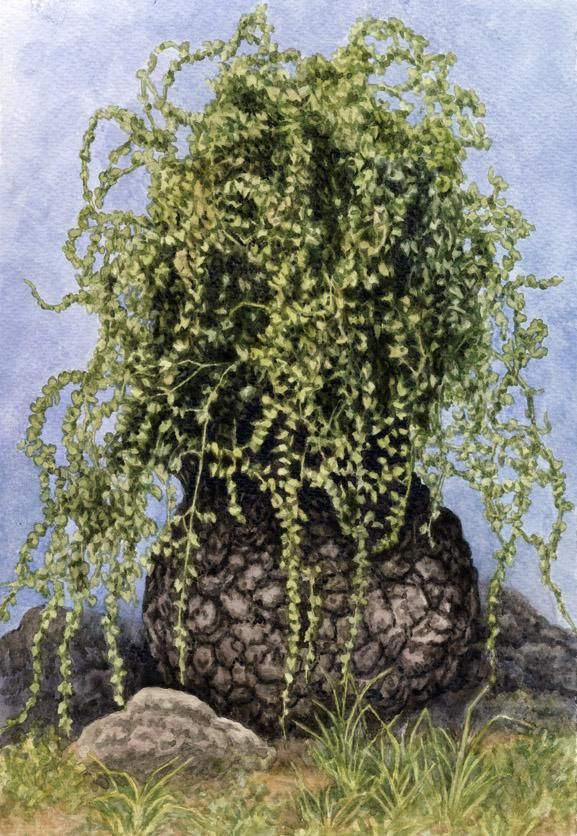 Time for another ultra-weird plant! Dioscorea elephantipes is a relative of the edible yams, which are in the same genus. Do NOT confuse these with sweet potatoes, Ipomoea batatas! The latter also have interesting relatives here in South Africa, but we'll speak about those later. For now, Dioscorea elephantipes : it is also known as elephant's foot, turtle back, and Hottentot's bread. The latter people, now all but vanished, used this in a fashion similar to yams, cooking the enormous tubers for their edible (after poisons have been leached out) starch. This is not done any more, but this and related species are still harvested for medicinal purposes … in some cases this has resulted in the species now being highly endangered. The elephant's foot itself is currently not in immediate danger, but it is rare, too rare in my opinion! The name 'Dioscorea' comes from Dioscorides, an ancient Greek physician, while 'elephantipes' means 'with the foot of an elephant'.


Let us take some time to ponder this plant's weirdness. My painting shows a large specimen. At the bottom it has a huge above-ground tuber, called a caudex. These enlarged basal stems are often called the 'feet' of the plant, hence the scientific name as well as the common name 'elephant's foot'. But there are some other species of plants called the same thing (such as the Spiny Baboon's Poison.) These species are remarkably similar though extremely distantly related. The elephant's foot is a monocot (plants with just a single seed-leaf in the embryo) while baboon's poison plants (and sweet potatoes for that matter) are dicots, having two seed leaves, these being the two main divisions of the flowering plants. But, as in the baboon's poison, the elephant's foot has developed the growth form of a huge basal stem from which thin annual stems bearing leaves arise. The basal stem is a massive store of food in the form of carbohydrates. It can survive long periods of drought. At the onset of the rainy season, the caudex can rapidly send up the tin, twining, leaf-and-flower-bearing stems. These scramble into the surrounding trees and bushes, quickly gaining a height advantage and plenty of sunlight so they can photosynthesize and add even more nutrients to the caudex.


The caudex of the elephant's foot is one of the biggest to be found in the entire plant kingdom! It reaches a height and width of over a meter, and can weigh 400 kg/880 lbs or more. It enlarges rather slowly but the plants can live for very long, perhaps a century or more. You can see here a photo of my three specimens – they are still babies, but the caudices are starting to form. When the plant reaches intermediate size, the surface of the caudex is made up of projecting, thick and corky 'bumps' separated by cracks. These are roughly hexagonal and this makes the caudex resemble the back of a tortoise, leading to yet another name, 'tortoise-back'. The surface knobs are in fact quite hard and serve to protect the valuable food stores inside. As the plant grows bigger still, the surface bumps become more numerous and more irregular. Ultimately the caudex looks like a huge, round boulder. Since these plants frequently grow in rocky places, this might serve as a disguise of sorts. A hiker, stumbling upon one without knowing what it is, might think s/he's looking at a thicket of thin, scrambling plants growing directly from the top of a big rock! 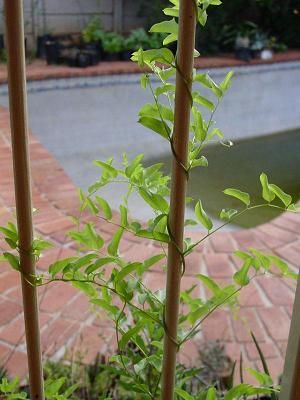 This species naturally occurs just in the very south of South Africa, in the Western and Eastern Cape provinces. It straddles a region from winter to summer rainfall, but is considered to be a winter grower, dormant in the summer. But the ones I have here at home appear to have adapted since they are growing lustily right now, the height of summer! They sprouted right when the hot summer weather began. The twining stems are thin and bear rather delicate, heart-shaped leaves. The stems can reach a length of several meters. In the wild, this species occurs in rather dry, scrubby vegetation. It can handle extreme summer heat, prolonged drought, and winter temperatures a few degrees below freezing. Young plants are more delicate and often start to grow in the shelter of small bushes, but then outgrowing these and toughening up as they become more exposed.


My plants have not yet flowered, but the flowers of Dioscoreas are small, greenish and inconspicuous. They are monoecious, meaning just one sex per flower, and indeed per plant: you therefore need both male and female plants to get fertilization of the flowers. This is performed by bees. The fruit are dry capsules splitting open to release the flat, papery seeds which are scattered by the wind.

While the Hottentots are no longer baking bread from these plants, they are utilized for extracting substances valuable in the pharmaceutical industry. Saponins contained in species of Dioscorea can be converted into steroids used for producing contraceptives and cortisone. Several related Dioscorea species here in South Africa are used for a variety of medicinal purposes. The species Dioscorea strydomiana, only recently discovered, has been pushed to the brink of extinction because of this, only about two hundred plants remaining in the wild. 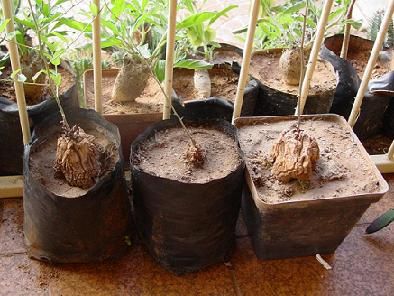 This species is currently grown all over the world by succulent and caudiciform enthusiasts. You might be able to get seeds locally or from the internet. I got mine from Silverhill Seeds. The seeds should be sown in a well-draining, sandy medium with some compost, and covered in a thin layer of sand. The end of summer is a good time for this. Sow them spaced about an inch apart. Keep them moist but not wet. Germination should happen in a few weeks. Keep the plants in the seedling pot or bag for a season, and plant them out the next season. They will soon form noticeable little caudices; these can reach a diameter of 12 cm/5" after five years or so. Plant them in small pots at first, but re-plant them in larger containers when they get too big. You might end up with them in bucket-sized clay pots after a few decades. It is unlikely though that you will have one as big as the biggest ones seen in the wild! Still, eventually they will become very interesting specimens. You can put a wire lattice for the stems to scramble up in the pot; if you're willing to go to trouble you can make this quite decorative. Young plants should get light shade but mature plants do best in sunny spots. Pay attention to watering: do not water this species heavily; wait for the soil to dry out in between waterings. When the leaves die, stop watering and cut the stems back to the caudex. Wait until the caudex sends out fresh new stems before resuming watering. As I said, this is supposed to happen in the winter, but if your elephant's foot plants insist on sprouting out in a different season, don't press the matter – give them the water they need! This species can be grown outdoors only in regions with a similar dry and (presumably) winter-rainfall climate. But in colder, wetter regions, a large specimen might be housed in a special succulent hothouse. Here in South Africa I wish we could launch a massive campaign of cultivating them and planting them in the wild to boost the natural populations! This should pay off after many decades or even centuries, giving many hikers the memorable experience of seeing giant specimens in the bush!