OH, THERE HAS TO BE SOMETHING IN THE STOCKING THAT MAKES A NOISE, said Death. OTHERWISE WHAT IS 4:30AM FOR? 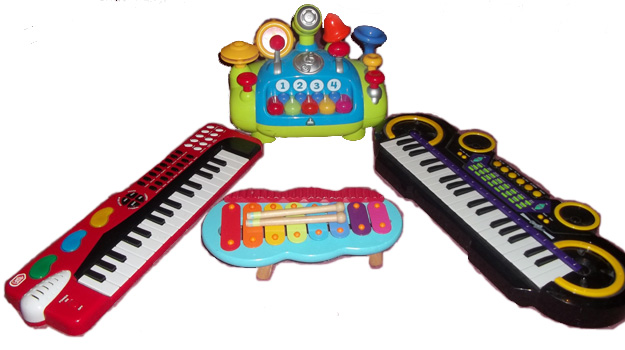 At Christmas, among the most common toddler toys given to young children are xylophones and electric keyboards. These are often chosen in the hope that owning either a xylophone or an electric keyboard will encourage the child to become a musician or at least musically proficient later in life. But which is better?

A xylophone is a musical instrument that consists of a number of different sized metal or wooden strips1. When a beater hits these strips, a pleasing note is produced.

Xylophones have the advantage of being fairly indestructible. An adult can sit on them accidentally, a child can chuck them down the stairs, spill countless drinks over them and it will remain largely unaffected.
Xylophones also do not need batteries. This means that in the long run they save money.

Xylophones can be played quietly. If you wish to have a loud note, hit the xylophone loudly. If you want a quiet note, you simply hit the note softly.
Playing chords is difficult with a xylophone. They often have fewer notes than an electric keyboard, which limits the tunes that can be played.

To play a xylophone, you need to hit it with a beater. Encouraging young children to hit things, and providing them with an implement designed for hitting things with can potentially be a recipe for disaster, especially as the beater can equally be used to hit siblings, grandparents, pets, antiques and anything else that happens to be in the house.

Children instinctively put beaters straight in the mouth, and then long to run around and fall flat on their faces. If the beater is of the Belisha beacon shaped variety rather than a straight stick, ensure that the sphere at the end is not going to come off.

Electric keyboards often, though not always, come with far more notes than a xylophone. They also resemble at first glance the instruments used by professional musicians, such as harpsichords, pianos, keyboards and pipe organs. Skills in learning to play such a keyboard could surely be used on other instruments?

There are some notable differences with true electric keyboards. For instance, they are usually much smaller, with the keys designed for smaller, children's fingers. Yet this first apparent cosmetic alteration is not the only one between a child's keyboard and the real thing.

A child's electric keyboard is first and foremost a toy. Often decorated by more lights than a Christmas tree, their similarity to a real musical instrument is almost the same as the similarity between a snowman and someone dressed up as Father Christmas.

Children's electric keyboards are usually battery-powered, which will mean that they cost more in the long run. When the batteries are running low, the musical quality of the notes produced by the keyboard can be affected, making the keyboard emit sounds that are rarely tonally pleasing.

Remember: the more expensive a child's electric keyboard, chances are the more likely it is to break. Many children's keyboards cannot play chords, and only emit one note at a time.

Many cheap electric keyboards come with a volume control that has a limited number of settings; Deafeningly loud, Extremely loud and Rather loud. For no known reason, the keyboard will automatically choose 'Deafeningly loud' mode each time it is switched on, no matter how many times you try to reduce the volume.

Electric keyboards often come with a 'Demo' button. This, when pressed, will play traditional tunes such as 'Greensleaves', 'London Bridge is Falling Down', 'Twinkle Twinkle Little Star' and 'Baa Baa Black Sheep' endlessly until deactivated or the batteries run out. While the batteries are running down, the noise emitted can perhaps best be described as 'Baa Bridge Green Bridge Twinkle Twinkle Wool', only at the Deafeningly Loud level.

Electric keyboards also often feature buttons that change the sound of the keyboard to represent different instruments, such as violin, flute, organ, didgeridoo etc. Despite the whole wealth of musical sounds on offer, the only selection your child will choose is the one marked 'animal noises'. When selected, any note on the keyboard will make a noise, such as a roar or chirp, seemingly at random. When this option is chosen and the demo button is depressed, you will be treated to a rendition of 'Twinkle Twinkle Little Star' that begins 'Moo-moo meow-meow woof-woof meow' and will play eternally until deactivated or the batteries run out. When the batteries are running low, this will sound even more dreadful. Your child, on the other hand, will think it sounds great and will want to listen to it non-stop.

The choice time for a child to play with an electric keyboard or xylophone is often around 4:30 in the morning, when they will want to share the experience with you, no matter how much you try to dissuade them of this.

So is it better to get your child a xylophone or an electric keyboard? The answer is probably that it may be better to invest in a good set of ear plugs. Inevitably, sooner or later, your parents will give your child the fanciest, sleekest keyboard on sale in the shops, with more buttons (though none of them labelled 'Volume Down') than any other. It's their way to get their own back for the musical torture that you inflicted on them at 4:30am when you were a little child...

1Technically a xylophone is wooden, with the word from the Greek for 'wooden sound'. Despite this, the term is frequently used to apply to all musical instruments struck by mallets containing wooden or metal strips or bells. Children's dictionaries that show 'X is for Xylophone' often have pictures of instruments which an orchestra would class as a glockenspiel, metallophone or bell lyre rather than a true xylophone.