We present a new player in the universe… 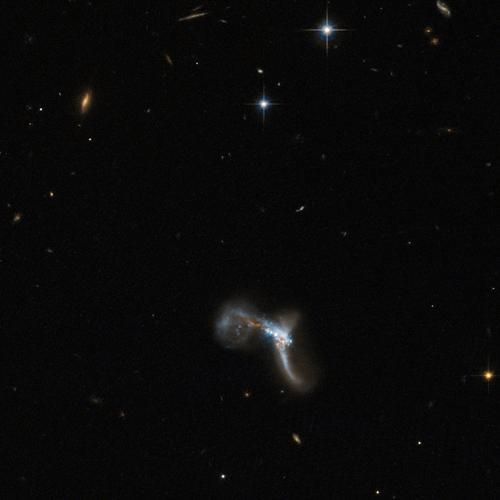 PICARD: Well, I know this is all pretty dry stuff. Stellar cartography isn't everybody's cup of tea.   –   Star Trek: the Next Generation, 'Lessons'.

You've got the most powerful telescope in history trained at the stars. You're seeing wonders. Humanity's eyes are going where no one has gone before. It's a problem, though, naming all those fabulous galaxies. 'IRAS 22491-1808' sounds so clinical. You study it...wait! You know!

Wonder how they thought of that.

Why is it interesting, besides the fact that it looks like something else? (Your pizza-box stains can do that.) Let's let NASA tell it – it's their telescope, after all:

In this image, the twisted shape hides a number of features. In the central region, which is very complex and disturbed, scientists have been able to distinguish two nuclei, remains of the two different galaxies that are currently colliding to form a new one. IRAS 22491-1808 is among the most luminous of these types of galaxies, and is considered to be mid-way through its merging stage.


The center of this appealing object also shows several intense star-forming knots which, as seen in the picture, actually outshine the nuclei in optical wavelengths. To pick out the two merging nuclei in IRAS 22491-1808, scientists have had to observe it in infrared wavelengths, where they are more distinct.

See? Maybe it's not Picard's cup of Earl Grey (hot), but it's pretty darn fascinating. Hubble images: don't leave the home planet without them.