So many people have been bugging Spimcoot about how he became so famous, we thought we'd ask him. Here's the story from the horse's mouth, so to speak.

A History of the Start of Spimcoot: From Paper Cuts to Eustace to Being Published

A fire blazes pleasantly in the grate making the noise of a foley artist crumpling cellophane just out of shot. In a leather wing-back chair worn with the passing of many arses sits a man, similarly worn. A fine coating of dust makes him appear older than he is. He creaks into life as if activated by a penny in the slot; that is to say, slightly startled.

Good evening, good evening. Thank you for joining me here at 172b Glibbm . . . no, stop, stop. Charles, this is ridiculous, I can't stroke this thing and keep my composure . . . mm? I know you wanted me to interfere with a beast of some kind . . . stroke a pet then, however you like to phrase it, but I told you, a stuffed alligator just isn't dignified. Ask Lord Fotheringay, it's he with which the alligator is stuffed! It was his Mother's I believe. No, actually it's spelt Fotheringay but pronounced 'frothing homosexual' . . . Look, just put it back in the bad cupboard, I don't want my television debut to look like spanky time with Theresa May. Righty, let's take it from the top . . .

Good halloa to you, and welcome to 172b Glibbman Mansions, the address of the famous Cartoonists' Lounge . . . sorry Charles, but I tell you what I could fondle . . . have a rummage in the good cupboard there, you're looking for a plaque. Charles, really! Does that look like a plaque to you? Honestly man, no wonder they booted you out of the bordello. There we are, that's it, the spimcoot armorial bearing. Ech! Take that merkin off it. That's better, now you can see it in its full glory: the coot rampant on a bend sinister across a field of coot d'azure. Fair makes a man stand proud.

The man is handed the plaque and weeps upon it; the tears forging tracks in the dust on his cheeks make him appear ravaged by snails. After a minute he is handed a bottle of scotch to dry his eyes.

I'm better now, Charles, really I am. Take this thing away – no, the plaque you fool. Okay, let's go from that bit near the end.

And so, after that journey of such sexual depravity it would make a pope blush, I sought refuge here and the rest, as they say, is what I'm about to tell you. Douglas Adams had recently had his particles arranged in an order less tangible to the casual observer but one which made getting about the universe somewhat easier, and the report of this event on the news led me to the strange country, h2g2. The internet is a good place to foist one's etchings on an undemanding public, so I sought out The Post and passed them whatever they would fence. It was a mixture of stuff knocked off from my younger self and other things robbed from my future and we called it Paper Cuts. Mostly they were single picture cartoons but later I seemed to add great strings of waffle to them, and this gave me The Idea. I would stage an audacious heist, stealing from my future self a graphic novel which I would cut up and melt down and pass off as the seminal idea behind that later work. Think of the rewards! Obviously, if I'd have thought of the rewards I'd never have pulled off such a ridiculous stunt but there, I was young, I was foolish, I didn't need the money . . . Charles, I'm dribbling, pass me another . . . thank you m'boy. Thirsty work this fessin' up.

The first half of 2003 was spent in a flurry of montage sequences peeling like calendar pages as I hacked and filed and sawed at that story' – Eustace– making it seem as if it were made up each week and thrown crudely onto the page. In the second half of the story this became literally true as I glued together a collage and added to it each week, using other people's art to disguise my own. I found a hugely pompous website which thought that all art after the pre-raphaelite movement was an abomination. It was full of paintings of naked little girls in frankly dubious poses. I pinched some of these images and made them grainy and printed them out in black and white and stuck them to my page. They looked like newsprint and the BBC, which in those days owned h2g2, thought they were photographs and saw fit to have me censor them, which I was happy to do with the traditional black bars because it made them look raunchier and it was the perfect culmination to my unspoken revenge on the backwards looking art lovers. I had eyes only on the future, but therein lay my downfall.

The man flaps a hand weakly at Charles and sinks back into the chair, temporarily spent with the almost orgasmic outpush of confession. A team of make-up artists abseil in and reapply dust to his craggy visage. Grime is carefully eased under his claw-like fingernails; some of it probably contains DNA. The floorboards tilt and the make-up team descends from view. Charles applies another bottle or two of scotch; he is a skillful and experienced director. We are ready to go again . . .

There I was, hilt deep in my plan. July 2003. But while my eyes were fixed firmly on the future I didn't notice an older version of myself creeping round behind me. He tapped me on the shoulder and I made a fatal mistake: I looked back. Bastard stole all my hard work back off me and made good his escape. Okay, so he didn't get everything: phase two of Eustace was barely begun when he struck. Nevertheless, I vowed to make him suffer. It would take me nearly ten years to track him down but . . .

The man leans forward in his chair, menacingly staring into the camera. Something eerie starts to happen as he claws at his face: the skin seems to peel and lift away. It isn't skin, it's a mask! Now that he has purchase, he pulls it all off in one go to reveal . . . exactly the same face!

It was me all along! Me I tells ye! Ahha ha haah! Meeeeee! And now I'm going to reap what should have been his!

There is silence in the room, everyone too bored to speak.

Was that all right, Charles, love? Not too much was it? It'll do? Yes, that's my feeling, let's get down the pub. Surprisingly itchy, cartoonist's skin . . .

The walls of 172b Glibbman Mansions pull away back into the recesses of the cavernous studio as the wardrobe team, dressed as high-kicking showgirls, rip away the shabby costume from the man's frame. He pulls himself upright, his taut, sinewy muscles leaping back into their natural poise from the hunch he has held so expertly. He starts to take a last swig from the dwindling bottle but looks with distate at it. 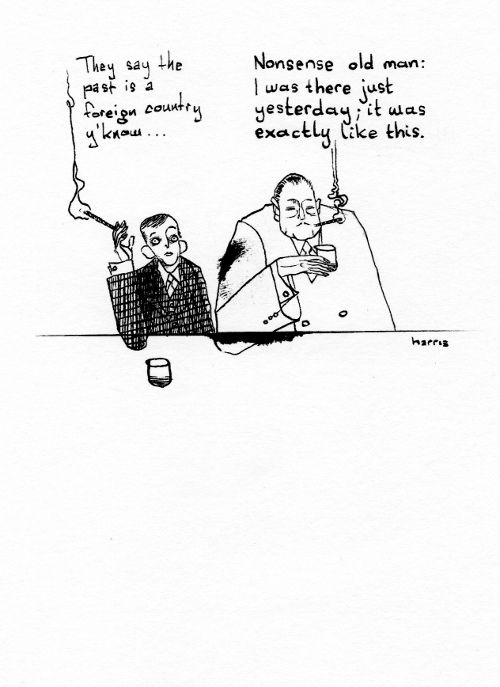 One forgets when one is so in character. I'll just leave it here for . . . it. A nice touch that will look well in my autobiography. Where's my ghost writer? Mantell, over here this instant!

He walks away surrounded by his coterie, off set and out of the vast studio doors as the lights turn off one by one. The crew are packing away and leaving too but, as the lights go out, a shuffling, scuffling noise is faintly heard. The last of the crew looks nervously around before hurrying away, crying 'wait for me you guys!' The bottle of scotch stands alone in the middle of the studio floor, caught in the shaft of light from the closing doors. It glows like brown gold. As the shaft dwindles, the scuffling grows louder and, just before the doors shut extinguishing the light forever, a gnarled hand leaps into frame and snatches away the bottle. The hand looked ... I mean, it was only a brief glimpse, but it looked raw. Bloody. Skinned, almost. The doors shut with a huge, echoing clang which seems to be the sound of the death of light. A horrid giggling punctuates the glugging of scotch. It is replaced with the sound of weeping.