It's A Book Launch, Daaarling!

Tucked away in a back corner of the top floor of a Waterstones bookshop on Gower Street in London, a book launch was being held. We got there quite early, we'd been told there was free fizzy wine. The bookstore was closing in half an hour, and at half six on a Friday night in central London, people weren't shopping. They were either in the pub for a few drinks before catching their trains home, or were already stuffed into the carriages as they rumbled their ways into the suburbs and beyond. The place was spookily quiet, even for a bookshop.

As we climbed the last flight of stairs, and started down the aisle between the shelves towards the back, a gentle murmur of noise was growing from a small group of people visible in the distance. And then we heard, rather loudly, "Oh Daaarling, I'm soooooo glad to see you!" 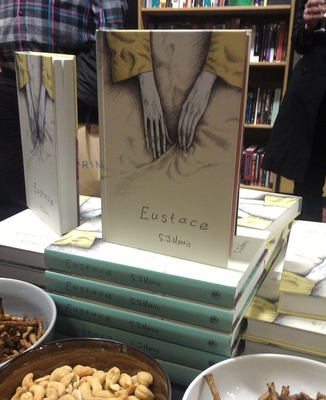 Yes, it was a book launch alright.

And there taking pride of place right as you went into the reserved area was Eustace. A small display of the books out for people to see, to pick up and browse through. It really is a lovely-looking book, very well put together and presented; it's hard not to pick it up. The second thing that stood out from the small crowd that was forming was Spimcoot himself. Dressed in his usual elegant fashion and being mobbed by the mob. Well, we aren't afraid of mobs, so we barged our way in and gave him a big hug, none of this firm shake of the hand or air kisses for us, we actually like the bloke.

After some brief words, congratulations and such "Well done old bean" we spotted the drinks table and left Spimcoot to the adoration of more people turning up. Planting ourselves firmly next to the free fizz we were able to watch the rest of the throng. Whilst snaffling the odd bottle of cava carelessly left unattended. I think it's fair to say that Spimcoot wasn't quite sure what to do, it was the launch of his first book, and all these people were here because of him, and for him. He truly was the centre of attention and whilst at times I think it might have made him a little nervous, he handled it beautifully. Not only was his dress sense impeccable, so were his manners. Trying throughout the night to make sure that everyone was greeted and having a good time.

As the drinks got into full flow, they were cut short for a speech. A chap from the publishers Jonathan Cape gave a short introduction, describing Spimcoot as "At least in the top three of the most talented artists" that they work with, and considering that they also publish Raymond Briggs and Robert Crumb this is no small compliment. He also said that Spimcoot is the best dressed, but we all knew that. A short speech followed from Spimcoot, where he took the opportunity to thank people for coming, and to encourage them to buy the book. Applause was given, and more drinks were poured, and the party then carried on.

Eustace has been ten years in the making, and all 269 pages of it are exquisitely illustrated. Chatting with Spimcoot during the evening we found out that there's another three Eustace books planned, each set at twenty year intervals in the life of the main character, and he's hoping it'll be less than ten years before the next one comes out. 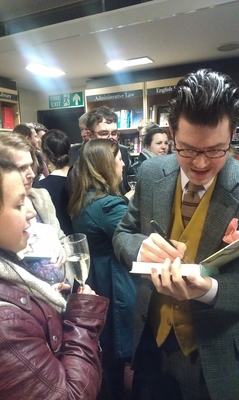 People kept coming up to us perched near the wine to ask if they could borrow a book for a photo; wondering why they didn't just buy one we soon found out, they'd sold out. All of them. The entire pre-sale stock had gone, and there were still people wanting to buy some who had to go without. It may not have helped that we bought four, but you can't help but wonder that a major bookstore putting on a book launch through a major publisher will have known how to do these things, I can only assume that normally when people go to book launches they don't actually buy the book, they're just there for the free drink. Which was now running low, so we snagged the last bottle and watched while those that had managed to get a copy of Eustace were getting them signed. Spimcoot had brought along his very own fountain pen for just such a thing.

It was busy, and it was quite loud, and the people in the bookshop wanted to go home (actually they just wanted to lock the shop up and come along to the pub with the rest of us). So in the best traditions, the book launch was over, and the party moved on.

I've not managed to read more than a few pages of the book yet, but what I have is gripping. Wonderfully penned both in illustration and tale, and I want to read more.