Writing Right with Dmitri: How to Accentuate the Positive

Over the Thanksgiving holiday, Elektra and I O.D.'d on sliced turkey, lemon cream cheese pie, and a TV series called Touch. The series was as satisfying as the food – warm, funny in places, able to bring a tear to the eye, and truly international in scope. A lot of the scenes were in languages other than English, which we enjoyed. An amazing accomplishment for US television.

The premise of the show is that an eleven-year-old boy has a quasi-mystical ability to connect the dots around the world and influence events for ordinary people. A boy in Baghdad, whose ambition is to become a comedian (just like his hero, Chris Rock), talks to a burnt-out roadie in New York online: our miniature hero, trying to fetch a kite from the roof, adjusts the roadie's satellite dish, causing him to send a message in error. The kids in Baghdad, misreading the message, overload their amplifier, shorting out the electricity in half the city – and, incidentally, saving the lives of two US soldiers, one of whom is a good friend. Yeah, like that. Cool writing, there.

After watching the series, I went googling to see what the critics thought. I was disgusted: over half the TV commentators used the word 'manipulative' to describe the stories.

In other words, if you skew your plot to accentuate the positive in human experience, you're being manipulative. On the other hand, if you write stories about serial killers and terrorists, and everybody falls down and goes boom, well, it's 'ripped from the headlines'.

What do we learn from this? If we want people to believe that good things are possible, we've got to work harder.

Let's give it a try. Let's take a picture prompt and write a mini-story about it.

The Rest of the Story 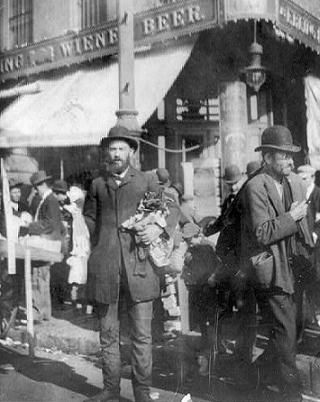 Avram stood on the busy streetcorner. He had his arms full of socks, pockets full of socks. At home, Rivkah sat knitting socks in an apartment piled with socks. He was the Sock King of Hester Street, thought Avram. Oy, what a way to think of yourself. Back home in Glod, he was the most promising boy in the yeshiva. What he should be doing now was reading Torah. He should be studying, praying. What was he doing? Selling socks. On a corner, in Hester Street. His feet hurt. At least they're warm, he thought bitterly. I have enough socks. Rivkah shouldn't be knitting. She should be keeping house, playing with the babies, talking with the other women. But the other women were working, too, sewing things to sell, or out in the sweat shops. . . Where were the customers? If he didn't sell enough socks, he wouldn't have the money for the landlord. What a life. . . America, land of opportunity, indeed. . . Avram was thinking so hard he didn't even notice the man who passed by him, bumping him, stealing the pennies from his morning's sales from his pockets.

You think this version is gloomy? It's not a patch on the kinds of stories people wrote who really lived on Hester Street. Hutchins Hapgood, in his Spirit of the Ghetto, summarized one short story about a peddler who ran into difficulty after difficulty, only to find out that at home, his wife was going into labour. . . he had tsures, big-time. But I didn't want to make my description too much of a downer.

Let's try for some uplift, in the spirit of Hester Street:

Avram shrugged. 'Sorry, I left my watch at home. Too many thieves. But there's a clock around the next corner.' The man thanked him, and moved on.
Oy, thought Avram. A disappointing day. Too many socks unsold, too many bills to pay. Rivkah worked so hard on them, I want I should buy her something nice for dinner. . .

To pass the time, Avram thought of the kabbalah. He imagined the sephiroth, one by one, bottom to top: Malkuth, where he was, stuck in reality, stuck on tired feet, standing on the corner, waiting to sell socks. Yesod – what he needed, a plan, a way to get ahead. . . Hod, Netzach, Tifereth, how to balance the energies of the world, return to the source, to the Ayin Sofit? Gevurah, judgement. . . Avram became so lost in thought, the man had to speak twice.

He smiled. 'How much? For the socks? They look very warm.'

'All of them. I need socks for a whole football team. They wear them out, you see, over at St Mary's. Sister Eustacia said she saw you here most days.'

Avram hardly understood. Saint? Mary? What was a football team? Who cared? They needed socks. . . He quoted a price. The man accepted. Goods were exchanged, he could go home. But first, to the butcher's. A nice shtick flaysch.

Running up the steps, Avram thought again of kabbalah. The next sephira. . . Chesed, kindness. . .

What do you think? Which version is less manipulative for you?

Your assignment, should you choose to accept it: take a turn with the next picture. Write one or two versions of your own. What's easier – manipulating us into believing in a negative outcome, or a positive one? You be the judge. 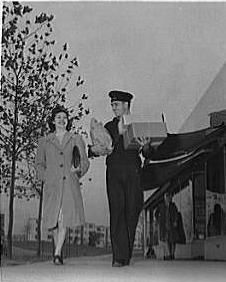 As a helpful hint, the Library of Congress offers this caption for our picture:

I'll carry mine. As patriotic on leave as he is on shipboard, this sailor on furlough keeps America's wartime pledge to save tires and gasoline by carrying the family purchases. Note that the young man's wife carries only her own handbag: husbands please observe. (1942)

Send your versions to postteamhg-at-gmail-dot-com.