Moringa: Phantom Tree of the Desert 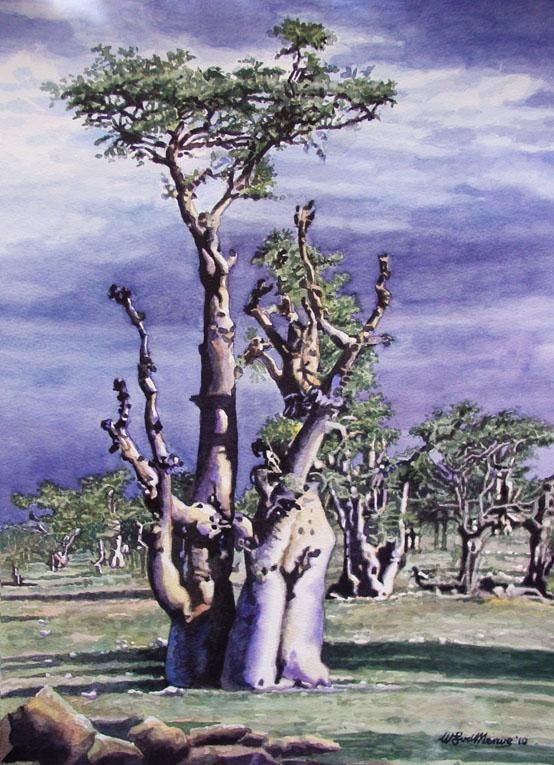 Today’s installment features the Phantom Tree, Moringa ovalifolia. This species is also known as a Ghost Tree or African Moringo. In Afrikaans we call it a Meelsakboom (Flour-sack Tree) or a Sprokiesboom (Fairytale Tree). These trees grow in the wild in our neighbor country of Namibia, extending into southern Angola, in dry and rocky places, from the edges of the Namib Desert to the slightly more hospitable Mopane woodlands, but most often on the rocky escarpment. There is a place called the Fairytale Forest in the Etosha National Park where these trees grow in large numbers, creating a most surreal landscape. The first painting shows a particularly handsome tree in that forest, on an uncharacteristically overcast day. I would love to visit that place and take some pictures myself some day; so far I’ve only been in Namibia once, and in the South, whereas this strange tree is more characteristic of the North. 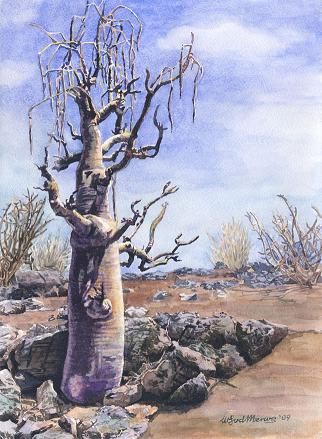 The Phantom Tree is indeed a very unusual looking species. Most of them have markedly swollen trunks, sometimes having rather grotesque shapes. From this thick trunk a small number of branches ascend, and bear the large and doubly divided leaves only in Summer, the tree standing bare during the long, dry Winter. The bark varies from brownish to a light silvery grey, almost white, the light colour being more effective at reflecting the intense sunlight to keep the trees from overheating and drying out. The thick trunk is soft and rather succulent instead of being woody. The roots are fleshy as well, and along with the bottle-like trunk help this tree to store and conserve water over the many extended drought periods it is likely to encounter. It is a small tree, reaching 7 m/23 ft in height at most, but it may frequently be one of the tallest and most conspicuous plants in its barren native habitat. The trunk can reach a thickness of a meter/yard. It does grow along with many other weird, thick stemmed and succulent plants in Namibia, including Baobab Trees and others that I still aim to cover for Phyto-Philes such as Kobas (Cyphostemma), Bottle trees (Pachypodium lealii), species of Euphorbia, Commiphora and Adenium. 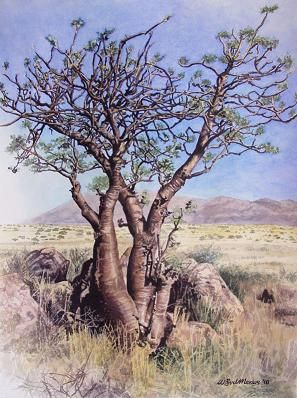 The Moringas constitute a single family, the Moringaceae, also all belonging to the single genus Moringa, of which this species is the only member occurring in Southern Africa. There are thirteen known species in total, most in Northwestern Africa, but three species are confined to Madagascar, two occur in India, and one in Arabia. The species vary from small shrubs to tall trees, some having the thick bottle-shaped trunks, but some being slender. The most famous member of the family is the Drumstick Tree or Horseradish Tree, Moringa oleifera from India, which is widely cultivated for its very nutritious leaves and seeds. These might actually constitute a very underutilized source of nutrition, the leaves and seed pods being rich in protein and vitamin C respectively, and suited for human and animal consumption. The name ‘Moringo’ is a Malabar term for this species. These trees are especially valuable for being drought resistant and able to grow in many areas of the world that frequently experience droughts and famines. Mature seeds yield a high quality edible oil called ben oil, which also has been investigated as a possible biofuel. The roots are said to taste like horseradish. The plant has numerous medicinal uses as well.


The Phantom Tree is not as practically useful to humans as its relative the Drumstick Tree is, being much more slowly growing, but in their native areas they are often browsed by game. Not just the nutritious leaves are consumed, but elephants and other large browsers will also eat the succulent branches or even the trunks themselves. Porcupines will also gnaw at the bark and trunks. This may even have an effect on the strange and distorted shapes these trees eventually grow into! Local peoples also sometimes eat the bark, stems and roots, but the practice doesn’t seem to be very widespread. The Phantom Tree also bears pods like those of the Drumstick Tree, but these release dry, winged seeds that use the wind to distribute them. They don’t fly very far, though, and in nature the Phantom Trees are usually find in small groves spaced fairly close together.


Phantom trees can be cultivated, and I managed to germinate seeds that I bought from Silverhill Seeds but unfortunately mine all wilted because of conditions having been too wet! Next time I will make sure not to overwater them. This is a common vulnerability of desert plants, but treating seeds with a fungicide can increase the survival rate of the young plants. They prefer a well-draining soil but are tolerant of mildly alkaline to mildly acidic growth media. The trees are fairly slow-growing, but very ornamental. The large, drooping leaves, reaching 60 cm/2 ft in length, are handsome during the Summer, while the starkly bare, thick trunks are striking in Winter. As soon as the plants lose their leaves, watering should stop and only resume at the onset of the next Summer. Phantom trees cannot stand frost and in cold regions have to be grown in hothouses. They also like a lot of sun. They are ideal for rock gardens along with other fat-stemmed plants, best growing on a north-facing slope in the Southern Hemisphere, or a south-facing slope in the Northern Hemisphere.