Our Researchers Boldly Go. There is no area of Life, the Universe, and Everything that is beyond their curiosity. Here, Rosie asks the h2g2 question. . .

Do You Enjoy a Good Sneeze? 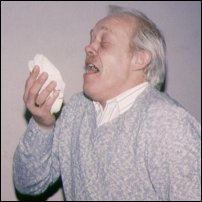 Do you enjoy a good sneeze?

Well I do! I have often been admonished about sneezing at such a high velocity, followed by the comments of "Do you have to?"

The answer is always "Yes!"

Of course I could always suppress said sneeze, but it quite often feels as though my ears will blow out along with my throat! It hurts!

As a youngster I would lie in bed in the early summer mornings knowing already that it was going to be a good day as I would hear my father down stairs sneezing with such gusto it still brings a smile to my face. . . You see, he suffered terribly from hay fever and as it was in the days when anti-histamines were just a figment of some poor sufferer's imagination, sneezing was his only option. My father was a good man – in fact he still is – and would take us on numerous family picnics and lie there, bless him, with a hanky on his face sneezing. . . poor man.

Which leads me back to the question – do you enjoy a good sneeze? I do not suffer from hay fever. Well maybe a little, but just the itchy eye thing which plays havoc with the old mascara and eyeliner! But too many people in my mind stifle sneezing and thus sound ridiculous. . . a bit like a cat, coughing up a fur ball, or just squeaking repetitively into their hand. . . not at all as satisfying as letting rip! I like to describe a good sneeze as 'Raising-the-Roof', something that my father did regularly.

My daughter has also taken up the baton, she also does not suffer from hay fever, but has the ability to do just that – Raise-the-Roof ! My son is a sufferer. . . he raises the roof. It makes me smile in the same way it made me smile all those years ago waking to the sound of birds singing and my father sneezing. However, my other half just stops whatever he's doing and asks that silly question. . . "Is that completely necessary??"

Sneezing is so satisfying, some say orgasmic, and well worth the effort. I'm always left with a wonderful afterglow and a feeling of inner calm.

It makes me wonder if sneezing is a product of nature or nurture. . .