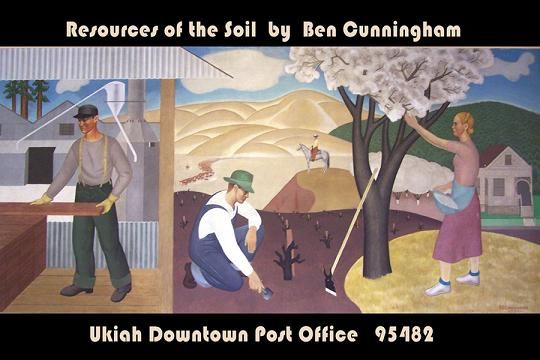 American artist Pat Cunningham painted Resources Of The Soil for the Ukiah’s post office seventy-four years ago. The mural depicts ordinary people engaged in the occupations that continue to drive Ukiah’s local economy. In the painting, a man cultivates his crop, a woman harvests fruit, a millwork stacks lumber, and a rancher watches his herd. Soon Cunningham’s mural will no longer overlook the bustling small town post office. Ukiah Downtown Post Office will be shuttered at 4:45 pm, January 13, 2012, and the mural itself faces an uncertain future.


During an earlier period of economic upheaval, the current edifice was constructed on the site of Ukiah’s original wooden post office. The Work Progress Administration (WPA) sought to ease the Great Depression’s widespread unemployment by hiring people to perform needful tasks, such as building over 1,100 post offices across the nation. Ukiah’s New Deal post office was completed in 1936.


One percent of a New Deal post office’s construction costs were set aside to adorn the building. Cunningham was among the many artists and artisans hired to decorate buildings. When some politicians complained about the extravagance of hiring artists, President Franklin D Roosevelt famously explained, "They're workers, and they need to eat, too."


Fast forward seven decades to the Great Recession, and Ukiah will lose its New Deal post office. Pundits and politicians dismiss the importance of a small town post office in these days of email and instant messaging. In rural areas, however, many households don’t have Internet connectivity. Local businesses and many community members rely on the post office for reliable, reasonably priced mail and package delivery.


USPS executives say post office closures are the only way staunch the hemorrhage of red ink, pointing to a expected $14.1 billion shortfall next year. Critics say the shortfall is the direct result of a Bush-era law that requires the Postal Service to pre-fund retiree health care for 75 years into the future in only 10 years time. No other agency is mandated to pay for the future health care of retirees who have yet to be hired. If that law were rescinded, financial analysts say the Postal Service would have shown modest gains even during the Great Recession.


The USPS promises to preserve Cunningham’s painting when the building is sold. Perhaps Resources Of The Soil will end up in a museum somewhere. Whatever the mural’s fate, it likely will not be in a public space for future generations of Ukians to enjoy.