It all started soon after our arrival in New Zealand complete with Resident's Visas. OK, but now
these (long list of) formalities are to be completed and signed... not knowing anyone except Dorty,
her hubby and our grandbaby, what to do? Find a JP (Justice of the Peace), that's what. The service
is allied to CAB (Citizen's Advice Bureau) (which Ms Stress joined later) and the service is free.
Free, that is, except on this occasion because there was, well, not so much a price as a touch of arm-
twisting...

...On arrival at one of the town's four Probus clubs ... and pause here for a mo...
Probus, that's PROfessional and BUSiness, is a branch of Rotary that's intended for, well, just that
sort of people. I'd heard of it before but had had no contact. Here though, it's been somewhat, er,
what's the opposite of corrupted? Here it's simply an excuse for being sociable.

we were introduced around and a few days later I found myself, arm again twisted up my back,
being frogmarched to the North Canterbury Woodcraft Club at Northbrook Studios on Northbrook
Road, an enclave set aside for the community by the council and also used by the Rangiora
Players, the Brass Band, North Canterbury Musical Society, Aikido and Judo clubs. This one, our
clubhouse, was an old wooden church hall, lifted, shifted and resettled here in 1995 – and is hoping
for a new tin extension (soon maybe?).

Another few months and:

Eight of us started the course, four raw beginners and the other four having varied amounts of
previous experience, with me towards the lower end. Two of the beginners being female and one, a
bit young really at sixteen, subsidised by the club itself.
And off we went. Easy for those four of us. But not for long, oh no.

After some twenty-eight weeks of instruction, practice, sweat, tears and homework, Graduation Day
eventually arrived. The final test, for display and judging, was a project for each of us. Just for a
change, the subject was to be of our individual choice.
The brief for the project, given some months previously, was to design, make, fabricate and build
a display for Woody the Wood-merchant to put in his reception area. It was to sit on a 600mm x
600mm (2' x 2') tabletop against a wall or in a corner. A significant proportion of the piece was,
naturally enough, to consist of 'turning'.

The candidates started to arrive at the venue (Millbrook Centre, off Northbrook Road, Rangiora)
shortly before 5:45pm on That Day, in order to display their wares. Setting-up was accomplished
by 6:30 (well, more-or-less), with not too much humming and hawing, and by which time guests were
arriving.

It was tolerably obvious that every one of us was interested in what was on display – for a certainty,
at least one of the students was agog to see what the others had done – and he was not to be
disappointed.

Display Tables, from left to right, top to bottom: 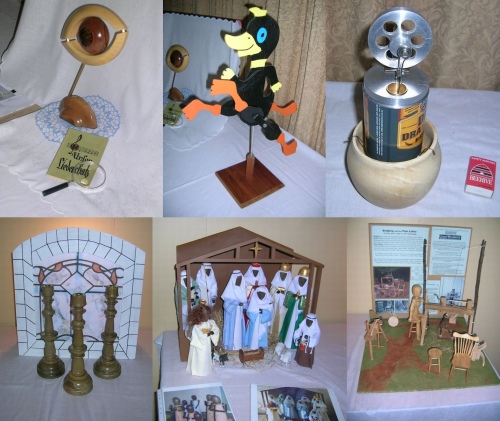 – H's eye-on-a-stalk was demonstrably expert – and a highly decorative affair.

– B's Roadrunner (it was, wasn't it?), an offbeat interpretation of 'turn' – its four legs (two each side)
did, to great effect (of the cartoon bird).

– J's working, candle-powered Stirling engine, built on a beer can, is a notable piece of miniature
precision metal-turning (he's the youngster).

– F's Nativity scene with animals and nine dressed figures will no doubt be on display, deservedly,
every Christmas for some time to come. (Oh yes of course, there was a baby there, too...).

– Rod's effort was an illustration of one period of our craft's history – the pole lathe and Windsor
chair.

A satisfying dinner of pork, chicken, three veg and gravy followed by cake or sticky-date pud was
enjoyed by all.

Somehow, among everything else going on, our projects were dismantled and re-consigned to
(temporary) oblivion in car boots.

A short speech by N (instructor and club president) was followed by the address from the Aoraki
Polytechnic representative and... and...

... And, Yes, all of us received our certificates. No doubt they'll all be framed and affixed firmly to
the dressing-mirror.

... Ah. Now. We also found out that the instructors, N (president) and N (club stanchion) did, and
are continuing to do, this without any remuneration.
Methinks I speak for all - we salute you.
Methinks, too, that we can best acknowledge by encouraging interested youngsters to take up a
trade and develop it into a craft (preferably of course but not necessarily, woodturning). 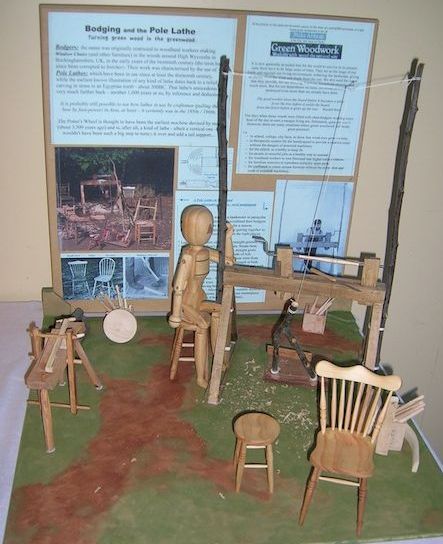 The project I chose was to display a mock-up of an early twentieth century woodland operation, originating around what was then Chipping Wycombe and is now High Wycombe, in Buckinghamshire, UK.
The produce of those operations became typified by the Windsor Chair and this project is to 1/5 scale (or thereabouts). Do note, however, that the "mannikin" was a piece of homework from rather earlier in the course, which just happened to be about the right size.

Illustrated is an indoor version of the pole lathe – the woodland version would have needed a display at least twice the 600mm (2ft) square size allowed as the poles weren't likely to be less than 4m (12ft) long (say a metre/3ft, to scale), arching over the lathe at not much less than this height.
Also illustrated is a shaving horse and two of the products – a stool and a chair – plus spare pieces for assembly into the next items.

The cord from the pole (in this case the rope between the poles) is wound around the workpiece in such a way as to rotate its top towards you and the bit nearest you down, when pushing the treadle. The chisel, on a toolrest to stop it rotating with the wood, is advanced into the work on that downstroke and withdrawn when the treadle is released (and the pole springs back). As you can imagine, this results in a rhythmic action. The wood is green/damp (not seasoned) so is very much softer, more easily worked, than a similar piece if seasoned/dried.

All the pictures on the panel above and the words (adapted) below are used by kind permission of a well-known green woodworker in the UK,
Mike Abbott, in his first,1989, book
Green Woodwork.

It is now generally accepted that for the world to survive in its present state there have to be large areas of trees. They act as the lungs of our Earth and regulate our living environment, softening the landscape, giving us shelter from the wind and shade from the sun. We also need the wood that they provide, for our housing, furniture, household utensils - and much more. But for our dependence on trees, we would probably have destroyed even more than we already have done.

The days when those woods were filled with chair-bodgers working every hour of the day to earn a meagre living are, fortunately, gone (for ever?). However, there are many situations where green woodwork still holds great potential, e.g.

Common practice was for a landowner to prescribe areas of broadleaf (hardwood) woodland then bodgers would acquire the rights for a season.

You can imagine groups of bodgers getting together to share, if the right trees weren't in the right places.

Bodging and the Pole Lathe

Turning green wood in the greenwood

Bodgers: the name was originally restricted to woodland workers making Windsor Chairs (and other furniture) in the woods around High Wycombe in Buckinghamshire, UK, in the early years of the twentieth century (the term has since been corrupted to botcher). Their work was characterised by the use of
Pole Lathes which have been in use since at least the thirteenth century, while the earliest known illustration of any kind of lathe dates back to a relief carving in stone in an Egyptian tomb – about 300BC. That lathe's antecedents go very much further back – another 1,000 years or so, by inference and deduction.

It is probably still possible to see bow lathes in use by craftsmen (pulling the bow by foot-power) in Asia, at least – it certainly was in the 1950s / 1960s.

The Potter's Wheel is thought to have been the earliest machine devised by man (about 3,500 years ago) and is, after all, a kind of lathe – albeit a vertical one – it wouldn't have been such a big step to turn(!) it over and add a tail support...